The following news release was issued by the Sanford Underground Research Facility, site of the Homestake Mine where Raymond Davis Jr. of Brookhaven National Laboratory conducted his Nobel Prize-winning research on solar neutrinos. 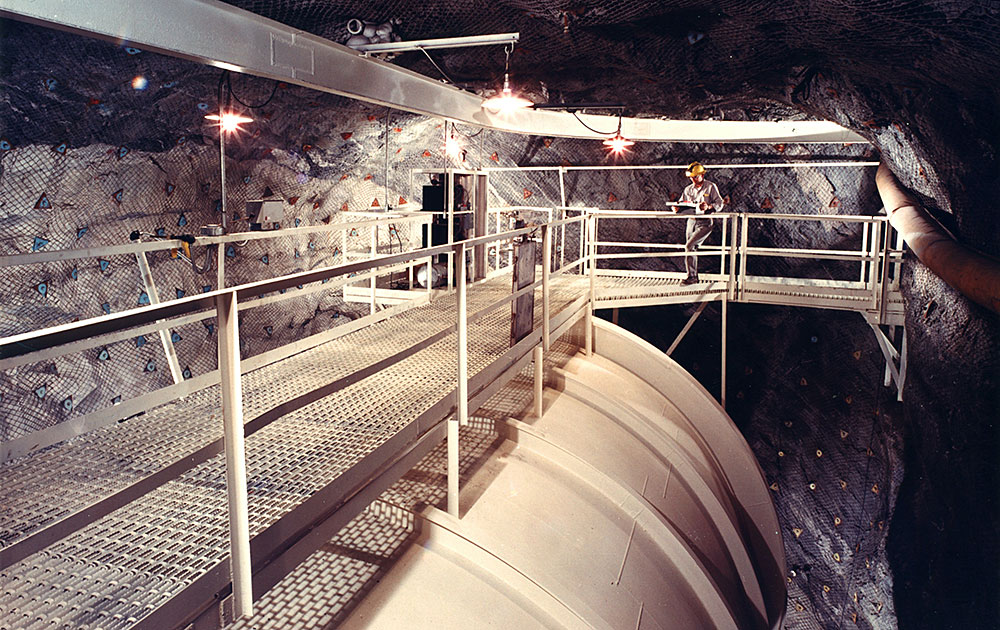 About a mile under solid rock in South Dakota's Homestake Gold Mine, now the Sanford Underground Research Facility, Brookhaven Lab chemist Raymond Davis Jr. set up a chlorine-filled detector in 1967 to measure neutrinos from the sun. His work proved that fusion provided the energy from the sun and earned him a share of the 2002 Nobel Prize in physics.

The American Physical Society (APS) today announced it has designated SURF one of two Historic Sites in physics. The other, Morgan State University in Baltimore, Maryland, is recognized as the birthplace of the National Society of Black Physicists (NSBP).

The APS Historic Sites Initiative works to increase public awareness of noteworthy physics-related events and discoveries. Each year, APS chooses a select number of member-nominated sites to be formally recognized, using a number of criteria to select the sites, including significant contributions of the site or an individual to the advancement of physics on a national or international level.

“Ray Davis’ work to unlock the mysteries of neutrinos has served as an inspiration to neutrino researchers for more than five decades,” said Mike Headley, executive director of the South Dakota Science and Technology Authority, which manages SURF. “His legacy lives on in experiments around the world and in our efforts to educate the next generation of scientists and engineers. We are honored and proud to receive this designation.”

For nearly three decades, Davis counted neutrinos from the Sun on the 4850 Level of the Homestake Mine (now the Sanford Underground Research Facility). And for nearly three decades he consistently saw just one-third the number of neutrinos he expected to see. Where others may have admitted defeat, Davis continued counting every neutrino that collided with atoms in his 100,000-gallon tank of dry-cleaning fluid.

A chemist from Brookhaven National Laboratory in New York, Davis’ methodic approach to understanding neutrinos forever changed physics and earned Davis a share of the Nobel Prize in Physics.

Anna Davis, widow of Ray Davis, said in an email, “I am delighted to hear that Ray's ‘cave’ has achieved this significant honor. That hole in the ground in South Dakota was the center of his life for many, many years. Although he was also an enthusiastic sailor on Long Island's Great South Bay, he told our son Roger in his very last years, ‘Boating is fine, but it's thin soup compared to neutrinos!’"

Today, the 4850 Level of SURF is home to several international experiments. The depth of the facility shields sensitive technology from cosmic rays, making it an ideal location to study particle physics and astrophysics, as well as other disciplines in the sciences. Long before it became the United States’ deepest underground research laboratory, the Homestake Gold Mine was the site of Davis’ solar neutrino project.

“The experiment was an extraordinary achievement, involving painstaking observations in a 100,000-gallon tank, deep underground, extracting and counting argon atoms,” said Caltech science historian Diana L. Kormos-Buchwald, Chair of the APS Historic Sites Committee. “Davis and his collaborators demonstrated that nuclear reactions powered the Sun and provided the first evidence that electron neutrinos created in the Sun arrived at the Earth having transformed in flavor.”

From 1962 to 1994, Raymond Davis Jr. built and operated the first successful detector for solar neutrinos using John N. Bahcall’s theoretical model and working with William A. Fowler, Maurice Goldhaber, and numerous engineers and crew members on the 4850 Level of the Homestake Mine—now the Davis Campus at the Sanford Underground Research Facility. The result of Davis’s observations, just one third the theoretical expected flux, led to fundamental advances in particle physics and astrophysics. For his work, Davis received a share of the 2002 Nobel Prize in Physics, along with Masatoshi Koshiba for his research into the detection of cosmic neutrinos.

In December 1972, a group of friends, colleagues, and former students gathered at Fisk University in Nashville, Tennessee to honor three prominent Black physicists: Halson Eagleson, Donald Edwards, and John Hunter. Subsequent events, which also included scientific lectures and seminars, were held at Howard University in May 1975 and Morehouse College in April 1976.

Organizers soon realized there was a need for a formal structure and selected Morgan State University as the site because of its large physics department and its proximity to other Historically Black Colleges and Universities and national research facilities, according to Mickens. The Society of Black Physicists was inaugurated there on April 28, 1977, and later renamed the National Society of Black Physicists (NSBP). It is the largest and most recognizable organization devoted to African-American physicists.

“The work of the NSBP has been pioneering and essential, but much remains to be done by all of us and the entire scientific community to significantly raise the number of African-American participants in science, and in physics in particular,’ said, Kormos-Buchwald.

On April 28, 1977, Morgan State University became the birthplace of the National Society of Black Physicists (NSBP). Its founders sought to promote the professional well-being of African American physicists within society at large and within the international scientific community. They have successfully mentored young Black students to increase their representation in physics and technology. Their persistent professional devotion to inclusion has produced the largest national organization that actively supports African American physicists.

The Sanford Underground Research Facility is operated by the South Dakota Science and Technology Authority (SDSTA) with funding from the Department of Energy. Our mission is to advance world-class science and inspire learning across generations. Visit Sanford Lab at www.SanfordLab.org.

The American Physical Society (www.aps.org) is a nonprofit membership organization working to advance and diffuse the knowledge of physics through its outstanding research journals, scientific meetings, and education, outreach, advocacy and international activities.