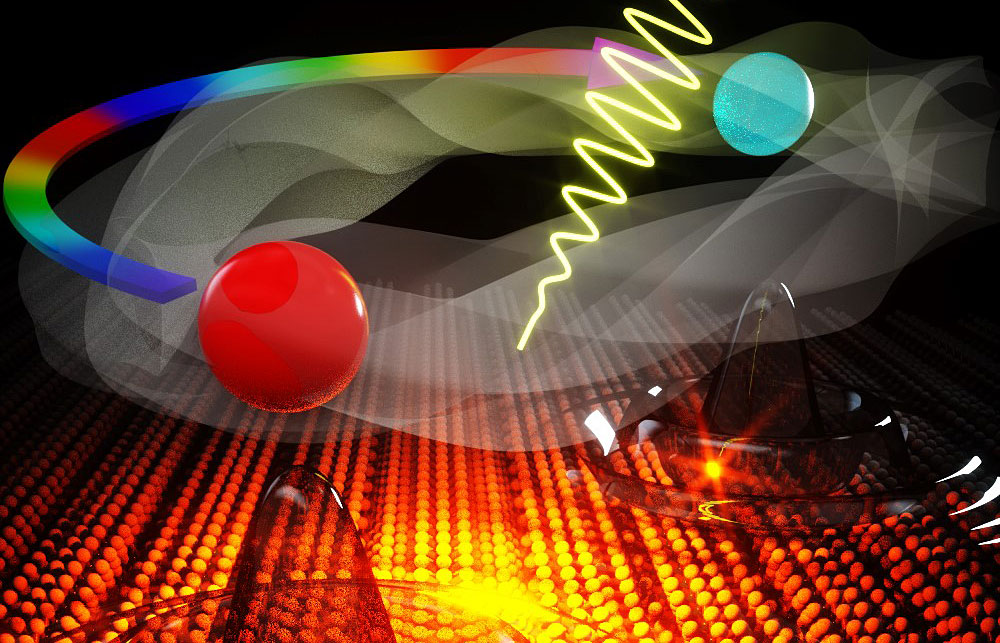 Collaborating scientists at the U.S. Department of Energy's Ames Laboratory, Brookhaven Laboratory and the University of Alabama Birmingham used laser pulses to twist the crystal lattice of a Weyl semimetal, switching on a giant electron current that appears to be nearly dissipationless. The discovery and control of such properties brings these materials another step closer to use in applications such as quantum computing.

Scientists at the U.S. Department of Energy’s Ames Laboratory and collaborators at Brookhaven National Laboratory and the University of Alabama at Birmingham have discovered a new light-induced switch that twists the crystal lattice of the material, switching on a giant electron current that appears to be nearly dissipationless. The discovery was made in a category of topological materials that holds great promise for spintronics, topological effect transistors, and quantum computing.

Weyl and Dirac semimetals can host exotic, nearly dissipationless, electron conduction properties that take advantage of the unique state in the crystal lattice and electronic structure of the material that protects the electrons from doing so. These anomalous electron transport channels, protected by symmetry and topology, don’t normally occur in conventional metals such as copper. After decades of being described only in the context of theoretical physics, there is growing interest in fabricating, exploring, refining, and controlling their topologically protected electronic properties for device applications. For example, wide-scale adoption of quantum computing requires building devices in which fragile quantum states are protected from impurities and noisy environments. One approach to achieve this is through the development of topological quantum computation, in which qubits are based on “symmetry-protected” dissipationless electric currents that are immune to noise.

“Light-induced lattice twisting, or a phononic switch, can control the crystal inversion symmetry and photogenerate giant electric current with very small resistance,” said Jigang Wang, senior scientist at Ames Laboratory and professor of physics at Iowa State University. “This new control principle does not require static electric or magnetic fields, and has much faster speeds and lower energy cost.”

“This finding could be extended to a new quantum computing principle based on the chiral physics and dissipationless energy transport, which may run much faster speeds, lower energy cost and high operation temperature.” said Liang Luo, a scientist at Ames Laboratory and first author of the paper.

Wang, Luo, and their colleagues accomplished just that, using terahertz (one trillion cycles per second) laser light spectroscopy to examine and nudge these materials into revealing the symmetry switching mechanisms of their properties.

In this experiment, the team altered the symmetry of the electronic structure of the material, using laser pulses to twist the lattice arrangement of the crystal. This light switch enables “Weyl points” in the material, causing electrons to behave as massless particles that can carry the protected, low dissipation current that is sought after.

“We achieved this giant dissipationless current by driving periodic motions of atoms around their equilibrium position in order to break crystal inversion symmetry,” says Ilias Perakis, professor of physics and chair at the University of Alabama at Birmingham. “This light-induced Weyl semimetal transport and topology control principle appears to be universal and will be very useful in the development of future quantum computing and electronics with high speed and low energy consumption.”

“What we’ve lacked until now is a low energy and fast switch to induce and control symmetry of these materials,” said Qiang Li, Group leader of the Brookhaven National Laboratory’s Advanced Energy Materials Group. “Our discovery of a light symmetry switch opens a fascinating opportunity to carry dissipationless electron current, a topologically protected state that doesn’t weaken or slow down when it bumps into imperfections and impurities in the material.”

Terahertz photocurrent and laser spectroscopy experiments and model building were performed at Ames Laboratory. Sample development and magneto-transport measurements were conducted by Brookhaven National Laboratory. Data analysis was conducted by the University of Alabama at Birmingham. First-principles calculations and topological analysis were conducted by the Center for the Advancement of Topological Semimetals, an Energy Frontier Research Center funded by the DOE Office of Science.

Ames Laboratory is supported by the Office of Science of the U.S. Department of Energy. The Office of Science is the single largest supporter of basic research in the physical sciences in the United States, and is working to address some of the most pressing challenges of our time. For more information, please visit https://energy.gov/science.