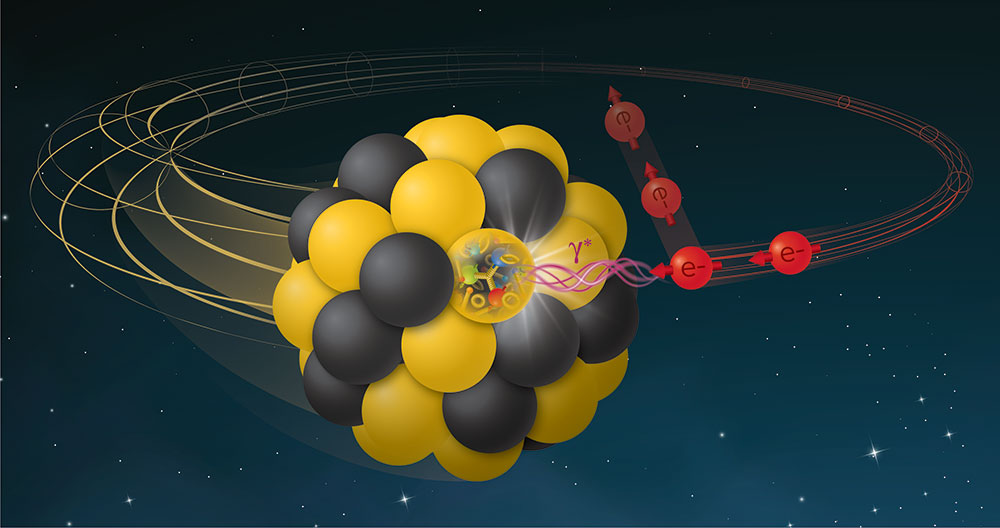 UPTON, NY and NEWPORT NEWS, VA — The U.S. Department of Energy (DOE) has granted Critical Decision 1 (CD-1) for the Electron-Ion Collider (EIC), a one-of-a-kind nuclear physics research facility to be built at DOE's Brookhaven National Laboratory on Long Island. Following DOE's approval of "mission need" (known as CD-0) in December 2019, this announcement marks the completion of the project's definition phase and its conceptual design. Approval of CD-1 provides the authorization to begin the project execution phase, starting with preliminary design.

“The successful completion of this important milestone recognizes the hard work of many under challenging circumstances. It also signals the EIC project is ready to turn attention to establishing a performance baseline to guide EIC construction,” said Kathleen Hogan, DOE Acting Under Secretary for Science and Energy. “We are pleased the joint EIC teams at Brookhaven National Laboratory and Thomas Jefferson National Accelerator Facility are making sustained steady progress given the importance of the EIC to DOE’s mission and the future of the DOE Nuclear Physics program.”

The EIC is being funded by the federal government, primarily through the DOE Office of Science. It will draw on expertise throughout the DOE national laboratory complex and from universities and research institutions worldwide. The total project cost is expected to range from $1.7-2.8 billion.

“We are excited to enter the next stage of translating the plans for the Electron-Ion Collider into a state-of-the-art research facility that will open a new frontier in nuclear physics,” said Brookhaven Lab Director Doon Gibbs.

Thomas Jefferson National Accelerator Facility (Jefferson Lab) in Newport News, Virginia, is a major partner in the project and will continue to make significant contributions.

“Jefferson Lab is proud to continue its partnership with Brookhaven Lab, as we work together to build this next-generation research facility,” said Jefferson Lab Director Stuart Henderson. “We at Jefferson Lab are eager to move forward on realizing the EIC. This machine will not only enable a new era of scientific discovery with its unprecedented reach inside matter but also will complement and extend the precision research continuing at our own Continuous Electron Beam Accelerator Facility.” 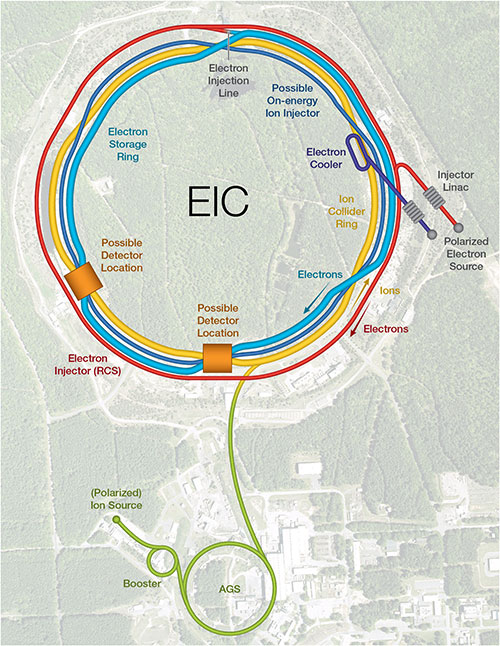 The EIC will be a 2.4-mile-circumference particle collider, the first of its kind in the world. It will steer beams of high-energy polarized electrons into collisions with polarized protons and atomic nuclei to produce precision 3-D snapshots of those particles’ internal structures. Experiments at the EIC will help scientists unlock the secrets of the strongest force in nature and explore how tiny particles called quarks and gluons build up the mass, spin, and other properties of all visible matter.

The world-leading science that an EIC will enable and the technological innovations needed to make it a reality have the potential to power the technologies of tomorrow. The benefits will extend beyond physics to advance health and medicine, national security, nuclear energy, radioisotope production, and industrial uses of particle beams.

New York State has made a substantial commitment to the project. About $100 million in NY State funding will support the construction of new infrastructure at Brookhaven Lab, including buildings and roads essential for the EIC.

"New York State is proud to partner with the federal government and Brookhaven Lab to site the world’s first polarized electron-ion collider, and the first new collider built in the United States in decades, here on Long Island,” said Empire State Development Acting Commissioner and President & CEO-Designate Eric Gertler. “This project ensures that Brookhaven Lab and New York State remain a leader in the field of scientific discovery, while creating thousands of jobs and generating billions of dollars in new economic activity.”

The design for the EIC includes building a new electron storage ring and electron accelerator components that will operate seamlessly with existing infrastructure currently providing beams for the Relativistic Heavy Ion Collider (RHIC) at Brookhaven Lab. RHIC, a DOE Office of Science user facility, has been serving nuclear physicists since it began operations in 2000.

The new electron ring will allow polarized electrons to interact with polarized protons and large nuclei to precisely probe and produce dynamic snapshots of the building blocks of these nuclear particles—somewhat like a CT scanner for atoms. Scientists will use data collected from millions of collisions to study the “strong nuclear force”—the strongest force in nature—and to answer other longstanding questions in physics, including where the proton gets its “spin” and how it gets its mass.

Building the EIC will maintain U.S. leadership in nuclear physics and accelerator science—fields that are crucial to our technological, economic, and national security. The project will also provide educational and workforce development opportunities to train the next generation of experts in these fields.

In addition, the technological advances already under development to make the EIC a reality—innovative accelerator and particle-tracking components and data-management tools and techniques—could have widespread impacts. These include new approaches to cancer therapy, solving other “big data” challenges, and improving accelerator facilities for testing batteries, catalysts, and other energy-related materials.

The knowledge stemming from research at the EIC will be published in the open scientific research literature and will be available to all partners, including commercial partners.

The collider-accelerator infrastructure that powers the EIC at Brookhaven will also be available to researchers who use particle beams to produce and conduct studies on medical isotopes and to study the effects of simulated space radiation with the aim of protecting future astronauts.

The EIC will be an international facility, attracting expertise from around the world. The growing EIC User Group already includes 251 member institutions from 33 countries—with 88 U.S. institutions representing 27 states, Puerto Rico, and Washington, D.C.

“The EIC project profits enormously from a diverse set of experiences in accelerator science, detector technology, and theory at numerous institutions worldwide, providing a critical basis for a broad EIC scientific program and offering outstanding educational opportunities for multiple generations of students and postdocs worldwide,” said Bernd Surrow, professor at Temple University and chair of the EIC Users group.

Construction of the EIC is expected to begin in 2024, with the facility beginning operations early in the next decade.

Brookhaven Lab and Jefferson Lab are supported by the U.S. Department of Energy’s Office of Science. The Office of Science is the single largest supporter of basic research in the physical sciences in the United States and is working to address some of the most pressing challenges of our time. For more information, visit https://www.energy.gov/science.