TRACER scientists participated in an online media briefing on September 27, 2021, to talk about their research plans and answer questions about the campaign. View the recorded webinar.

To find out, researchers will study the effects of aerosols on storms in Houston 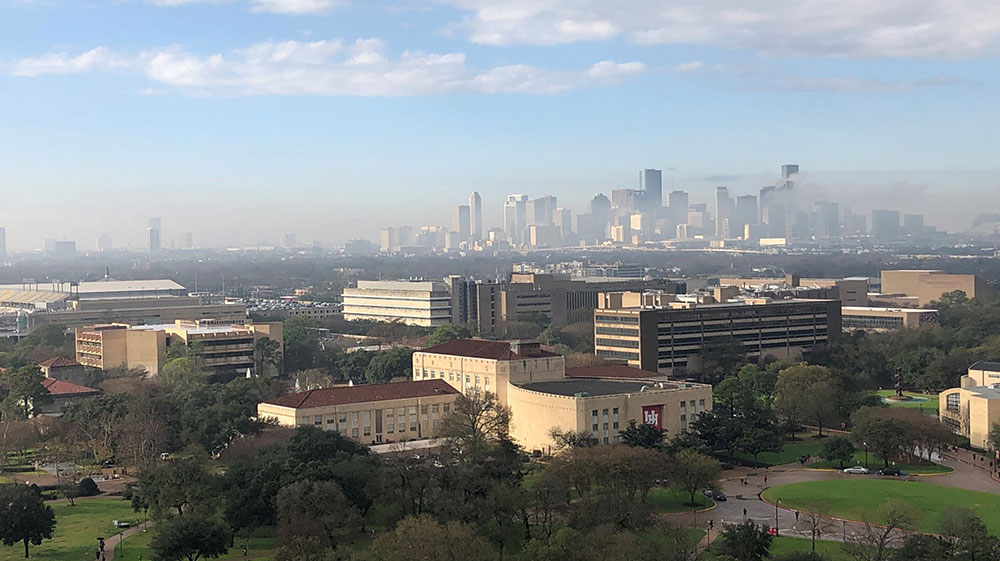 The 2021–2022 TRacking Aerosol Convection interactions ExpeRiment (TRACER) aims to collect data on the evolution of convective clouds and the environment at locations around Houston, Texas. Scientists from Brookhaven National Laboratory are collaborating with the University of Houston (foreground) and other partners using instrumentation from the U.S. Department of Energy's Atmospheric Radiation Measurement (ARM) user facility. (Courtesy of ARM)

HOUSTON, TX – A team of atmospheric scientists from around the nation is descending on the Houston, Texas, area for the next 14 months to seek answers to a vexing question: Do tiny specks of soot, dust, smoke, and other particles suspended in Earth’s atmosphere help determine the severity of thunderstorms? The knowledge gained may make weather forecasts more accurate and provide crucial data for improving predictions about how aerosols may affect Earth’s future climate.

The Houston deployment will also provide detailed data on local air quality.  As an extensive field study in a metropolitan area, it will give scientists a unique opportunity to explore the effects of industry, vehicle emissions, and the built environment on weather and climate.

“We want to know how aerosols, the tiny particles that water condenses onto to form cloud droplets, influence the physics of deep convective clouds—the kind that often pack lightning and pour rain—and then how those same weather conditions affect the local aerosol characteristics and urban air quality,” said Michael Jensen, a meteorologist at the U.S. Department of Energy’s (DOE) Brookhaven National Laboratory and principal investigator for the TRACER field campaign. TRACER is short for TRacking Aerosol Convection interactions ExpeRiment, a study being carried out by DOE’s Atmospheric Radiation Measurement (ARM) user facility. 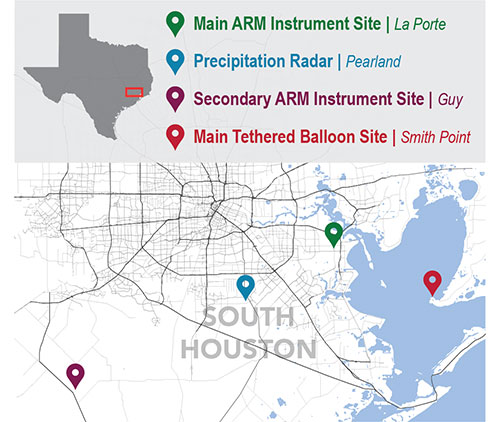 Working in close collaboration with researchers at the University of Houston, TRACER scientists from Brookhaven, Los Alamos National Laboratory, and other institutions will collect data on aerosols and atmospheric characteristics for a full year. The team will deploy a suite of instruments supplied and operated by ARM at four locations just outside the city. During an intensive study period from June through September 2022, additional partners from the National Science Foundation, NASA, the Texas Commission on Environmental Quality, and other agencies will join the team to catch the peak of Houston’s summer storm season.

With a humid subtropical climate, numerous isolated convective storms, and a range of industrial and natural aerosol sources, Houston is the perfect place for the study.

“We’re a coastal environment, so it’s particularly challenging to forecast the weather,” said James Flynn, research associate professor in the University of Houston Department of Earth and Atmospheric Sciences in the College of Natural Sciences and Mathematics. “We have a lot of thunderstorms; we have pollution and some natural sources of fine particles.”

Examples include dust, sea salt, particles emitted by diesel engines, soot from combustion processes at power plants and refineries, lots of urban road traffic, and even smoke from wildfires in California and Colorado.

Some research suggests that such aerosols can change the lifecycle of clouds, delaying the onset of precipitation. If that happens, as clouds grow, water droplets may get bigger. “And when they do fall, it’s a gully washer,” Flynn said.

TRACER data will improve understanding of these processes—and our ability to predict when the deluges will occur. 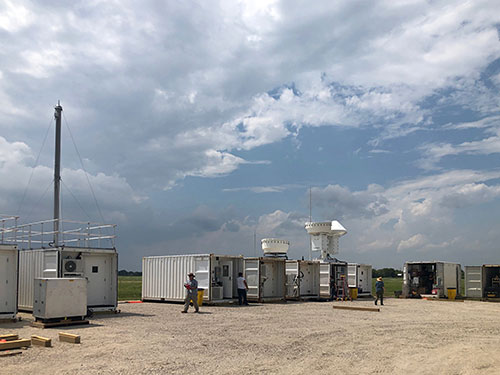 ARM team members set up the ARM Mobile Facility—a series of containers outfitted with sophisticated atmospheric and meteorological sampling equipment—at the La Porte (Texas) Municipal Airport. Equipment at this main site for the TRACER campaign will operate from October 1, 2021, through September 30, 2022. (Courtesy of ARM)

The ARM instruments, housed in 10 mobile shipping containers, are collectively known as “the first ARM Mobile Facility,” or AMF1. Many of these instruments, including an Aerosol Observing System outfitted at Brookhaven Lab, have traveled to locations around the world from the Arctic to the tropics to collect atmospheric data.

“This is the first deployment of the ARM Mobile Facility in an urban coastal environment,” said Sally McFarlane, DOE program manager for ARM. “The warm, moist air from the Gulf of Mexico helps drive the formation of a lot of isolated, moderately strong storms—the ones that are probably ripe to be impacted by aerosols. Those coastal conditions and Houston’s mix of industrial and natural aerosol sources make the area an ideal laboratory for studying aerosol-cloud interactions.”

An ARM team will set up the containers, each housing racks of instruments and intake vents, near Galveston Bay—an area with lots of industry, refineries, and transportation. Several of the containers also host sophisticated radars (which use radio waves) and lidars (which use laser light pulses) to measure the height, depth, and amount of water in clouds—among other important variables. Additional meteorological instruments will operate in an adjacent instrument field. Collectively these tools will track cloud properties; the size, number, and chemical composition of aerosols; precipitation; and variables such as temperature and humidity that affect atmospheric stability. 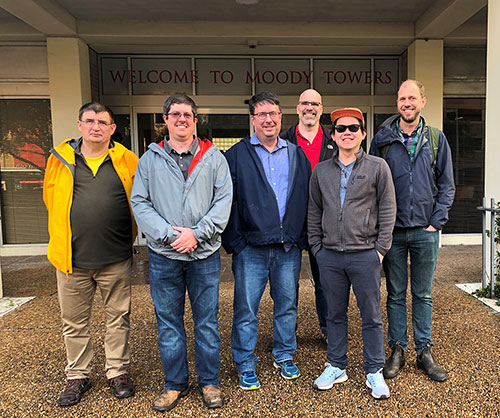 Sampling throughout the atmosphere

Over the course of the year, the ARM team will also launch more than a thousand weather balloons carrying additional battery-powered sensors, called radiosondes, aloft. The balloons will travel through and above the clouds, to an altitude up to 17 kilometers (nearly 56,000 feet)—often making it to the stratosphere—sending additional data on temperature, humidity, pressure, and winds back to the research station below.

Some balloon-borne instruments will also measure the concentration of ozone through the depth of the atmosphere.

“We’ll use these ozone measurements to learn about air quality and how thunderstorms redistribute air between the surface and aloft,” Flynn said. Surface ozone is generated when chemicals emitted as part of automobile exhaust and industrial processes react with sunlight. So, when storms transport air from the surface upward through the atmosphere, the pollutant can serve as a tracer for TRACER.

During the intensive study period next summer, scientists from TRACER and partner agencies will also deploy additional equipment near the town of Guy, Texas, southwest of the city. Two tethered balloon systems, one at the site in Guy and one at Smith Point on the east side of Galveston Bay, will carry instruments to measure winds, small aerosol particles, and ozone in the lowest layers of the atmosphere. The measurements on the shore of Galveston Bay will provide important information about how the bay influences the local atmospheric circulation.

Meanwhile, the instruments in Guy will collect data in a more rural location.

“We expect to see lower aerosol concentrations, so this site will serve as a contrast to the AMF1 site and allow comparison of the cloud and precipitation characteristics under these very different conditions,” McFarlane said.

Between the two main land sites, a scanning ARM precipitation radar in Pearland will track the properties of clouds.

“This radar will collect data on cloud properties, including the velocity of vertical updrafts that affect how fast clouds grow, form ice, and produce rain and lightning. It will operate during the entire study period,” Jensen said.

The radar will be driven by software developed by Brookhaven scientist Pavlos Kollias and programmed using artificial intelligence (AI) and existing data sets. “This software allows the radar to select the storms we think are going to develop and move over the sites, and then zoom in and scan at high resolution to explore details of how aerosols are impacting the precipitation drops in there,” Jensen said.

Left: At the TRACER site in Pearland, Texas, a crane holds the panels that will protect the antenna of a C-Band Scanning ARM Precipitation Radar. Right: The completed installation from a similar deployment in Argentina, 2018-19. (Photos courtesy of ARM)

All data collected by ARM will be freely available to anyone who wants to analyze it.

“We hope the things we learn here, the processes within convective activity, how pollution impacts storms, will be applicable in other major urban areas that have a lot of convection,” Flynn said. “With a lot of projects, you’re really getting down to some real core science. People sometimes aren’t sure why it matters. This is one of those projects that is very applicable to everyday life here in Houston.”

The research will be applicable beyond the Houston area as well. DOE’s Atmospheric System Research (ASR) program has already committed to fund 10 TRACER projects led by university-based researchers.

“TRACER’s scientific objectives are aligned with ASR’s focus on cloud, aerosol, precipitation, and radiation processes,” said Jeff Stehr, a DOE program manager for ASR. “Convective clouds occur all around the world, but there are still many questions about how they are affected by their environment. TRACER will improve our understanding of how these clouds form, grow, and decay in and around a coastal urban environment. The initial set of ASR-funded projects involve research teams from around the country, and will add measurements as well as modeling to the TRACER campaign.”

Data collected by TRACER will also be helpful for understanding processes relevant to how hurricanes form and how long they last.

And while weather and climate operate on different timescales, they’re both about “the physics of Earth’s atmosphere,” Jensen said. “Understanding storms is important for understanding climate because storms redistribute heat and moisture through the atmosphere. And that redistribution is affected by small-scale processes in the atmosphere including interactions with aerosols. That’s what we struggle with in the models of climate and weather.”

“TRACER will fill in some of the missing data to help us improve those models.”

TRACER is funded by DOE’s Office of Science.

The University of Houston is a Carnegie-designated Tier One public research university recognized with a Phi Beta Kappa chapter for excellence in undergraduate education. UH serves the globally competitive Houston and Gulf Coast Region by providing world-class faculty, experiential learning and strategic industry partnerships. Located in the nation's fourth-largest city and one of the most ethnically and culturally diverse regions in the country, UH is a federally designated Hispanic- and Asian-American-Serving institution with enrollment of more than 47,000 students.