Recognition for contributions in the field of catalysis throughout his career 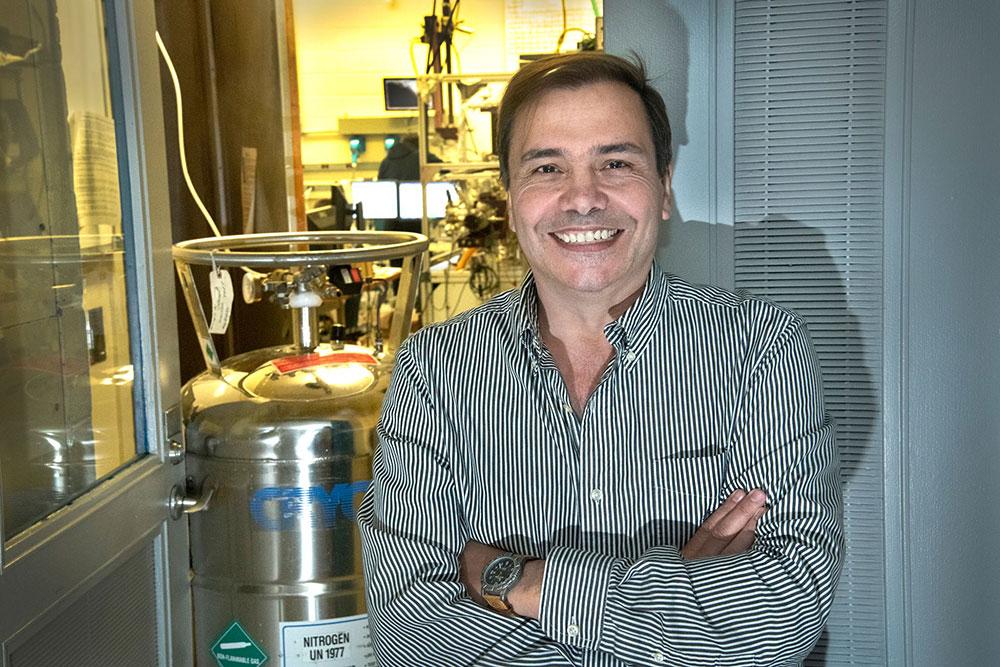 UPTON, NY—José Rodriguez, a chemist at the U.S. Department of Energy’s Brookhaven National Laboratory and an adjunct professor in the departments of Chemistry and Materials Science and Chemical Engineering at Stony Brook University, has been named a 2021 Fellow of the American Vacuum Society (AVS). The award recognizes AVS members who have made sustained and outstanding technical contributions throughout their careers in areas of interest to the society.

This honor recognizes Rodriguez for his contributions in the field of catalysis.

Catalysis is the study and design of chemical substances that facilitate molecular interactions during chemical reactions. Catalysts help bring reacting molecules together and often lower the energy required to break and reform chemical bonds. They generally speed up reactions, making them more efficient.

Studying catalytic materials and processes under vacuum conditions—that is, in the absence of other materials or molecules—is important for assessing and improving their performance.

Specifically, AVS cites Rodriguez for his “seminal contributions to the understanding of reactions associated with desulfurization and C1 chemistry on surfaces of metals, oxides, carbides, and sulfides.” These reactions are important for producing clean, efficient, renewable fuels and for controlling environmental pollution.

“This is a great honor for me,” Rodriguez said. “Since the early age of space exploration in the 1960s, when it became possible to study surface reactions under vacuum or ultrahigh vacuum conditions, characterization techniques have evolved and now we have powerful tools that can help us to design better catalysts.”

Early in his career, Rodriguez pursued a highly productive research program in hydrodesulfurization catalysis. He developed a process for removing sulfur from petroleum feedstocks to control pollution and produce cleaner fuels. His more recent work focuses on “C1 chemistry.” These reactions involve molecules with just one carbon (C) atom. They include hydrogenating carbon monoxide (CO) and carbon dioxide (CO2), and converting methane (CH4) to methanol (CH3OH) or hydrogen. One goal of these reactions is to transform potent greenhouse gases into fuels and other useful chemicals.

Over his 30-year career at Brookhaven, Rodriguez has developed extensive expertise and served as a mentor and collaborator. He’s hosted undergraduate and graduate students, postdoctoral fellows, and visiting scientists from other national laboratories and universities. He’s help guide the design of experimental tools and techniques for “in situ” studies—experiments that track catalytic reactions as they happen. He is also an expert in using theoretical approaches that turn experimental data into molecular models, and in using theory and modeling to uncover precise reaction mechanisms. Through this interplay of experiment and theory, Rodriguez and his collaborators have identified reaction bottlenecks and barriers—and ways to rationally tweak the design of catalysts to improve their performance.

“This honor is wonderful recognition of the broad impact of José’s work,” said Alex Harris, director of the Energy Sciences Department and acting chair of the Chemistry Division at Brookhaven Lab. “He has exhibited leadership in applying advanced methods—particularly synchrotron x-ray techniques at light sources such as Brookhaven Lab’s National Synchrotron Light Source II (NSLS-II)—to peer into reaction processes, and in using insights gained from those experiments to develop better catalysts.”

Born and raised in Venezuela, Rodriguez earned undergraduate degrees in chemistry and chemical engineering from the Simon Bolivar University in Caracas (1981, 1982), and a Ph.D. in physical chemistry from Indiana University (1988). After pursuing postdoctoral studies in chemistry at Texas A&M University, he joined Brookhaven Lab in 1991. He currently leads the Catalysis: Reactivity and Structure Group within the Chemistry Division and co-leads the Synchrotron Catalysis Consortium that operates at NSLS-II. He was named a DOE Office of Science Distinguished Scientist Fellow in 2019, received Brookhaven Lab’s Science and Technology Award in 2011, and a 2007 Award for Technical Achievements from Great Minds in STEM™—a non-profit organization that focuses on educational awareness and recognition programs for Hispanics in Science, Technology, Engineering and Mathematics (STEM).