The following news story was posted by the National Oceanic and Atmospheric Administration (NOAA). It describes an opinion piece appearing in the Proceedings of the National Academy of Sciences (PNAS) that outlines a framework for assessing and guiding research on “marine cloud brightening” — a proposed method to reflect sunlight away from Earth to mitigate the most severe impacts of climate change. Allison McComiskey, Chair of the Environmental and Climate Sciences Department at the U.S. Department of Energy’s Brookhaven National Laboratory, is one of the co-authors of the PNAS article. For more information on Brookhaven Lab’s role in this work, contact Karen McNulty Walsh, kmcnulty@bnl.gov, 631-344-8350. 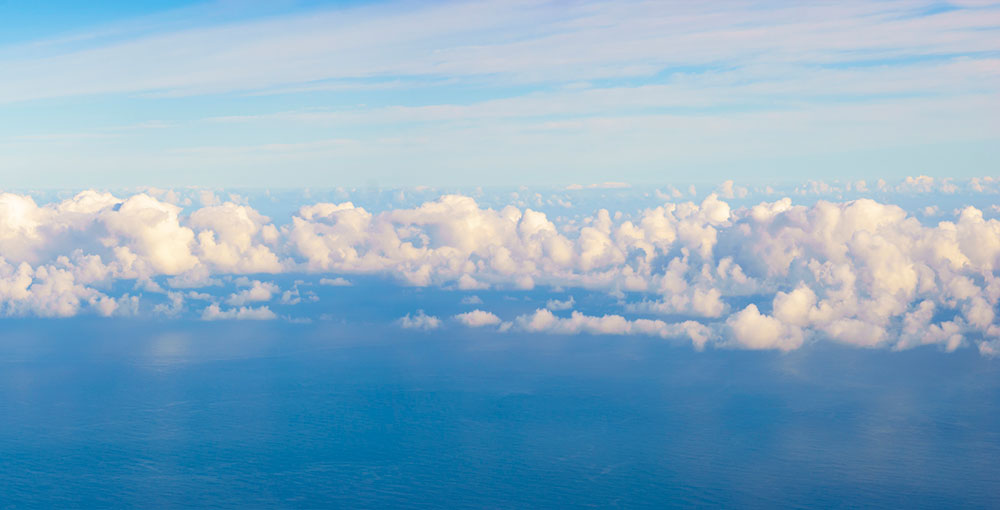 Research into engineering techniques that might one day be employed to artificially cool the planet poses some of the thorniest questions facing society today. For climate scientists, that tension is compounded by the lack of a broadly accepted oversight framework to guide their research.

In an opinion article published in PNAS, a team of scientists led by NOAA and CIRES researchers outline a framework for assessing the viability of a method for reflecting sunlight called marine cloud brightening, or MCB. The proposed method would use ocean sea-salt particles to increase the reflectivity of low-lying clouds over certain ocean regions. This is one of a number of proposed methods under consideration as a temporary measure to limit rampant warming.

Climate scientists agree that the most important steps that can be taken to avoid the worst impacts of climate change are to decarbonize the economy and preserve and restore natural ecosystems that absorb carbon, said lead author Michael Diamond, a CIRES scientist working at NOAA.

Unfortunately, current pledges to cut global greenhouse gas emissions are insufficient to limit warming to 1.5 degrees C (or 2.7 degrees F). As global climate impacts grow in severity, the interest in climate intervention research is expected to increase. A 2021 report issued by the National Academies of Science, Engineering and Medicine recommended conducting research in climate intervention methods and, further, said such research should operate under “robust research governance” to objectively assess its value and risks — governance that does not yet exist.

“MCB is now being evaluated as a potentially viable option, and therefore it is incumbent on us to coordinate across the many contributing institutions and create the structure for a future research program,” said NOAA scientist Graham Feingold. 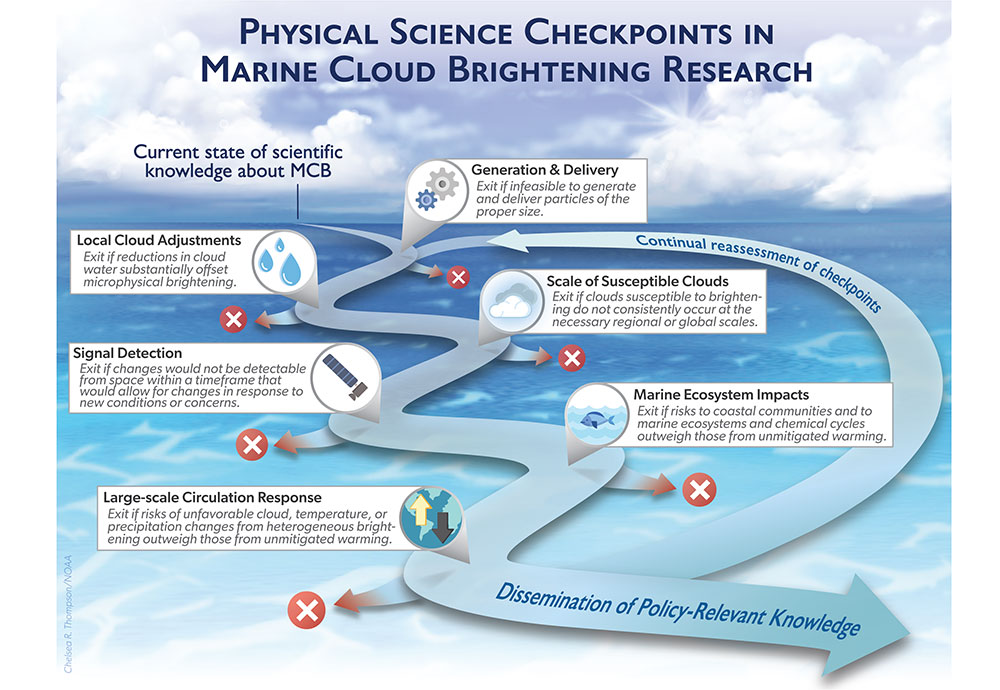 This graphic describes checkpoints and off ramps to guide research on marine cloud brightening as a proposed strategy for mitigating the impacts of climate change. Credit: NOAA

Led by Diamond and Feingold, a team that includes researchers from NCAR, NASA’s Jet Propulsion Laboratory, the Brookhaven National Laboratory, Scripps Institution of Oceanography, and the University of Washington lays out ideas for such a framework. They propose a list of six “checkpoints” that should be continuously assessed during research into marine cloud brightening.

If at any point, a research effort demonstrates that a single aspect of MCB would be technically infeasible or socially unacceptable, the project would be shunted onto an “exit ramp” leading to redirection or termination of the work.

Among the physical science checkpoints the scientists identified, researchers would need to develop sufficient confidence that appropriately-sized particles can be generated and delivered to the right altitude and once there, act to form cloud droplets that scatter sunlight efficiently. They would also need to show that MCB activities would not trigger cloud responses that substantially offset the brightening effect.

Scientists would further need to establish that marine clouds that can be brightened occur frequently enough to reduce the global impact of climate change and show that the cooling effect of MCB would be measurable in order to demonstrate that the method is working as intended.

Finally, MCB research would need to clarify the risks of negative impacts on coastal communities and ecosystems and large-scale disruption of atmospheric circulations with unintended consequences, such as affecting precipitation patterns in vulnerable regions like the Amazon.

Beyond addressing science gaps, an equitable governance structure would incorporate input from experts in fields outside the physical sciences, such as ethics, sociology, and ecology in decisions about research feasibility and funding. For example, if researchers reached a point where there was scientific confidence in the predictability of MCB-influenced precipitation changes, a decision about whether research continues would consider how ecological and societal impacts affect different communities or regions.

"Policymakers and potentially affected communities need a seat at the table to ensure that the information scientists generate is usable and relevant to their needs," said Diamond. Although their paper focuses on MCB, the scientists advocate for a similar research framework to assess the viability of other climate intervention proposals, such as stratospheric aerosol injection, which would cool the planet by spreading millions of tons of light-reflecting particles in the stratosphere, where Earth’s protective ozone layer is found.

“While in an ideal world, the global community would quickly develop formal governance structures to oversee research and direct funding, the research community needs to establish guidelines for itself now,” said Diamond.

The research was supported by NOAA’s Earth’s Radiation Budget initiative, CIRES, the National Science Foundation, NASA, and the Department of Energy.