New Radiotracers on the Horizon 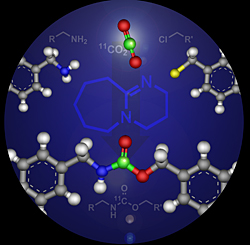 The radiotracer chemistry group at Brookhaven National Laboratory has developed a method to directly label carbamate-containing compounds with [11C]-carbon dioxide. The new method provides a simple and accessible route to labeling compounds important in many areas of biology and will have an immediate enabling impact on the synthesis of radiotracers for applications in energy, health, and environmental research. The new approach, just published in Angewandte Chemie, is based on direct CO2 fixation mediated by a nitrogen-containing organic base (DBU), which serves a dual role as a catalyst. Synthesis with carbon-11 must be incredibly fast due to its 20-minute half life. In this new method, the entire labeling process is accomplished in under 10 minutes and does not require new equipment or exotic reagents.