A New Ultrafast Camera for Use Across the Sciences

TimepixCam pulls together diverse technologies to capture ions and photons for biology, chemistry and more 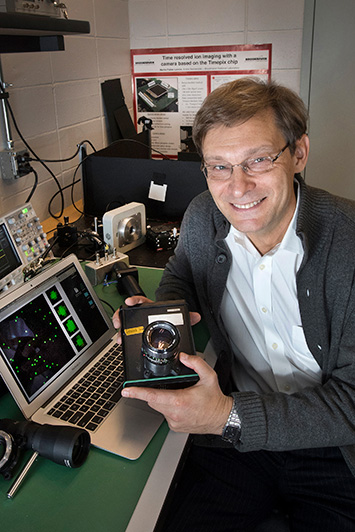 Andrei Nomerotski joined the U.S. Department of Energy’s Brookhaven National Laboratory to build a three-gigapixel camera for the Large Synoptic Survey Telescope (LSST), a massive instrument that will be installed in the mountains of Chile to capture the deepest and widest snapshots of the cosmos to date. The LSST is Nomerotski’s main focus, yet he manages to find time to run a side project at Brookhaven: developing an ultrafast camera, called TimepixCam, that can detect either single photons or ions for more down-to-earth studies in fields from biology to quantum computing.

“To our knowledge, these are the first experiments that involve imaging single photons with simultaneous time stamping at the pixel level with 10 nanosecond time resolution,” Nomerotski said in a recent paper illustrating TimepixCam’s capabilities.

The idea for the superfast shooter sprouted when Nomerotski was working at Oxford University, developing a camera for chemists that could image and timestamp the flying molecular fragments produced in mass spectrometry, a common chemical-identification technique used in laboratories.

“When I came to Brookhaven I figured out how to make this type of camera in a much simpler way,” Nomerotski said.

His latest rendition has a modest 256 by 256 pixel array, but its speed sets it apart, running roughly 4 million times faster than an iPhone shooting slow-motion video.

Putting the pieces together

Part of the key to this incredible speed is the camera’s silicon sensor, which Nomerotski designed himself. It has a very thin surface conductive layer and an antireflective coating that allows it to absorb every possible speck of light and efficiently convert incoming photons into readable signals.

“The optical characteristics of image sensors we make for the LSST camera are similar to those of the silicon sensors we use in TimepixCam. I used my new expertise in optical sensors and astronomy to come up with a new sensor that we can attach to an existing readout chip,” he explained.

The rest of the camera’s parts are an amalgamation of pre-existing technology from scattered fields of science. The sensors are manufactured at a foundry in Barcelona. But the eponymous Timepix readout chip, bonded underneath the sensor in each camera, hails from the European Center for Nuclear Research (CERN) laboratory in Geneva.

“There are a lot of similarities between this readout chip-silicon sensor combination and the pixel detectors in ATLAS and CMS, two detectors for large particle physics experiments at CERN’s Large Hadron Collider,” said Nomerotski. “The camera’s electronics are made by yet another company that develops detectors for x-ray imaging,” he added.

After buying lenses on eBay and creating a casing using a 3D printer, Nomerotski’s team assembles the various parts and tests each TimepixCam in their lab at Brookhaven. So far the group has made three cameras.

A myriad of uses

When the cameras are ready, the group collaborates with other scientists who want to use TimepixCam in their own experiments. Michael White’s group in Brookhaven’s chemistry department and Thomas Weinacht’s group at Stony Brook University already use the camera for innovations in imaging mass spectrometry, the same chemistry technique Nomerotski was working on at Oxford.

“For a while I was only thinking of applications in chemical imaging,” said Nomerotski, “but then I read a couple of papers that guided me in a new direction. It occurred to me that by placing an image intensifier in front of the camera it could be used to image single photons. That opens a completely different domain of applications.”

A single photon is too faint for the camera to see on its own. So the intensifier takes incoming photons and passes them through a series of materials that turn each particle of light into a brighter flash. As the camera picks up this flash, it also records the time.

“The intensifier is like a pair of very fast night vision goggles,” Nomerotski explained.

With this addition, TimepixCam can act as a fluorescent imaging tool, as Nomerotski demonstrated in a recent paper. These sorts of tools can, for example, help biologists look at oxygen concentrations in living cells to track metabolic processes, or help characterize new materials such as the light-harvesting layers used in solar cells.

In addition, because single photons can be used as ‘qubits,’ the quantum version of the binary bits that carry information in today’s computers, Nomerotski also thinks TimepixCam could play a role in quantum computing and advances in cryptography. He is testing this with collaborator Eden Figueroa of Stony Brook University.

Figueroa, who specializes in quantum information technology, wants to use TimepixCam in imaging experiments using “entangled photons.” Entangled photons are not, as it might seem, physically wrapped around one another. They are simply aware of each other, a peculiar quantum phenomenon in which any measurement of one photon immediately affects the other, even over long distances. Thus when either photon is measured, information about that measurement is “teleported” from one photon to the other. Researchers like Figueroa can create entangled photons in laboratories and send them along regular fiber optic cables.

“Entangled photons are created simultaneously, so checking that they have the same timestamp is a powerful tool to distinguish the pair from the background photons,” Nomerotski said. “TimepixCam can also be used to measure the spatial distribution of photons and to keep track of the actions of entanglement sources and quantum memories in real time."

Quantum encryption uses entangled photons as encryption keys—ciphers that computers send each other explaining how to encode and decode private information. Quantum encryption keys have an extra layer of protection that doesn’t exist in the ordinary digital world. The funny rules of quantum mechanics dictate that if anyone—or any computer—intercepts and reads the key while it’s in transit, that action will unavoidably alter the signal, alerting the sender and receiver that their secret code has been compromised.

As with all projects, there is always room to go further. Nomerotski hopes to shave the device’s time resolution down to one nanosecond—20 million times faster than a single beat of a hummingbird’s wings.

“We just tested the next generation of this camera based on the latest Timepix readout chip, which has better timing resolution, and there are also other things to improve. My colleagues in Oxford just developed a faster part for the intensifier and we may test that soon,” Nomerotski said.

Someday the goal will be to make these cameras yet another thousand times faster, which could open doors to even more applications—including a return to the types of particle physics experiments that originally inspired the Timepix readout chips. After all, when you collide particles at nearly the speed of light, you need top-notch time resolution to track the subatomic pieces that fly out.

“The camera has gotten really nice results,” said Nomerotski, “and I would like to improve the speed even more, by another one or two orders of magnitude, to reach the full range of applications.”

Brookhaven’s work on the LSST is funded by the DOE Office of Science. Nomerotski’s work on TimepixCam is supported by Brookhaven’s Laboratory Directed Research and Development Program.