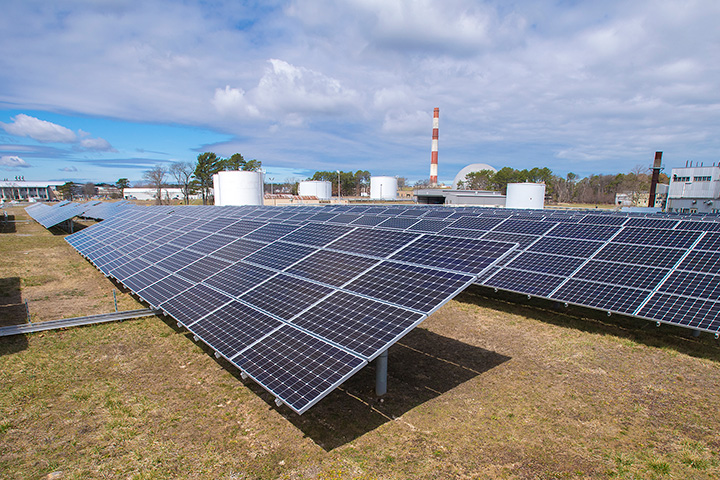 The once-empty racks in the solar array at the Northeast Solar Energy Research Center (NSERC), located at the Department of Energy’s (DOE) Brookhaven National Laboratory, are now filled with functional solar modules.  That’s because a planned expansion of NSERC was recently finished, completing its core section and bringing the total peak capacity of the facility to 907 kilowatts (kW) of renewable solar energy that will be used on the Brookhaven Lab campus.

NSERC serves a dual purpose for Brookhaven Lab.  While it provides a source of renewable energy, helping the Lab meet its sustainability goals, it also serves as a multi-purpose DOE research and test facility for the solar and electric grid industry. NSERC features laboratories for testing solar modules in accordance with industry standards, along with a solar photovoltaic research array for field testing existing or innovative new technologies under actual northeastern weather conditions.

“With this expansion, NSERC will now provide an average of 1million kWh of energy to the Brookhaven campus per year, resulting in an estimated $60,000 per year in net savings on electricity costs for the Lab,” said Bob Lofaro, leader of the Renewable Energy Group. “This gives a significant boost to the Lab’s sustainability efforts using a fully renewable resource.”

NSERC has already fostered new research programs at Brookhaven in the renewable energy area.  As an example, the Lab’s Sustainable Energy Technology Department recently completed a study for the New York State Energy Research and Development Authority (NYSERDA) on the impacts of solar energy generation when it is integrated into the power grid, and data from the NSERC was a key factor in completing that study.  Several additional proposals for studies using NSERC are in various stages of development.

In May 2014, the first 518kW section of the array was completed and became operational.  During that initial development, several additional racks were installed and left empty purposely in anticipation of the expansion.

“It was more cost effective to install the additional racks during the initial construction phase since the construction crews were already on site and mobilized,” said Lofaro.

Work on the expansion was started in the summer of 2016 and was completed in October 2016.  The expansion was funded primarily by a grant from DOE’s Sustainability Performance Office.

The Lab’s vision is for NSERC to become a strong resource for the industry, providing unique research capabilities to address the challenges facing the deployment and integration of sustainable solar energy resources—particularly in the northeastern United States—and helping to ensure the nation’s future energy security. As a DOE facility, NSERC is available for field testing of new technologies that will help to facilitate the integration of renewable energy systems into the grid, as well as help enable the next-generation smart electric grid.

“Since the facility is located on the Brookhaven Lab campus, and the Lab controls the electrical network, NSERC users don’t need special permits or UL listing for equipment to be tested,” said Lofaro. “This is an important advantage for technology developers who need to demonstrate the performance and reliability of their technologies before connecting them to a utility-scale electric grid.”

While the solar array is now essentially complete, two areas are still available for future expansion of the facility, should sponsors come forward with special testing needs.