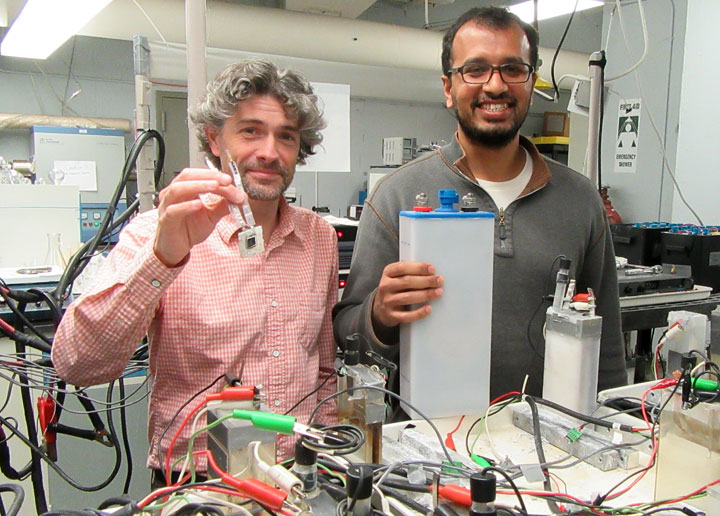 Joshua Gallaway (left) and Gautam Yadav in their lab. Gallaway holds the small test battery they designed for their work at the SRX beamline, while Yadav holds a grid-scale battery of the type they are developing. Photo courtesy Jinchao Huang, CCNY.

Josh Gallaway and Gautam Yadav are currently researchers at the City College of New York (CCNY), part of the City University of New York (CUNY) system. They conduct battery research as part of the CCNY-based CUNY Energy Institute. Gallaway has recently accepted a faculty position at Northeastern University, where he will continue his work.

In two recent visits to National Synchrotron Light Source II (NSLS-II), first in December and then again in March to complete their study, Gallaway and Yadav investigated a material used in common household alkaline batteries. They are researching the material at NSLS-II, a U.S. Department of Energy Office of Science User Facility, to discover how it may be scaled up for much larger applications.

Describe your research at NSLS-II. What material are you studying, and why?

We've been studying manganese dioxide (MnO2) as an electrode for batteries. MnO2 is the same electrode material used in the familiar AA batteries and the like, but we're modifying it and using it a bit differently to get “rechargeability.” To understand the reason we focus on MnO2, think about what you do with a AA battery when you're done with it. Unlike lithium-ion and nickel-cadmium batteries, which are also found in household items, you throw them away with your regular garbage. This shows how inexpensive and safe it is.Our goal is to develop large batteries for the electrical grid, and, at that size, cost and safety become huge concerns. You may have heard about a recent story in which a pair of headphones burst into flames on a flight. This demonstrates why Li-ion-based batteries are bad for the grid. Imagine that happening, but in a battery 100,000 times larger.

The rechargeability of MnO2 is enabled by the presence of three electrochemically active elements in the mix: manganese, bismuth, and copper. We're using the Submicron Resolution X-Ray Spectroscopy (SRX) beamline at NSLS-II because it lets us use two techniques to study the material while it's recharging: x-ray fluorescence (XRF), which lets you locate the elements with fine precision, and x-ray absorption near-edge spectroscopy (XANES), which tells you how many electrons they have. Essentially, we're watching them swap electrons in real time. This gives us insight into the mechanism of what's happening and how these three elements interact.

What draws you to this research?

Josh: I started doing electrochemistry because I believe that energy sustainability is the most important problem to solve in our time.

Gautam: For my doctoral work at Purdue University, I was studying the synthesis of one-dimensional complex metal oxide nanowires for thermoelectric devices. Thermoelectric devices are used in energy generation because they capture waste heat and convert it to electricity. Studying energy-generating devices led me to ask, how do you store the energy? Further research convinced me that batteries are the prime candidates.

I started doing electrochemistry because I believe that energy sustainability is the most important problem to solve in our time.

After graduating I applied to the CUNY Energy Institute, and luckily was accepted into the group of Professor Sanjoy Banerjee (who is the director of the Institute), Josh, and other researchers on the next generation of aqueous-based batteries for grid storage.

As a chemical engineer and materials scientist, I think batteries are fascinating. They are complex devices that we use in our homes every day. Also, you can scale them up and use them for large applications that greatly impact society, like grid storage and electric vehicles. They are intertwined with our lives and are key to a greener future.

Through batteries I have also learned the beautiful subject of electrochemistry and its engineering, and my transition has been made easier by experts and my friends like Josh, Damon Turney, Michael Nyce, Xia Wei, and Jinchao Huang.

Josh: I've spent the last few years focusing on ways to learn more about electrochemical systems by using synchrotron light to collect data on them while they are operating, and this is something I plan to continue doing. One of the advantages of using a synchrotron is that you get two sets of data simultaneously: the electrochemical data like current or voltage, and the synchrotron data, which tells you about the materials. Depending on what technique you are using, it can tell you the crystal structure, the morphology, the oxidation state, or the elemental composition. Since you're getting this data while the system is operating, you might call it “in operando.” Coupling the two sets of data like this gives you a wealth of information about what's happening.

Gautam and I are studying battery materials, and battery materials often have some blind spots in terms of what the molecular-level reaction is. This is because batteries need to be energy dense, and that compels the designer to pack a lot of material into a small volume, which causes interesting things to happen. For example, you might find materials evolving in different ways in different locations inside the battery. The particular material we recently studied at NSLS-II is a layered type of manganese (Mn) dioxide, called birnessite. Many battery materials have layers or tunnels, and indeed I think we can use synchrotron techniques to investigate and better engineer other battery materials.

Gautam: Josh described the work we do very nicely. My main experience in this field is engineering different structures for specific applications. The material we studied at NSLS-II, bismuth- and copper-modified birnessite, which we developed at CCNY, is a novel structure that allows us to access the second electron capacity, which was an age-old problem in the alkaline battery field.

Josh: For years, battery researchers have tried to achieve rechargeability of the “second electron capacity.” What that translates to, in the case of Mn, is that, when charged, all the Mn atoms have a 4+ oxidation state, and when you discharge you take them all down to 2+. That means they’ve all accepted two electrons (with a charge of 2-). Accessing the second electron capacity is key to approaching the theoretical capacity of the material; currently, in rechargeable alkaline batteries, only 10 percent of the theoretical capacity can be tapped.

Gautam: I am also involved in developing other layered materials to use as zinc-based battery anodes, for zinc-ion intercalation and lithium-ion intercalation. I will still be working closely with Josh after he moves to Northeastern, as he is an expert in beamline techniques. We may seek beamtime at NSLS-II to study some of these other materials using the techniques available there.