How did the Proton Get Its Spin? 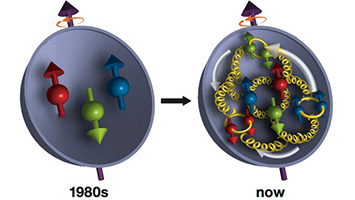 In the 1980s, scientists discovered that a proton's three valance quarks (red, green, blue) account for only a fraction of the proton's overall spin. More recent measurements have revealed that gluons (yellow corkscrews) contribute as much as or possibly more than the quarks.

Calculating a proton's spin used to be an easy college assignment. In fact, Carl Gagliardi remembers answering that question when he was a physics graduate student in the 1970s. But the real answer turned out not to be simple at all. Even Gagliardi's "right" response was disproven by experiments a few years later that turned the field upside-down.

Protons are one of the three particles that make up atoms, the building blocks of the universe. A proton's spin is one of its most basic properties. Because protons are in part made up of quarks, scientists presumed the proton spins were just the sum of the quark spins.

But studies in the 1980s showed that reality is far more complex. Since then, Gagliardi and other researchers have used the unique DOE Office of Science User Facilities at Thomas Jefferson National Accelerator Facility (Jefferson Lab) and Brookhaven National Laboratory to explore this fundamental phenomenon.

Investigating a Force of Nature

Protons always have "spin." The direction and strength of a proton's spin determines its magnetic and electrical properties. Changes to the proton's spin also alter its structure.

"By understanding how [a proton's components] play off of each other to produce spin, we can learn about how Mother Nature builds a proton," said Gagliardi, now a researcher at the Cyclotron Institute at Texas A&M. He collaborates on work at the Relativistic Heavy Ion Collider (RHIC), a DOE Office of Science User Facility at Brookhaven National Laboratory on Long Island, New York.

Having a better grasp of protons' spin and structure could lead to unexpected benefits. Just as James Clerk Maxwell's discoveries about electromagnetism in the 1860s set the foundation for today's electronics, some scientists think understanding proton spin could lead to similar advances.

"[Maxwell's equations] were mankind's mastery over a fundamental force of nature, electromagnetism," said John Lajoie, an Iowa State researcher who works on RHIC. "What we are trying to do is gain a fundamental understanding of the force that binds the quarks to the proton."

"Studying spin in physics has led to a lot of surprises," said Elke-Caroline Aschenauer, who leads Brookhaven's research group focused on proton spin. But nature hasn't given up its secrets easily.

Researchers first thought that each proton consisted entirely of only three quarks, which together determined the spin. Quarks are elementary particles that scientists have not been able to break down into smaller parts.

But the closer they looked, the more complex the picture got. The initial experiment at the European Organization for Nuclear Research (CERN) suggested quark spins contributed almost nothing to the proton spin. Since then, more precise experiments have raised the quark spin contribution to 25 to 30 percent. That leaves a good deal unaccounted for.

Rather than being disappointed, many physicists were thrilled.

"I live for being wrong," said Lajoie. "That's where we learn."

To investigate protons and other subatomic particles, scientists use accelerators to collide them at velocities near the speed of light.

"Particle physicists have not really evolved much further than the days of the cavemen in terms of banging two rocks together," joked Lajoie.

The accelerators at Brookhaven and Jefferson Labs have the unique ability to polarize streams of particles. This means that they coordinate the particles' spins so that they are aligned in the same direction.

At the Continuous Electron Beam Accelerator Facility (CEBAF), a DOE Office of Science User Facility at Jefferson Lab in Newport News, Virginia, the machine shoots a polarized beam of electrons into a stationary target. The target is also polarized. Colliding the beam of electrons with the protons or neutrons in the target gives scientists particularly good insight into quarks' contributions to spin. When the beam strikes the target, particles scatter off at different angles. An electron spectrometer then identifies what types and how many particles resulted from the experiment.

RHIC at Brookhaven sends two beams of protons through a four-mile-long tunnel. When they collide, the particles tear each other apart and regroup immediately. They strike two house-sized detectors that collect data on their direction, momentum, and energy.

"It's just an amazing accomplishment of humankind," said Ernst Sichtermann, a researcher at DOE's Lawrence Berkeley National Laboratory and deputy spokesperson for one of RHIC's experiments.

As the only facility that can polarize and collide protons, RHIC is useful for understanding gluons' contribution. Gluons are the particles that hold quarks together to form protons and neutrons.

Comparing and contrasting results is an essential part of proton spin research. Both laboratories conduct experiments that examine what happens when you collide particles that are spinning in the same direction versus those spinning in opposite directions. To determine how a specific particle, such as a gluon or quark, contributes to spin, researchers compare the number and type of particles that result from different configurations of the beams and target.

One of the main challenges is collecting and analyzing the incredible amount of data. Much of the work focuses on collecting the correct data and minimizing errors or biases.

"That is where one becomes a real physicist," said Gagliardi. "Ninety-five percent of the scientific analysis time is devoted to identifying, quantifying and limiting those biases." 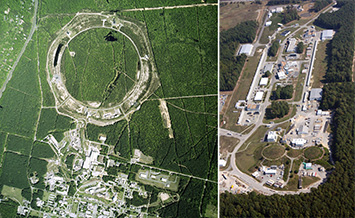 Using these tools, physicists realized that the proton's structure isn't simple at all. It's an ocean of shifting quarks and gluons. In addition, gluons rapidly split into short-lived pairs of quarks and anti-quarks (known as sea quarks). Anti-quarks have similar characteristic to quarks, except the opposite charge.

A number of experiments have examined possible sources of spin.

One experiment at RHIC found that the spins of anti-quarks often aren't aligned in the same direction. As a result, it's unlikely they contribute much to the proton's spin.

Another study tackled the role of gluons. In 2014, scientists found experimental data that demonstrated gluons contribute significantly to proton spin. In fact, they contribute about 20 to 30 percent of it.

A follow-on experiment focused on "wimpy" gluons with low momentum. Previous studies had underestimated the contribution of these gluons. But collisions at much higher energies found that while single "wimpy" gluons contribute almost nothing, the sheer number of them results in quite a bit of influence.

There's one major source that researchers haven't yet explored: orbital angular momentum. Orbital angular momentum comes from the movement of the quarks and gluons relative to each other. While theorists have developed simulations that model this contribution, scientists haven't had the equipment to test them.

That will change with the opening of a major upgrade to CEBAF. Doubling the accelerator's energy and providing better resolution will allow scientists to study orbital angular momentum. The lab staff members expect to have the upgraded accelerator fully running in the next year.

"There's no other beam like it elsewhere in the world," said Robert McKeown, Jefferson Lab's deputy director of research.

The Office of Science is the single largest supporter of basic energy research in the physical sciences in the United States and is working to address some of the most pressing challenges of our time. For more information please visit http://science.energy.gov.