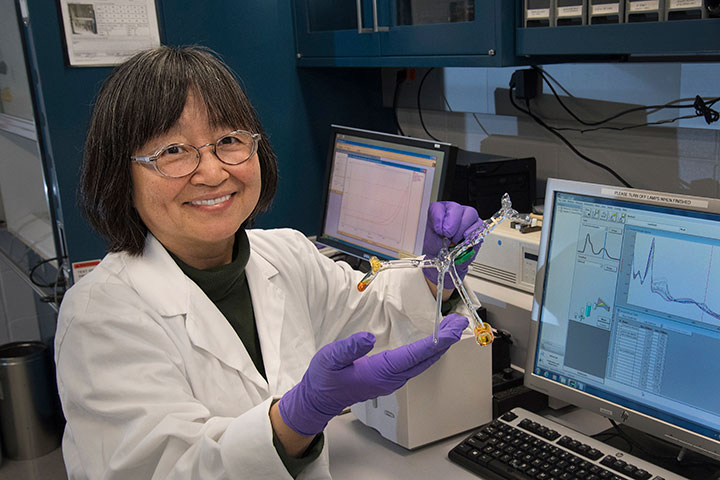 Etsuko Fujita, a senior chemist at the U.S. Department of Energy’s (DOE) Brookhaven National Laboratory, will be recognized as a “highly accomplished Asian American professional” at the ninth annual Asian American and Pacific Islander Heritage Month Celebration. The event will take place Saturday, May 13 at Stony Brook University.

“The award was a surprise,” said Fujita. “As a researcher I want to give back to society, so I am very honored to be recognized for my scientific contributions. I thank my coworkers here and my collaborators in Japan, with whom I really enjoy working, as well as the Lab and the DOE for the opportunity and support they have provided me.”

Fujita leads the Artificial Photosynthesis group at Brookhaven Lab. The group develops systems that use solar energy to create renewable fuels—artificial analogues of the way plants take in sunlight, carbon dioxide, and water to create sugars. In the analogues developed by Fujita’s team, the system uses solar energy to convert carbon dioxide and water into oxygen gas and carbon-based fuels.

As a researcher I want to give back to society, so I am very honored to be recognized for my scientific contributions.

“There are two reasons we do this,” said Fujita. “One is to help mitigate the global warming caused by emission of carbon dioxide, and the other is to find renewable energy sources in the face of fossil fuel depletion. We want to use sunlight to make renewable fuels from carbon dioxide and water.”

Fujita’s group is also working on two methods of making hydrogen gas, which can be used in fuel cells as a clean alternative to fossil fuels. One process splits water molecules into hydrogen and oxygen gases using electricity from renewable sources, such as solar or wind power. The other uses energy directly from sunlight to detach hydrogen atoms from water.

Fujita’s group is also working on ways to combine hydrogen, generated through either of these processes, with carbon dioxide to make formic acid—a liquid that could serve as an efficient hydrogen storage and transport medium. The process can also be reversed to release both gases in a carbon-neutral cycle.

Each of these processes—production, storage, and release of fuels—requires reaction-assisting molecules known as catalysts. Fujita’s group strives to use non-precious, abundant metals to make these molecules, and focuses on designing durable catalysts that only produce the desired chemicals and that produce them quickly. As the team’s name suggests, they take much of their design inspiration from the naturally occurring molecules in plants.

Etsuko Fujita earned a B.S. in chemistry from Ochanomizu University in Japan in 1972, and a Ph.D. in chemistry from the Georgia Institute of Technology in 1976. That same year she joined Brookhaven Lab as a research associate. Fujita was promoted to senior chemist with tenure in 2008, the same year she received a Brookhaven Science and Technology Award.

The Asian American and Pacific Islander Heritage Month Celebration will feature musical performances, dance, and martial arts, as well as presentation of awards to honorees. For additional information on the event, go to: http://www.scaaab.org/2017_asian_american__pacific_islander_heritage_month_51317

Fujita’s work is supported by the U.S. Department of Energy’s Office of Science.