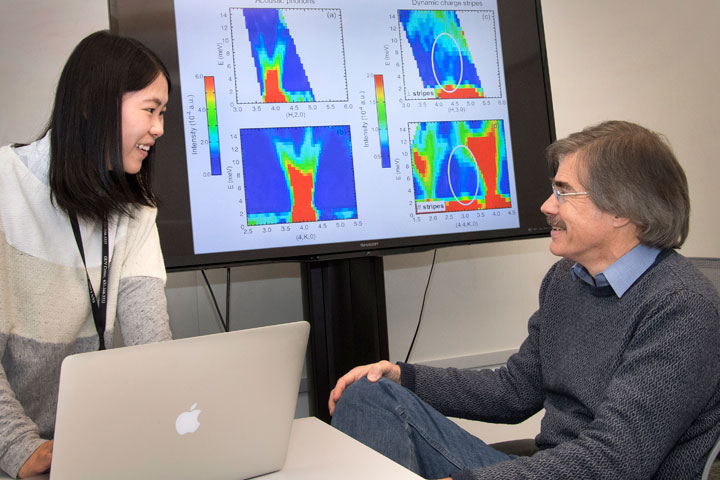 High-temperature superconductivity offers perfect conveyance of electricity, but it does so at the price of extreme cold and an ever-elusive mechanism. If understood, scientists might push superconductivity into warmer temperatures and radically enhance power grids, consumer electronics, and more—but the puzzle has persisted for more than 30 years.

Now, scientists have broken new ground by approaching from a counter-intuitive angle: probing so-called “bad metals” that conduct electricity poorly. The researchers found that “stripes” of electronic charge, which may play a key role in superconductivity, persist across surprisingly high temperatures, shape conductivity, and have direction-dependent properties.

The results, which examined the model system of custom-grown nickel-oxide materials, were published online April 28 in the journal Physical Review Letters.

“This is a step on the path to resolving the mechanism of high-temperature superconductivity and the complex role of charge stripes,” said Ruidan Zhong, lead author of the study and a PhD student at Stony Brook University. “We captured snapshots of dynamic stripes fluctuating in a liquid phase, where they have freedom to align and intermittently allow the flow of electricity.”

The collaboration used the Spallation Neutron Source at the U.S. Department of Energy’s (DOE) Oak Ridge National Laboratory to measure the stripes.

“We’ve been studying stripe ordering for two decades, and the Oak Ridge instruments are perfect for exploring new territory,” said coauthor John Tranquada, a physicist at DOE’s Brookhaven National Laboratory. “The signal we were looking for was very weak, and was buried in a jungle of much stronger signals—but we found it.”

Bombarding a bit of alchemy

For decades scientists have been able to take certain copper-oxide (cuprate) insulators—meaning they do not conduct electricity—and substitute atoms to tweak the electron content and then induce superconductivity at frigid temperatures. While stripes likely play an essential role, their presence and behavior across temperatures is particularly difficult to track.

“In cuprate superconductors, we have learned how to detect charge stripes when they are pinned to the atomic lattice, but once they start to move, we lose sight of them,” Tranquada said. “So, instead of a superconducting compound of lanthanum, strontium, copper, and oxygen, we did a bit of alchemy to replace the copper with nickel.”

In an elegant process led by study coauthor and Brookhaven scientist Genda Gu, the nickel-oxide—or nickelate—crystals were grown from a liquid phase without the use of any container. As they offered a similar structure to cuprates, but with stronger stripe ordering, the elusive charge stripes would be easier to spot, assuming the right tool could be found to peer inside.

The team turned to the time-of-flight Hybrid Spectrometer (HYSPEC) at Oak Ridge Lab’s Spallation Neutron Source, a DOE Office of Science User Facility. The instrument—the product of a proposal first developed at Brookhaven—bombarded the nickelate sample with a beam of neutrons that then scatter off the atomic structure. By measuring the time it takes for the scattered neutrons to reach detectors, the scientists deduced the energy lost or gained—this in turn revealed the presence or absence of the stripes.

The neutron scattering results, which require intense computer processing, provided evidence of a so-called nematic phase in the nickelate.

“Electronic nematic phases are driven by electron correlations that break the rotational symmetry of the material’s crystal lattice,” Zhong said. “In the nickelate, these wave-like, correlated stripes move through the material and directly impact conductivity.”

As Tranquada explained, this can be visualized as schools of long, slender fish swimming through some sunken structure.

“They move in tight, highly coordinated, and elusive packs,” Tranquada said. “Swimming with these fish in a parallel direction can be quite smooth, but swimming against that coordinated group in a perpendicular direction is challenging. This is a bit like the way current travels through our nickelate and interacts with the charge waves.”

The precise way in which these persistent and curious charge stripes influence conductivity in the nickelates—and more importantly in the analogous superconducting cuprates—remains unclear.

“We hope that this work offers new opportunities for theory and experiment to explore high temperature superconductivity,” Zhong said. “As we keep mapping these materials, the mechanism will eventually run out of places to hide.”

The other authors on the study were Barry Winn of Oak Ridge National Lab and Dmitry Reznik of the University of Colorado, Boulder.

This work was supported by DOE’s Office of Science.