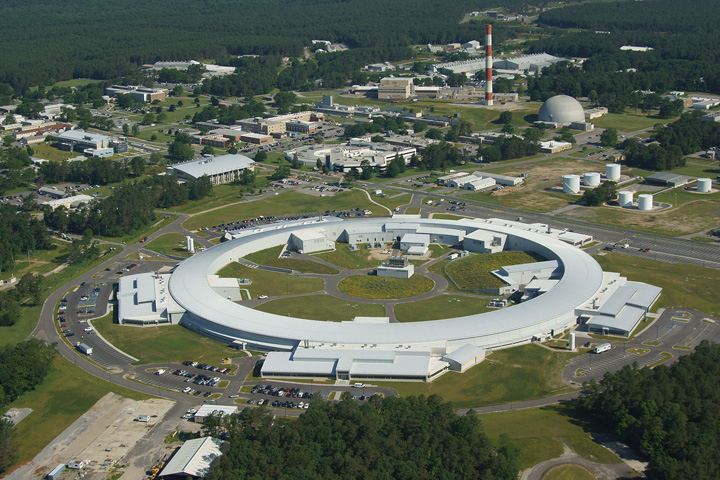 Brookhaven National Laboratory’s National Synchrotron Light Source II (NSLS-II), one of the world’s most advanced synchrotron light sources, recently achieved an important milestone in its accelerator development: the bunches of electrons circling the facility’s storage ring at nearly light speed are now doing so at a current of 300 milliamps (mA).

The ramp-up is good news for the NSLS-II scientific program. Increasing the current in the storage ring increases the flux and brightness of the x-ray beams that are produced, which increases the breadth and depth of research that can be done at NSLS-II, a U.S. Department of Energy Office of Science User Facility. Data can be collected more quickly, and the data quality is improved.

“Increasing the current in the complex machines that are the NSLS-II accelerators is certainly not an easy or quick task – it is not achieved via the flip of a switch,” said NSLS-II Director, and Deputy Associate Laboratory Director for Energy and Photon Sciences, John Hill. “This goal was reached because of the expertise and talent of the members of the NSLS-II Accelerator Division who have worked very hard to push the performance of this remarkable machine to this level in what is actually a very short amount of time for such machines. I am very proud of them and the users are very appreciative of their efforts.”

The scheduled increase to 300 mA, up from 250 mA, took place on April 5 during spring operations. Since NSLS-II began operating in October 2014, the NSLS-II Accelerator Systems Division has made excellent progress in ramping up the current, which was just 25 mA at the start of operations.

The team faced a series of unexpected challenges, including overheating of some of the storage-ring vacuum chambers. In response, they are implementing several programs to reduce overheating.  Another challenge is sustaining a high reliability of operations as the machine ramps up to higher current levels. The NSLS-II accelerators’ reliability – defined as the ratio of the actual operating beam time delivered to the beamlines compared to the scheduled beam time – is currently 96.7 percent. Maintaining this level of reliability takes constant focus from the accelerator team, which has to improve and develop the machine subsystems to increase performance and at the same time understand and react to faults as quickly as possible to improve reliability.

Next, the accelerator team will work to reach 400 mA, which they hope to achieve during fiscal year 2018.

“We will have to operate routinely with a yet higher current and still deliver reliability of more than 95 percent,” said Timur Shaftan, an NSLS-II accelerator physicist in the Accelerator Systems Division. “That corresponds to an average of less than about one hour of downtime a day. This is a tough requirement for our newly built facility, which has only been running for two-and-a-half years.”

He added, “However, we are very proud of what we have been able to achieve to date and we will do our best to keep this up going forward!”