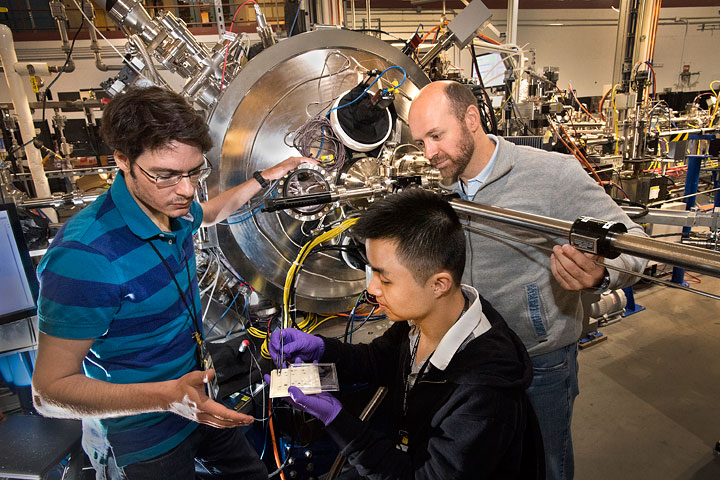 Riccardo Comin is an Assistant Professor of Physics at the Massachusetts Institute of Technology (MIT), where he leads the Photon Scattering Laboratory in the division of Condensed Matter Experiments. He performs studies on quantum materials using the Coherent Soft X-Ray scattering beamline, 23-ID-1, at the National Synchrotron Light Source II (NSLS-II), a U.S. Department of Energy Office of Science User Facility at Brookhaven Lab.

Describe your experiment(s) at NSLS-II. What kind of material are you studying and why?

Our research is centered on the study of quantum solids. A quantum solid is hard to define, but in essence it’s a material in which quantum mechanics does not only matter at the atomic level, but in fact controls the material’s overall bulk, or “macroscale,” behavior. This quantum mechanical behavior paves the way for states of matter that cannot be found in ordinary metals or semiconductors. Understanding and controlling these phenomena is a stepping stone for applications beyond conventional electronics, broadly called “quantum technologies.” Examples include quantum computing, efficient energy transport, and high-speed railroads. Our mission is to design and craft new quantum materials by leveraging the insights from advanced photon scattering techniques.

At NSLS-II, we use the x-ray beam to study the organization of these materials’ electrons, which are at the core of the functionalities of quantum solids. Similar to how ordinary matter can be a gas, liquid, or solid, electrons can form different phases. The particular ways in which the electrons arrange themselves can allow very interesting quantum behaviors to emerge.

Can you elaborate on the finer details of your work?

As I mentioned, atomic or molecular systems are constituted by ensembles of particles that can form different phases of matter: gas, liquid, or solid (crystal or glass). The lower the temperature, the more ordered these phases become. The highest possible ordering is achieved in crystalline matter, where atoms are arranged on a regular grid, forming a periodic lattice. Electrons form similar phases of matter: Fermi gas, Fermi liquid, Fermi glasses, and crystals. The added charm of electrons is that they possess multiple degrees of freedom—charge, spin, and orbital—which can each arrange themselves in a periodic fashion, forming an “electronic lattice.” We can thus have ordered electronic phases such as charge order, where mobile electrons ‘freeze’ into static ripples akin to sand waves on a dune; spin order, where the spin moments can arrange in a variety of fashions (for example, parallel in a ferromagnet and antiparallel in an antiferromagnet); and orbital order, where it’s the angular momentum of the electrons that is modulated periodically.

We study all of these things! But they won’t show up in any compound or material. We need electrons to interact closely in order for them to realize they are better off arranged in tidy, regular patterns.  Therefore, we look for electronic crystals in systems with strong interactions between electrons, particularly in compounds based on transition metals, such as copper oxides (holding the record for highest-temperature superconductivity among solids), iron arsenides (also superconductors), and nickel oxides (where the electronic order drives a metal-insulator transition). And we look for electronic crystals characterized by orderings of the charge or spin. We are particularly interested in disclosing how these phases interact with other electronic phases like superconductivity. Do they compete or coexist? Do they originate from a common “parent” state? How are they affected by experimental conditions (temperature, doping, pressure, or magnetic field)?

Why is NSLS-II particularly suited for this experiment?

To answer all of the above questions, we need an experimental tool that is sensitive to periodic structures and, at the same time, to electrons. We use a special version of diffraction, called resonant diffraction, or resonant scattering, where we tune the x-ray energy to specific resonances of electrons.

To perform these experiments, we need the liberty to tune the x-ray energy to the resonance of interest. That’s where NSLS-II comes in, with its bright, coherent, and broadly tunable photon beam. Currently, we perform most of our experiments at beamline 23-ID-1. We have recently started doing hard x-ray resonant diffraction on iron-based superconductors, to search for new electronic orders never observed before.

We are also exploring the unprecedented opportunities offered by these new instruments, in particular the use of the coherent x-ray diffraction, which can be thought of as a more informative version of x-ray diffraction that enables imaging the electronic ‘fabric’ down at the nanoscale, in the spatial range of 10-20 nanometers (nm). This is approximately one-ten-thousandth the width of a human hair.

What led you to this field of research?

I was lured into quantum solids during my PhD studies. I have always been curious about physical phenomena (ask my parents!), and the physics of strongly correlated systems is one of the most intellectually-challenging problems I have ever worked on.

Our work on quantum solids follows a more or less rational plan of study but at its core is driven by some kind of intuition. New discoveries in this area of research are often serendipitous and surprises await around the corner, as when high-temperature superconductivity was originally found more than 30 years ago. We are constantly looking to shed light on the dark corners of a vast territory that is defined by the virtually limitless combinations between chemistry (periodic table) and physics (control parameters: temperature, pressure, etc.).

In addition to the work at NSLS-II, we perform optical (Raman) scattering in our laboratory at MIT, as a function of temperature, pressure, and strain. Our explorations are supported by the synthesis of new compounds where we try to harness quantum electronic behavior.

Tell us about your group.

The exciting research we conduct at NSLS-II is directly a result of the dedication of our group members. They endure sleepless nights (and days!) at the beamline to get the best data, allowing us to push the envelope of scientific knowledge on these fascinating quantum systems. I have the privilege to work with excellent scientists and young talents: our graduate students Jiarui Li and Min Gu Kang; our postdocs Jonathan (Johnny) Pelliciari and Zhihai Zhu; and several undergraduate researchers: Da Zhou, Grace Zhang, Kevin Limanta, Cheng Xiang, and Shangjie Xue. A special mention goes to Jiarui and Johnny, who have been spearheading our recent efforts on coherent resonant diffraction and have done invaluable work in advancing this project at a pace that wasn’t in our best hopes.

I would also like to acknowledge the beamline scientists who allowed us to join collaborative projects, such as the nanodiffraction commissioning effort at beamline 23-ID-1, and without whom we would not be at the forefront of research into quantum systems. We are very indebted to Claudio Mazzoli, Stuart Wilkins, Andi Barbour, and Christie Nelson for their continuing support, which is instrumental for our joint work at NSLS-II and strategic for our research in the long run.