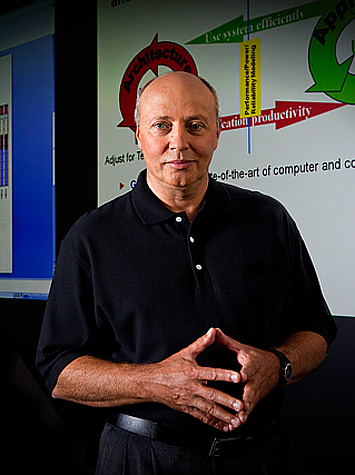 The rapid growth in internet traffic and users and the voluminous data exchanges required between organizations to conduct business make the protection of the nation’s critical assets—including power grid infrastructure, telecommunication networks, and nuclear power stations—a big data–real-time analysis challenge. National laboratories such as the U.S. Department of Energy’s (DOE) Brookhaven National Laboratory are prepared to tackle that challenge, in large part because of their expertise in big data processing.

Brookhaven Lab processes hundreds of petabytes of data every year on site and supports exabyte-scale analytics worldwide. Through experience in scientific big data research, Brookhaven has learned that big data solutions are not only based on new software but also on whole-system approaches from the hardware up. The real-time analysis of high-velocity data streams is pushing existing storage, network, and computing systems beyond their limits. As scientists approach the end of Moore’s law—the idea that the processing power of computers doubles every two years—they need new computing architectures that can take the place of these systems to support real-time big data analysis.

From field-programmable gate arrays (configurable computing devices) integrated with traditional central processing units, and quantum computing that takes advantage of the way the tiniest of particles behave, to neuromorphic computing that mimics the neural networks of the human brain, these architectures are someday expected to perform operations much more quickly and with less energy. Ensuring the optimal performance of these architectures and achieving the timescales needed for different national security applications requires evaluating new hardware technologies and developing the needed system software, programming models, and analytical software in tandem. This integrated research, development, and evaluation effort will be the focus of the new Computing for National Security Department that Brookhaven’s Computational Science Initiative (CSI) recently formed.

“We see a huge potential to make a positive impact on the nation’s security by bringing our unique extreme-scale data expertise to bear on challenges of national importance,” said CSI Director Kerstin Kleese van Dam. “The formation of this new department in CSI is our first step in this direction.”

The department will leverage the efforts of the other CSI areas—the Computer Science and Mathematics Department, Center for Data-Driven Discovery, Computational Science Laboratory, and Scientific Data and Computing Center. Members of the department will collaborate with computer scientists, applied mathematicians, computational scientists, and domain science researchers. Partnerships with other national laboratories, colleges and universities, research institutions, and industry will also be important to advancing the department’s research programs.

An expert in high-performance computing

“Adolfy is a long-time principal investigator in DOE’s Advanced Scientific Computing Research (ASCR) programs,” said Kleese van Dam. “At Brookhaven, he will continue in this capacity and contribute to solving computing challenges faced by other federal agencies, including those within the Department of Defense, such as the Defense Threat Reduction Agency and Defense Advanced Research Projects Agency, and the National Nuclear Security Administration. In addition, he will work closely with me and my leadership team to further CSI’s overall computing endeavors.”

Hoisie comes to Brookhaven Lab from DOE’s Pacific Northwest National Laboratory (PNNL). He first joined PNNL as a laboratory fellow in 2010, and went on to direct the Advanced Computing, Mathematics, and Data Division; serve as PNNL’s lead for DOE’s ASCR programs; and generally carry out flagship activities in high-end computing, such as the Center for Advanced Architectures Evaluation (CENATE), which he spearheaded and directed.

Prior to PNNL, he held several senior scientific and leadership positions at DOE’s Los Alamos National Laboratory, including director of the Advanced Computing Laboratory and leader of the Computer Science for High Performance Computing (HPC) Group and its Performance and Architecture Laboratory.

Before joining the DOE labs, he was a senior scientist at Cornell University, where he led research in performance modeling, optimization, and engineering for supercomputer systems and applications.

“Joining Brookhaven Lab is an important milestone in my scientific and leadership career,” said Hoisie, who began his new role on September 11. “I was impressed by the strategic thinking of the leadership and the significant emphasis on growing all aspects of high-end computing. Moreover, Brookhaven’s scientific capabilities that require computing solutions from world-class big data instruments to simulations are great motivators for someone working in my field. The scientific applications at the Lab are data-intensive and employ state-of-the-art analysis techniques. The similarities and synergies between these applications and many of the computing challenges in the national security arena are very significant.”

Hoisie is the recipient of several awards for research and teaching excellence—including the 1996 Gordon Bell Award from the Association for Computing Machinery for his work in parallel computing—and is actively involved in technical leadership roles in the HPC community, organizing conferences and serving on committees and editorial and advisory boards. His research on HPC and performance analysis has been featured in more than 100 peer-reviewed publications, and he is the co-author on three books.

“With my colleagues in CSI, I will strive to take Brookhaven to the status of a true computing powerhouse, solving problems of societal interest in science and national security,” said Hoisie. “Given the science-driven environment at the Lab and the talent of the researchers, I strongly believe that this tall-order goal is well within reach.”