516th Brookhaven Lecture on Tuesday, 8/8: 'From NSLS to NSLS-II and Beyond: Accelerator Physics Challenges' 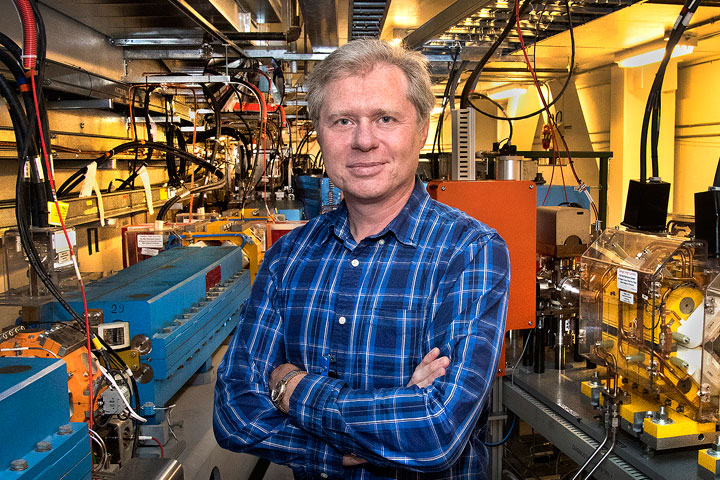 What was once considered a nuisance has become a pillar in scientists' portfolio of tools for cutting-edge research.

Nearly a half-century ago, scientists considered the synchrotron light appearing in their electron accelerators a severe hindrance to producing the high energy particles they needed to study the fundamental forces in nature. This "nuisance" light, however, had extremely useful characteristics, especially after Brookhaven scientists Renate Chasman and G. Kenneth Green developed a new concept to control high-energy electrons. The concept they developed in the 1970s resulted in very bright synchrotron light beams for investigations in many fields of science, and led to the rapid growth of major light source facilities around the globe. One of the earliest of these was the original National Synchrotron Light Source at Brookhaven Lab, which became home to two Nobel Prize-winning discoveries and countless others.

Ongoing efforts to improve synchrotron light sources have resulted in state-of-the-art facilities such as the National Synchrotron Light Source II (NSLS-II), a U.S. Department of Energy Office of Science User Facility at Brookhaven Lab with X-rays 10,000 times brighter than its predecessor. The accelerator physicists who design these light sources and improve capabilities continue to encounter new challenges and opportunities.

Join Victor Smalyuk of the NSLS-II for the 516th Brookhaven Lecture, titled "From NSLS to NSLS-II and Beyond: Accelerator Physics Challenges" in Berkner Hall at 4 p.m. on Tuesday, Aug. 8. All are invited to this free talk, which is open to the public. Refreshments will be offered before and after the lecture. Visitors to the Lab 16 and older must carry a photo ID while on site.

Smalyuk will begin his talk with highlights from 90 years of particle accelerators—including several milestones achieved at Brookhaven Lab during its 70-year history. He will then focus his discussion on synchrotron light sources, electron and photon beam properties, and accelerator advances that have resulted in increasingly bright light for science, with specific examples from NSLS-II.

To join Smalyuk for dinner at a restaurant off site after the talk, contact Barbara Moebes (Ext. 7159).

Smalyuk leads the Accelerator Physics group for NSLS-II at Brookhaven Lab. He earned a master's of science in physics at Novosibirak State University in Russia in 1992, and a doctorate of philosophy in physics and mathematics in 1999 and doctorate of science in physics and mathematics in 2011—both at Budker Institute of Nuclear Physics, also in Russia. He continued research at Budker from 1992 to 2000 and then joined Sincrotrone Trieste in 2001. He returned to Budker from 2003 to 2011 and arrived at Brookhaven Lab in 2012 to design and install the beam instrumentation for NSLS-II's booster. He then worked at the Diamond Light Source in the United Kingdom from 2013 to 2014, and returned to Brookhaven in 2015.