The Moon and Gravitational Impacts on NSLS-II 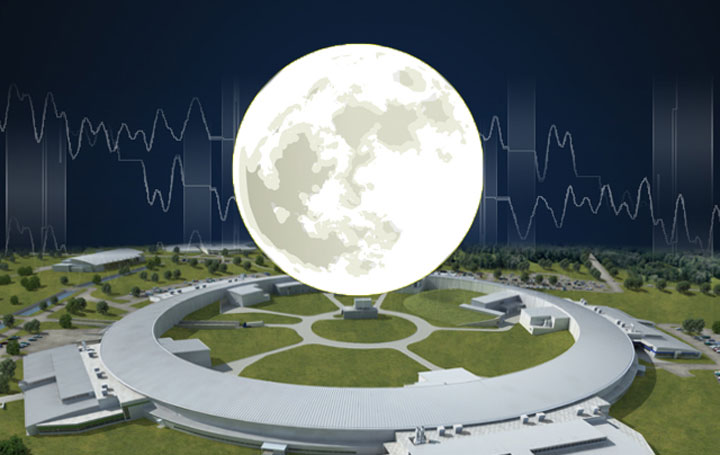 Night and day, as the moon orbits around earth and the earth around the sun, the gravitational forces of these celestial bodies pull on the earth. This pulling force is what causes the earth’s sea levels to rise and fall, a phenomenon we call the “tides.” But did you know that land, too, experiences a tide?

Just like sea levels rise and fall, the earth’s crust changes shape with the phase of the moon. We can’t see or feel these changes as easily as we can observe the ocean tides because the earth’s crust is far more rigid and stable than water. Highly precise machines, however, like the National Synchrotron Light Source II (NSLS-II)—a U.S. Department of Energy Office of Science User Facility—can be significantly affected by this tidal force.

“We think about the tides in terms of the water, but there’s also a tide in the earth’s crust,” said Jim Rose, the radio frequency group leader at NSLS-II. “It causes the whole area of land underneath NSLS-II’s accelerator to move ever so slightly, and the land will actually move the accelerator with it.” 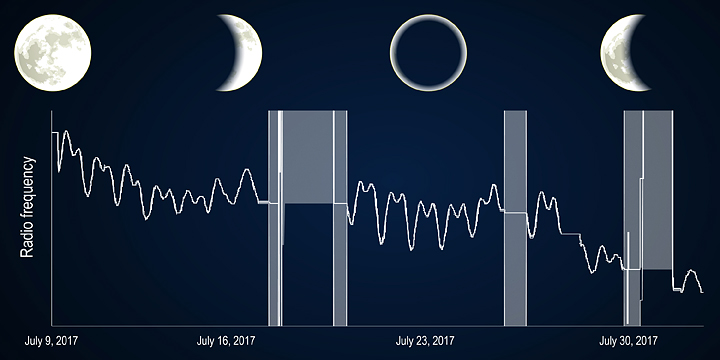 This image depicts the daily changes in NSLS-II's radio frequency in accordance to the phases of the moon. Scientists at NSLS-II have observed that the effects of the moon's phases appear as a distinct dip that moves across the peaks in the data above. The alignment between the moon, sun, and earth changes the gravitational pull on our planet, and also determines whether we see a full moon, waning moon, or even no moon.

This slight movement of the earth’s surface minutely changes the shape of the accelerator ring at NSLS-II every day, and therefore the position of the electron beam within the ring. Since the electron beam is responsible for delivering NSLS-II’s ultra-bright x-rays, if it becomes off-centered from the accelerator ring, the quality of NSLS-II’s x-rays could be significantly reduced.

“We knew that there would be daily and annual changes to the beam orbit, so when we designed NSLS-II, a frequency feedback system was envisioned and designed to correct the beam’s position based on the pull of the moon and the sun,” said Rose. 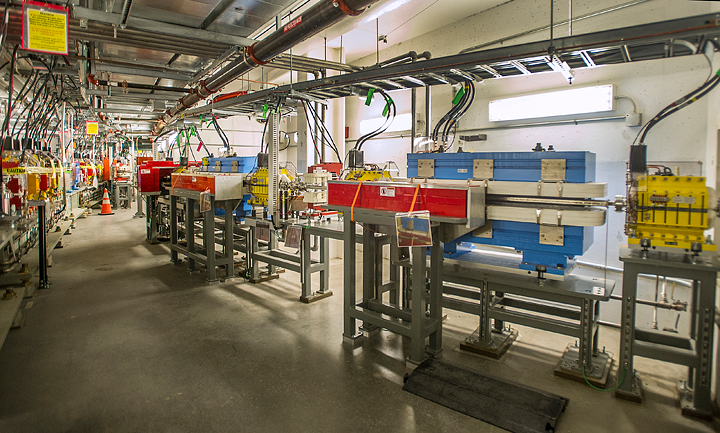 A view of the NSLS-II magnet girders, which help align the orbit of the electron beam.

Like all synchrotrons, NSLS-II uses radio waves to accelerate its electron beam. A frequency feedback system, commissioned by Brookhaven physicist Guimei Wang, corrects the position of the electron beam by manipulating the frequency of these radio waves to compensate for the moon’s tidal forces. This changes the way the electron beam is accelerated, correcting the orbit of the beam and allowing NSLS-II to run efficiently at all times—regardless of the activity of our closest celestial neighbor.