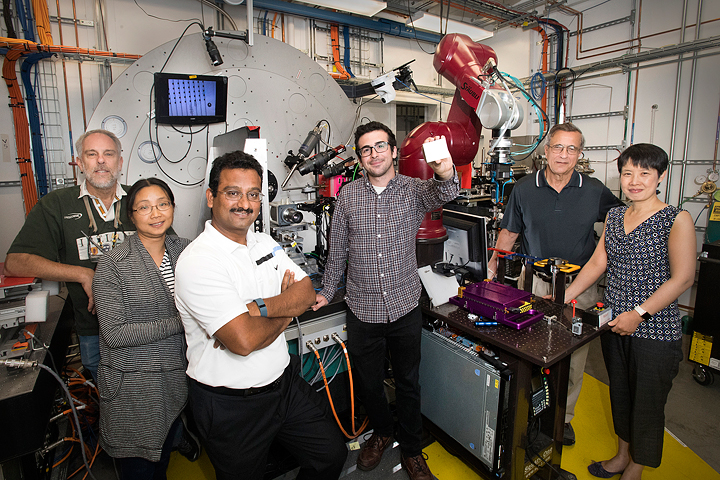 Researchers from Stony Brook University used the National Synchrotron Light Source II to characterize the physics of how light moves within scintillators. They're the first group to directly measure this phenomenon. Adrian Howansky (center), a Ph.D. candidate at SBU's Health Sciences Center, is shown holding one type of scintillator the group studied.

X-ray imaging is a widespread technique for viewing the internal structures of matter. In the medical field, x-ray imaging is used to generate images of the body’s internal structure for diagnostic and interventional purposes. The method works by projecting x-rays though a patient and capturing them with an x-ray detector to produce a “shadow image” of the patient’s body. While x-ray imaging works similarly across all its applications, it presents a distinct problem to the medical industry.

“There are competing challenges in medical x-ray imaging,” said Adrian Howansky, a Ph.D. candidate at SBU’s Health Sciences Center. “You want to detect as many x-rays as possible to produce a high-quality image and make the best diagnosis, but you also need to limit the number of x-rays you put through the patient to minimize their safety risk.”

X-rays can be harmful to patients if they are received in large or multiple doses. That’s why the SBU team sought to optimize x-ray detectors by understanding the physics of how they work. If they could define the exact way these detectors produce an image, the team could identify methods for improving the images without increasing the number of x-rays sent through the patient. To do this, the scientists studied the most crucial component of the x-ray detector, called the scintillator.  This material, whose thickness can be as little as 200 micrometers, is responsible for absorbing x-rays and turning them into bursts of visible light.

“Up until our experiment here at NSLS-II, nobody has been able to precisely describe how light moves within scintillators to form an image,” Howansky said. 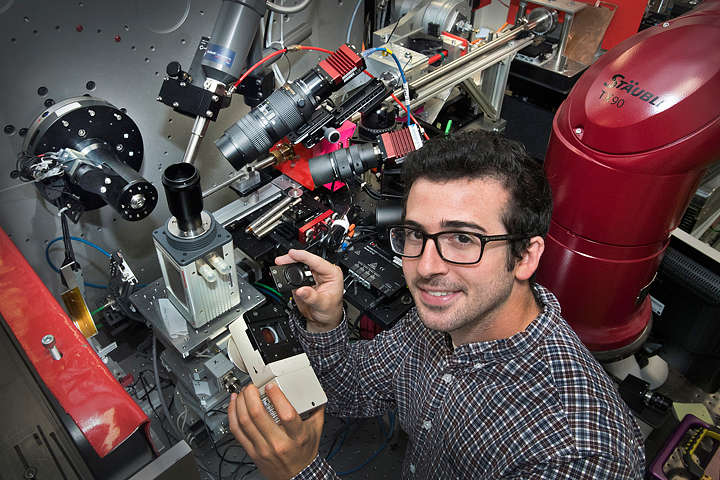 What scientists did know is that when light bounces around a scintillator before it is detected, it produces “blur” that reduces image resolution. Random variations in that blur can also contribute additional noise to the x-ray image. If this phenomenon could be directly observed and understood, scientists could identify ways to improve the performance of x-ray detectors and the quality of the images they produce—and reduce the number of x-rays needed to make usable images.

The SBU team searched for the sources of this noise by analyzing different types of scintillators at beamline 28-ID-2 at NSLS-II. Using a novel approach, the scientists imaged individual x-rays at known points in the scintillator to eliminate confounding factors.

“By putting single x-rays at precise depths inside of the scintillators, we were able to characterize exactly how light scatters and gets collected from different points of origin. This allows us to pinpoint each source of noise in the images that scintillators make,” Howansky said. “We’re the first group to be able to directly measure this phenomenon because of the resources at NSLS-II.”

Rick Lubinsky, an assistant research professor in radiology at SBU, said, “It’s amazing what we are able to do with the help of beamline scientists at NSLS-II. They created the perfect x-ray beam for our research—just the right energy level and just the right shape. The beam was so thin that we could actually move it up and down inside of the scintillator and resolve what was happening. The brightness and intensity of the beam is incredible.”

NSLS-II was one of the few places the SBU team could find the high spatial resolution and variable high-energy x-rays they needed to conduct their research. “But the proposal this team brought to NSLS-II was not within the scope of the beamline’s scientific program,” said Sanjit Ghose, the beamline scientist at 28-ID-2. “The irony is that this beamline is one of the few places they could do their experiment.” Ghose and Eric Dooryhee—the group leader for the scientific program that includes beamline 28-ID-2—worked hard to ensure the SBU team would be able to conduct this critically important research at NSLS-II. Ghose noted that other scientists whose research does not fit within the scientific programs at NSLS-II beamlines can reach out to the beamline scientists to discuss research opportunities and potentially test the feasibility of their experiments. 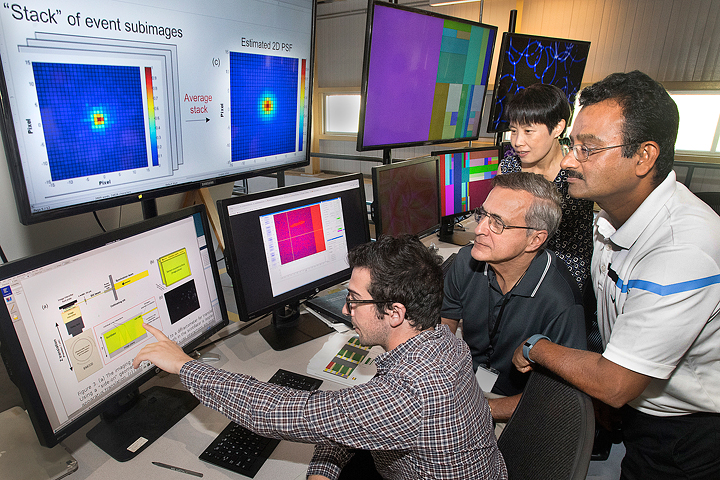 “The arrangement of this user facility makes a lot of research possible that otherwise wouldn’t be,” said Wei Zhao, a professor of radiology and biomedical engineering at SBU.

Now that the SBU team has gained fundamental knowledge of the physics of scintillators, they have already begun to research deeper questions, and are working with industry to produce the next generation of x-ray detectors.

“The study has drawn attention from the medical community and our industrial collaborator that makes high resolution scintillators,” said Zhao. “We’re already able to suggest several ways to improve scintillators, and samples are being made by our collaborator for our group to study.”

In addition to improving x-ray detectors for medical diagnoses, the results of this study could improve x-ray detectors across the board, including those for dental imaging, security imaging, and synchrotron science.