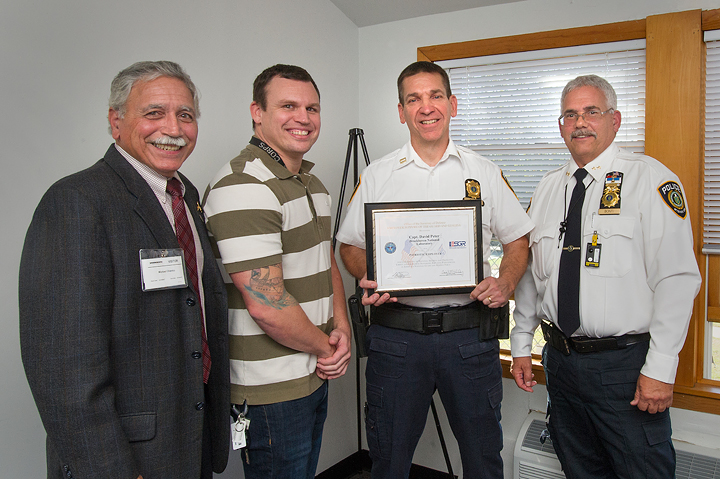 Brookhaven Lab Police Captain David Peter was honored with a “Patriotic Award” from the U.S. Department of Defense’s Employer Support of the Guard and Reserve (ESGR) program for his work in assisting fellow police officers who are also veterans obtain benefits under the United States G.I. Bill.  Individuals can only be nominated for this award by another military service member or a spouse. In this case, Peter was nominated by Stephen Buczak, a security police officer (SPO) in the Laboratory Protection Division. When Buczak, who served five years in the U.S. Marine Corps (USMC) before coming to work at the Lab, received word that his nomination of Peter was approved, he was thrilled.

Captain Peter guided me through the process and I will be forever grateful to him and to the Laboratory for their support of veterans.

“Captain Peter has guided me through the process of obtaining stipends that help make up for my loss of salary when doing my weekend reserve duty or my two weeks of annual reserve training as part of the 106th Air National Guard in Westhampton,” said Buczak. “I will be forever grateful to him. I am also grateful to the Laboratory for its policy allowing us to decide if we want to use our vacation time and accept just our military stipend, or split the difference so that we don’t need to use all our vacation time or lose salary while on military reserve duty. This is a huge asset for me as a young man with a family.”

The Laboratory also ensures the continuity of medical benefits while reservists are away on duty.

Peter, who also served in the USMC, is a certifying official for the Department of Veterans Affairs. These credentials allow him to mentor and guide veterans through the process of using their earned benefits for vocational and educational opportunities through the G.I. Bill.

“The process can be somewhat complex as it requires submitting your training program for certification,” said Peter who has helped at least ten SPOs obtain stipends while they were going through their initial U.S. Department of Energy Security Police Officer Training and their on-the-job training at the Lab. “The program extends an opportunity for veterans to use the benefits of the GI Bill to find a career that suits them when they return home after serving our nation.” 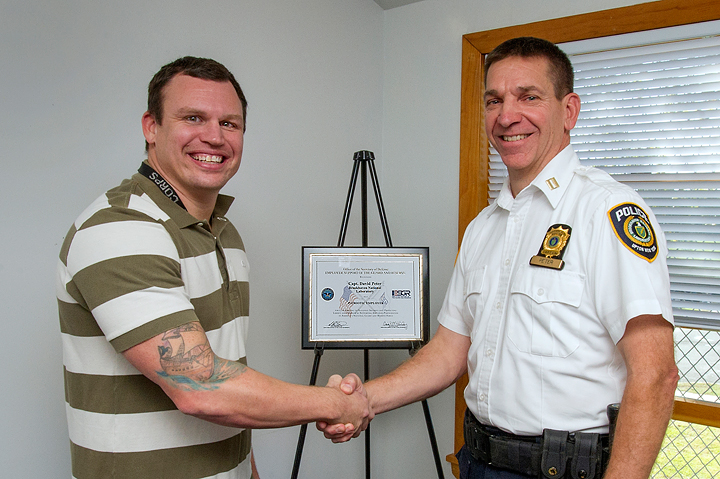 Michael Chierico, New York Chair for ESGR, came to the Lab to present Peter with the award. “ESGR is a lead Defense Department program that operates within the Office of the Secretary of Defense for Reserve Affairs. Its primary mission is to promote cooperation and understanding between employers and their National Guard and Reserve employees,” said Chierico. “David Peter’s hard work and support is a perfect example of how we can help our veterans through outreach and educational opportunities. I applaud David for his service to our nation, first as a U. S. Marine and now as a certifying official helping other veterans.”

“The award means a lot to me,” added Peter. “But, helping my fellow veterans and police officers is really the heart of the program. It is my personal goal to help as many veterans as I can through these programs.”