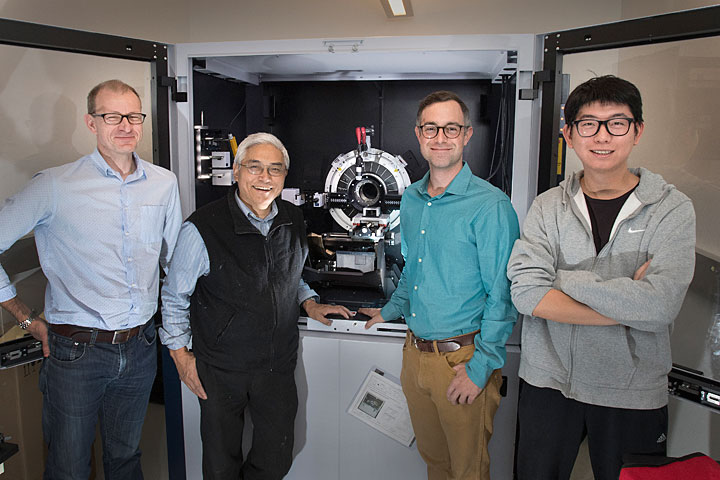 Superconductors carry electricity with perfect efficiency, unlike the inevitable waste inherent in traditional conductors like copper. But that perfection comes at the price of extreme cold—even so-called high-temperature superconductivity (HTS) only emerges well below zero degrees Fahrenheit. Discovering the ever-elusive mechanism behind HTS could revolutionize everything from regional power grids to wind turbines.

Now, a collaboration led by the U.S. Department of Energy’s Brookhaven National Laboratory has discovered a surprising breakdown in the electron interactions that may underpin HTS. The scientists found that as superconductivity vanishes at higher temperatures, powerful waves of electrons begin to curiously uncouple and behave independently—like ocean waves splitting and rippling in different directions.

“For the first time, we pinpointed these key electron interactions happening after superconductivity subsides,” said first author and Brookhaven Lab research associate Hu Miao. “The portrait is both stranger and more exciting than we expected, and it offers new ways to understand and potentially exploit these remarkable materials.”

The new study, published November 7 in the journal PNAS, explores the puzzling interplay between two key quantum properties of electrons: spin and charge.

“We know charge and spin lock together and form waves in copper-oxides cooled down to superconducting temperatures,” said study senior author and Brookhaven Lab physicist Mark Dean. “But we didn’t realize that these electron waves persist but seem to uncouple at higher temperatures.” 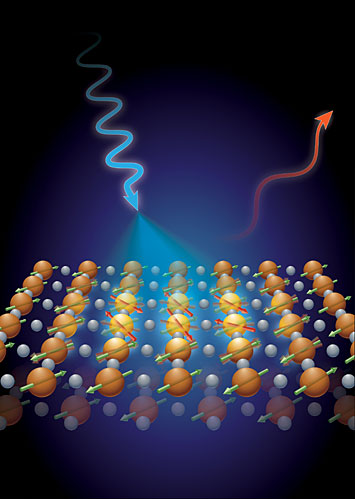 In the RIXS technique, intense x-rays deposit energy into the electron waves of atomically thin layers of high-temperature superconductors. The difference in x-ray energy before and after interaction reveals key information about the fundamental behavior of these exciting and mysterious materials.

Scientists at Brookhaven Lab discovered in 1995 that spin and charge can lock together and form spatially modulated “stripes” at low temperatures in some HTS materials. Other materials, however, feature correlated electron charges rolling through as charge-density waves that appear to ignore spin entirely. Deepening the HTS mystery, charge and spin can also abandon independence and link together.

“The role of these ‘stripes’ and correlated waves in high-temperature superconductivity is hotly debated,” Miao said. “Some elements may be essential or just a small piece of the larger puzzle. We needed a clearer picture of electron activity across temperatures, particularly the fleeting signals at warmer temperatures.”

Imagine knowing the precise chemical structure of ice, for example, but having no idea what happens as it transforms into liquid or vapor. With these copper-oxide superconductors, or cuprates, there is comparable mystery, but hidden within much more complex materials. Still, the scientists essentially needed to take a freezing-cold sample and meticulously warm it to track exactly how its properties change.

“We can’t have any structural abnormalities or errant atoms in these cuprates—they must be perfect,” Dean said. “Genda is among the best in the world at creating these materials, and we’re fortunate to have his talent so close at hand.”

At low temperatures, the electron signals are powerful and easily detected, which is part of why their discovery happened decades ago. To tease out the more elusive signals at higher temperatures, the team needed unprecedented sensitivity.

“We turned to the European Synchrotron Radiation Facility (ESRF) in France for the key experimental work,” Miao said. “Our colleagues operate a beamline that carefully tunes the x-ray energy to resonate with specific electrons and detect tiny changes in their behavior.”

The team used a technique called resonant inelastic x-ray scattering (RIXS) to track position and charge of the electrons. A focused beam of x-rays strikes the material, deposits some energy, and then bounces off into detectors. Those scattered x-rays carry the signature of the electrons they hit along the way.

As the temperature rose in the samples, causing superconductivity to fade, the coupled waves of charge and spin began to unlock and move independently.

“This indicates that their coupling may bolster the stripe formation, or through some unknown mechanism empower high-temperature superconductivity,” Miao said. “It certainly warrants further exploration across other materials to see how prevalent this phenomenon is. It’s a key insight, certainly, but it’s too soon to say how it may unlock the HTS mechanism.”

“Using new beamlines at NSLS-II, we will have the freedom to rotate the sample and take advantage of significantly better energy resolution,” Dean said. “This will give us a more complete picture of electron correlations throughout the sample. There’s much more discovery to come.”

Additional collaborators on the study include Yingying Peng, Giacomo Ghiringhelli, and Lucio Braicovich of the Politecnico di Milano, who contributed to the x-ray scattering, as well as José Lorenzana of the University of Rome, Götz Seibold of the Institute for Physics in Cottbus, Germany, and Robert Konik of Brookhaven Lab, who all contributed to the theory work.

This research was funded by DOE’s Office of Science through Brookhaven Lab’s Center for Emergent Superconductivity.