The following press release originally appeared on the Deutsches Elektronen Synchroton (DESY) website. It describes a new achievement: creating a focused x-ray beam smaller than 7 nanometers using multilayer Laue lenses. The lenses were fabricated by researchers at DESY, and to ensure their focusing performance, required the most advanced x-ray microscopy instrumentation, which was available at the hard x-ray nanoprobe beamline 3-ID at the National Synchrotron Light Source II (NSLS-II) — a U.S. Department of Energy Office of Science user facility located at Brookhaven National Laboratory. In collaboration with the NSLS-II scientists, the team verified the focus size of the lens. For more information about Brookhaven Lab's role in this research, contact Ricarda Laasch, 631-344-8458, laasch@bnl.gov.

The silica shell of the diatom Actinoptychus senarius, measuring only 0.1 mm across, is revealed in fine detail in this X-ray hologram recorded at 5000-fold magnification with the new lenses. The lenses focused an X-ray beam to a spot of approximately eight nanometres diameter – smaller than a single virus – which then expanded to illuminate the diatom and form the hologram. Credit: DESY/AWI, Andrew Morgan/Saša Bajt/Henry Chapman/Christian Hamm

Scientists at DESY have developed novel lenses that enable X-ray microscopy with record resolution in the nanometre regime. Using new materials, the research team led by DESY scientist Saša Bajt from the Center for Free-Electron Laser Science (CFEL) has perfected the design of specialised X-ray optics and achieved a focus spot size with a diameter of less than ten nanometres. A nanometre is a millionths of a millimetre and is smaller than most virus particles. The researchers report their work in the journal Light: Science and Applications. They successfully used their lenses to image samples of marine plankton.

Modern particle accelerators provide ultra-bright and high-quality X-ray beams. The short wavelength and the penetrating nature of X-rays are ideal for the microscopic investigation of complex materials. However, taking full advantage of these properties requires highly efficient and almost perfect optics in the X-ray regime. Despite extensive efforts worldwide this turned out to be more difficult than expected, and achieving an X-ray microscope that can resolve features smaller than 10 nm is still a big challenge.

Due to their unique properties X-rays cannot be focused as easily as visible light. One way is to use specialised X-ray optics called multilayer Laue lenses (MLLs). These lenses consist of alternating layers of two different materials with nanometre thickness. They are prepared with a coating process called sputter deposition. In contrast to conventional optics, MLLs do not refract light but work by diffracting the incident X-rays in a way that concentrates the beam on a small spot. To achieve this, the layer thickness of the materials has to be precisely controlled. The layers must gradually change in thickness and orientation throughout the lens. The focus size is proportional to the smallest layer thickness in the MLL structure.

To meet the required precision, Bajt’s team combined a novel fabrication process with detailed understanding of the material properties, which often vary with layer thickness. The new lenses consist of over 10 000 alternating layers of a new material combination, tungsten carbide and silicon carbide. “The selection of the right material pair was critical for the success,” emphasises Bajt. “It does not exclude other material combinations but it is definitely the best we know now.”

To focus an X-ray beam in the vertical and horizontal directions it has to pass through two perpendicularly oriented lenses. By using this set-up, a spot size of 8.4 nanometres by 6.8 nanometres was measured at the Hard X-ray Nanoprobe experimental station at the National Synchrotron Light Source NSLS II at Brookhaven National Laboratory in the U.S. The focus size is what sets the resolution of the X-ray microscope. The resolution of the new lenses is about five times better than achievable with typical state-of-the-art lenses. 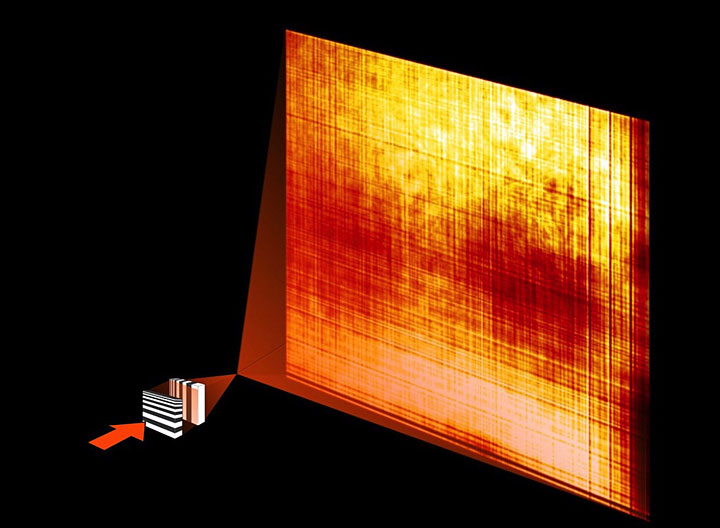 For imaging investigations, two perpendicularly oriented lenses focus the X-ray beam into a small spot. The object under investigation (not shown here) can then be placed into the optical path and its image recorded by the detector. Credit: DESY, Andrew Morgan/Saša Bajt

“We produced the world's smallest X-ray focus using high efficiency lenses,” says Bajt. Due to their penetrating nature, X-rays would usually pass straight through the lens materials. Such rays obviously do not contribute to the focus, and thus a long-term goal has been to produce lens structures that enhance the interaction with X-rays, to direct a high fraction into the focus. The new lenses have an efficiency of more than 80 per cent. This high efficiency is achieved with the layered structures that make up the lens and which act like an artificial crystal to diffract X-rays in a controlled way.

The high efficiency achieved here demonstrates the very high level of control in the production of the necessary nanometre structures. This accuracy allows projection imaging over a large range of magnifications as demonstrated by tests of the novel lenses. At beamline P11 of DESY's X-ray source PETRA III the scientists produced high-resolution holograms of Acantharea, single-celled Radiolaria belonging to marine plankton and the only organisms known to form skeletons from the mineral strontium sulfate (SrSO4) or celestite.

Bajt's team has also used the new lenses to image the biomineralized shells of marine planktonic diatoms. These single-celled organisms have intricate shells, which are highly complex stable but also lightweight constructions. They consist of nanostructured silica, which was observed in two dimensional analyses with electron microscopes before. Most likely because of this structuring, the strength of the silica is exceptionally high – ten times higher than that of construction steel – although it is produced under low temperature and pressure conditions.

“We hope that the novel X-ray optics will soon make it possible to image these nanostructures in 3D. This will enable us to model and understand the high mechanical performance of these shells and help us to develop new, environmentally friendly and high performance materials,” says Christian Hamm from the Alfred Wegener Institute, Helmholtz Centre for Polar and Marine Research (AWI), who provided the samples and is a co-author of this study.

The new lenses can be used in a wide range of applications including nano-resolution imaging and spectroscopy. “These MLLs open up new and exciting opportunities in X-ray science. They can be designed for different energies and used with coherent sources, such as X-ray free-electron lasers,” says Bajt. “This great achievement would not have been possible without a wonderful team with expertise in X-ray optics and theory, nanofabrication, material science, data processing and instrumentation. Since we now know how to optimise the lens design, our work paves the way to ultimately reach the goal of one nanometre resolution in X-ray microscopy.”