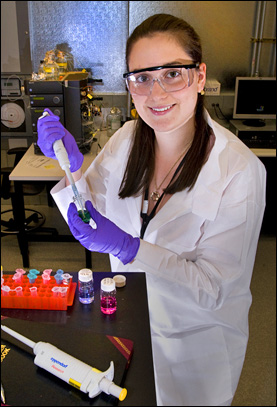 Growing up in the local community of Mastic Beach, Erica Palma, an Office of Educational Programs (OEP) summer student, has spent much of her life “right down the road” from Brookhaven. For most of that time, however, she did not give the Lab much thought.

“Even though I was around the Lab, I didn’t really know what Brookhaven was,” said Palma with a sheepish grin. “It was kind of a big mystery.”

Palma would soon become somewhat of an expert on the Lab, however. At the encouragement of her school principal, Palma participated in OEP’s high school research program, which she described as being a “great experience.” She then returned to BNL for the Summer Undergraduate Laboratory Internship (SULI) program for two consecutive years. According to Palma, the mysterious Lab turned out to be a “very cool” place.

Her affinity for BNL is not surprising. Palma’s mother is a nurse, and her father, a career medical technologist, always took his daughter to “Bring-Your-Child-to-Work Day.” Science and research were strong elements in her family life, but Palma’s personal struggle with a heart condition was also important in determining her current interests.

“When I was at the doctor, I would always ask questions about the tests and equipment,” Palma recalled. “It made me feel special to understand what was happening.”

Though Palma is healthy now, her experience left her with a passion to help make medical equipment better at diagnosing and treating human illness. To that end, Palma studies biomedical engineering at Stony Brook University and will spend the summer in Oleg Gang’s soft and biological nanomaterials lab in the Center for Functional Nanomaterials, continuing work that she began last year.

The main idea of her project is to improve a technique developed by Gang’s team in which scientists use DNA strands, the genetic code of life, and gold nanoparticles to construct three-dimensional crystalline structures, whose special properties might have applications ranging from medical bio-sensing to more efficient energy generation.

“These structures usually require a coating of fifty to sixty DNA strands per particle,” she said. “I’m working on using only one strand per connection.”

While this simple refinement would allow for more “interesting, complicated structures,” the “coolest part” for Palma is the fact that DNA can be used as a tool in non-organic projects.

Aside from biomedical engineering, Palma’s other passion is science education. She is considering attending law school to become an advocate for science, especially with regard to genetic research and gene patenting; in the meantime, she promotes science literacy on a smaller scale by volunteering with OEP’s Summer Sundays program.

“We need people with a background in science out there defending it against misguided critics,” Palma said. “It is vital that scientific advancements find their way to the general public.”

Regardless of her post-undergraduate path, Palma would like to remain involved with Brookhaven, particularly in terms of community outreach and education.

“We have brilliant scientists at our doorstep,” she said, speaking of her hometown of Mastic Beach. “People should know about that.”

More information about the SULI program and the other internships offered through BNL's Office of Educational Programs.