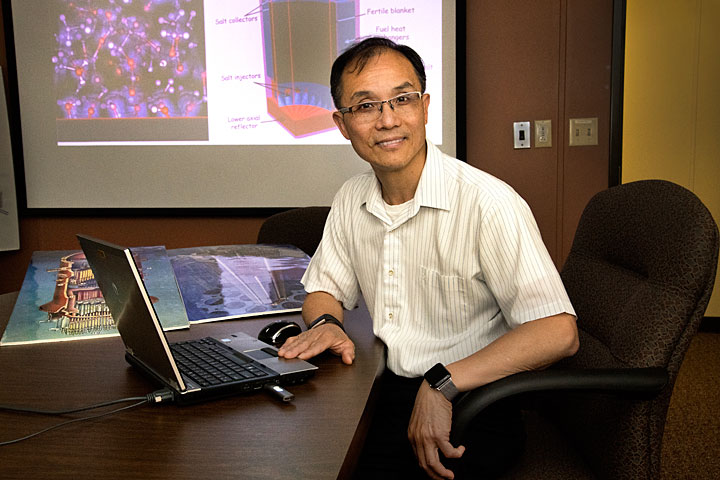 By 2050, the worldwide demand for energy is projected to double as a result of population growth and economic development. Nuclear power could help meet this future need. However, designing new nuclear reactor systems will not only require advances in materials science and energy technologies but also improvements in the areas of safety, security, and environmental impact. In particular, compared to today’s reactors, these systems will have to operate with enhanced safety and reliability, use natural resources more efficiently, minimize waste production, and reduce proliferation risk—all in a way that is cost-competitive with other means of energy generation. Building these requirements into reactor designs will require significant collaboration among the international community.

In January 2000, the U.S. Department of Energy’s (DOE) Office of Nuclear Energy convened a group of senior governmental representatives from nine countries to begin discussing the cooperative research and development of next- generation nuclear energy systems. This group, called the Generation IV International Forum (GIF), was established to address key technical issues associated with designing, building, and operating advanced reactors. Since that time, five more countries have become members. GIF expects that the first Generation IV systems will be deployed commercially beginning in the 2030s.

In its research and development roadmap, GIF identified four goals to advance nuclear energy systems to this fourth generation: sustainability, safety and reliability, economic competitiveness, and proliferation resistance and physical protection. Following the expert evaluation of more than 100 reactor concepts that were assessed against these goals, GIF selected six reactor designs for further consideration. To help define design guidelines and develop methodologies for evaluating the performance of the candidate systems, GIF formed three working groups: Risk and Safety, Economics, and Proliferation Resistance and Physical Protection (PR&PP). 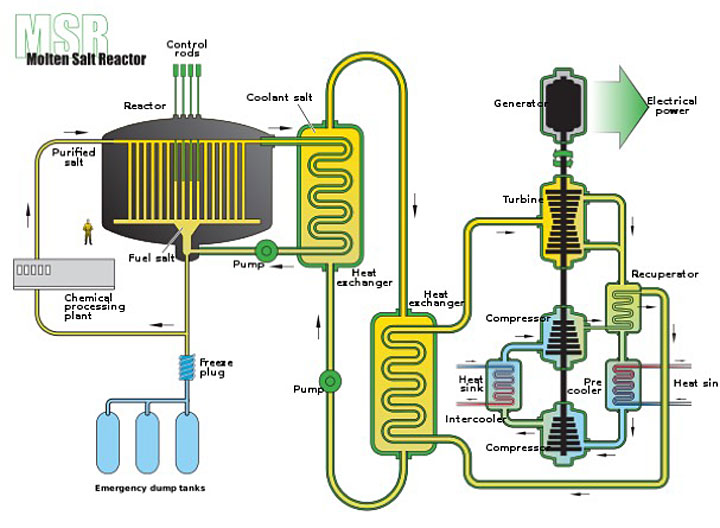 The six reactor systems that GIF selected for further research and development are based on a variety of reactor, energy conversion, and fuel cycle technologies, and range in size from very small to very large. Above is a schematic for the molten-salt reactor, one of the six candidate systems being considered. This kind of reactor uses a mixture of molten salts—salts that become liquid at elevated temperatures—as the primary coolant to remove heat from the reactor's core, where the fuel is processed, and carry it to electrical generators. In June, the DOE awarded Brookhaven Lab funding to lead a new Energy Frontier Research Center, named Molten Salts in Extreme Environments, which will explore the properties and behaviors of these materials. The other five reactors are the gas-cooled fast reactor, lead-cooled fast reactor, sodium-cooled fast reactor, supercritical water-cooled reactor, and very-high-temperature reactor.

Lap-Yan Cheng—a nuclear engineer at DOE’s Brookhaven National Laboratory—has been elected to co-chair the PR&PP Working Group. The other co-chairs are Giacomo Cojazzi, a project leader at the European Commission Joint Research Centre in Ispra, Italy, and Per Peterson, professor and William and Jean McCallum Floyd Endowed Chair in Engineering at the University of California, Berkeley. Cheng assumed the role in May following a nomination and voting process among the individual members from each country.

“Assuming a leadership role in the PR&PP Working Group will allow Brookhaven Lab to actively engage with the international community in achieving the goal of nonproliferation while continuing with the development and deployment of nuclear energy,” said Cheng.

The PR&PP Working Group comprises more than 20 engineers, scientists, and state regulators from 11 countries and organizations: Canada, China, the European Atomic Energy Community (Euratom), France, the International Atomic Energy Agency, Japan, the Nuclear Energy Agency, the Republic of Korea, Russia, South Africa, and the United States. The group is helping ensure that the systems are designed to impede technology misuse—specifically, the diversion or production of nuclear material for weapons purposes—and to offer enhanced safeguards against theft and acts of terrorism or sabotage that disrupt operations. Demonstrations and case studies based on different risk scenarios are being used to analyze the systems’ robustness against such threats. Measures to evaluate system response include the technical difficulty, cost, and time associated with overcoming proliferation barriers; the probability and consequences of failing to neutralize a threat; and the amount of resources (e.g., number of personnel) associated with safeguards and physical protection. 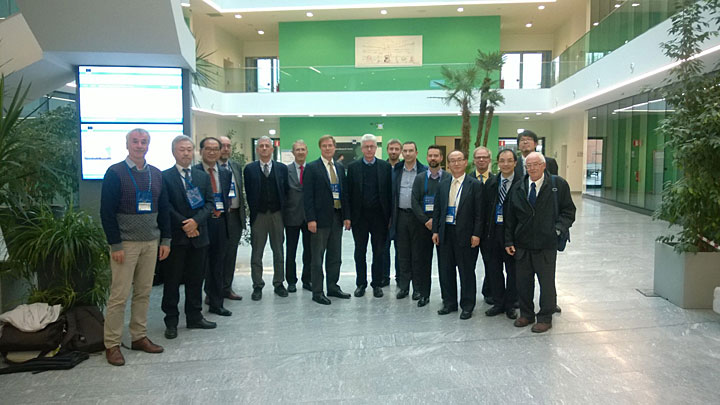 Cheng (third from right) and the members of the Proliferation Resistance and Physical Protection Working Group at the 2017 annual meeting at the Joint Research Centre of the European Commission in Ispra, Italy. This year's meeting will be held in October in Paris.

By considering these measures, system designers can identify and incorporate design options that will improve PR&PP performance. Such improvements will strengthen the assurance that the systems provide a very unattractive route for malicious activity. For example, designers can eliminate safety equipment that requires frequent intervention by nuclear power plant operators and replace this equipment with passive systems that rely on the laws of nature (i.e., the natural behavior of the reactor materials and design). In effect, this limited access to equipment would reduce the potential of an incident occurring. Similarly, designers can minimize the number of entry and exit points for fuel transfer between system elements to enhance the containment of nuclear material.

“Proliferation resistance and physical protection are essential to the success of the overall Generation IV program, as these areas affect all the other goals that the reactors are being designed to address—higher safety, improved fuel efficiency, and reduced waste production,” said William Horak, chair of Brookhaven Lab’s Nuclear Science and Technology Department. “Brookhaven Lab has been an advanced reactor lab since its founding in 1947, and Lap-Yan’s appointment shows our continued leadership role in the development of advanced reactors. With his extensive experience working on Brookhaven’s former High-Flux Beam Reactor and collaborating with the Nuclear Regulatory Commission on advanced reactor designs, Lap-Yan is an excellent choice to co-lead the PR&PP Working Group.”

Cheng holds bachelor’s, master’s, and doctoral degrees in nuclear engineering from Rensselaer Polytechnic Institute. Since joining Brookhaven Lab in 1988, he has served in a variety of leadership roles—including lead of the Nuclear Systems and Structural Analysis Group—and provided technical support to various DOE research reactor programs. In the area of proliferation risk analysis, Cheng has evaluated reactor systems and fuel cycle options for DOE’s Office of Nuclear Energy and National Nuclear Security Administration, developed software tools and models for evaluating proliferation risk and conducting emergency planning and accident management studies, and engaged industry in the development of safeguards by design. Most recently, he was invited as one of two representatives from the PR&PP Working Group to conduct a weeklong training and outreach workshop in Beijing, China. This workshop, which took place from July 9 to 13, focused on the methodologies that have been developed so far by all three GIF Working Groups.

“With the increasing number of developing countries exploring the idea of introducing nuclear into the energy supply mix, it is important for the international community to recognize the four goals identified by GIF to advance nuclear energy systems,” said Cheng. “I look forward to co-chairing the PR&PP Working Group and continuing the mission of engaging other stakeholders in the nuclear energy community.”