Summer Students at Brookhaven Lab: They're Here—and More Are Coming! 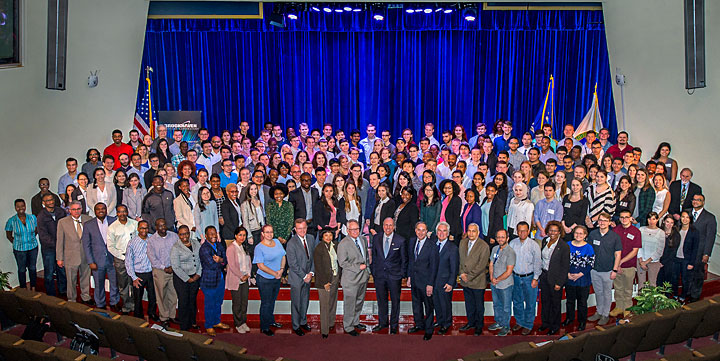 Forget about grilling and white shoes after Memorial Day. The students and professors visiting the U.S. Department of Energy's (DOE) Brookhaven National Laboratory this summer are firing up experiments and laptops, and donning white lab coats—ready for research, networking, and some fun too.

Approximately 250 students and professors from science, technology, engineering, and math (STEM) programs at universities in 33 U.S. states arrived at Brookhaven Lab on June 4. Hosted by the Lab's Office of Educational Programs, the participants are now with mentors "in the field"—some in labs and offices, others literally in fields on site, studying tick populations, small mammals, box turtles, pollinators, and their habitats.

DOE Under Secretary for Science Paul Dabbar was among the dignitaries who welcomed students during an orientation meeting on June 4.

"In the world, there are visionaries who come up with the ideas and there are doers who put those visions into execution. We at the national labs…are the people who combine both the vision and the doing. That's what we do and that's how we make a difference," Dabbar said.

Dabbar also told students about the Energy Department's commitment to innovation and highlighted scientific advances happening across the country in the both public and private sectors.

"The American people give us—and allow you—the opportunity, as part of their hard earned money, to make amazing discoveries that can make a tremendous impact on the world. That's why you're here, why we're here, every day," Dabbar added.

While giving the summer guests an overview of Brookhaven, its major facilities, and its research efforts, Lab Director Doon Gibbs said, "Science is about passion. It's about doing what you love. It's about understanding something that you don't understand and taking the next step. We are delighted for you to do all that here."

DOE Brookhaven Site Office Manager Bob Gordon then told the summer-program participants, "You might do research in the biological sciences or at the National Synchrotron Light Source II or the Relativistic Heavy Ion Collider. It's going to be exciting, and I can guarantee you that."

OEP Manager Ken White said, "As you join us today you've become collaborators. You're researchers and are now part of an extraordinary team."

Summertime STEM for Many More Students

The college participants who arrived June 4 will pursue research projects, partnered with mentors across the Brookhaven Lab site. Some will collect data on their own, others will analyze data from the massive stores at Brookhaven, including some produced at the DOE Office of Science Users Facilities such as the Relativistic Heavy Ion Collider, National Synchrotron Light Source II, and Center for Functional Nanomaterials. Others will produce new computer code and work with components for current and future research at Brookhaven and beyond.

And since the first cohort of this year's summer students arrived at Brookhaven, more have since joined them—with others on their way in the weeks to come.

Strong Support for Students and STEM

The students and professors that spend their summers at Brookhaven Lab are hosted by the Office of Educational Programs and mentors in research groups across the site. Some participants receive support from departments at Brookhaven. Most are supported by:
The U.S. Department of Energy's Office of Workforce Development for Teachers and Scientists programs

On June 11, 12 students arrived on site for the annual Nuclear Chemistry Summer School. Students joining in this workforce development program will grow expertise in nuclear science for future nuclear research, the nuclear power industry, and nuclear medicine—using atoms with unstable nuclei that emit energy that can be directed to diagnose diseases, treat them, and help save lives. The Nuclear Chemistry Summer School is supported by the U.S. Department of Energy Office of Science.

One week after the Nuclear Chemistry Summer School started, on June 18, Brookhaven welcomed 24 more graduate-level students and early career professionals for the two-week-long Nuclear Nonproliferation, Safeguards, and Security course. These participants learn about the threats of nuclear proliferation and terrorism, focusing on the Treaty on the Non-Proliferation of Nuclear Weapons, its verification mechanism, and the International Atomic Energy Agency safeguards system. Participants with technical and policy backgrounds learn about developing policy and challenges associated with implementing policy in the field.

More than 60 students from Long Island for the High School Research Program on July 9. That same day, another 25 students who recently completed ninth grade began the STEM-Prep Summer Institute for students who are members of minority groups underrepresented in the sciences. And approximately 300 students—from grades four through 12—are joining in Summer Science Explorations with courses on physics, structural biology, astrophysics, energy, and scientific computing and coding.

On July 23, 20 undergraduate students will arrive on site for the three-week pilot SciComp Skills Building Internship Program on scientific computing. They will write custom software, translate mathematical formulas into code, and document their efforts for future peer review. This program is funded by the National Science Foundation's Louis Stokes Alliance for Minority Participation.

These summer programs all follow the Lab's annual Open Space Stewardship Program celebration held on May 30. The Open Space Stewardship Program was designed for students in kindergarten up to the 12th grade to help local park managers and other land stewards manage their properties, with the students as “citizen scientists,” learning about the scientific process while going out to the field to collect useful data. During the celebration, more than 120 students came together to share results from their science projects with approximately 200 parents, educators, and environmental experts.

"This is what we do for a wide range of students. We connect diverse students with leading scientific experts doing some of the world's most important work," OEP Manager White said. "Introducing them to the world-class researchers and facilities at Brookhaven helps them see an exciting future using science to solve some of the most pressing problems for society to make the world a better place."