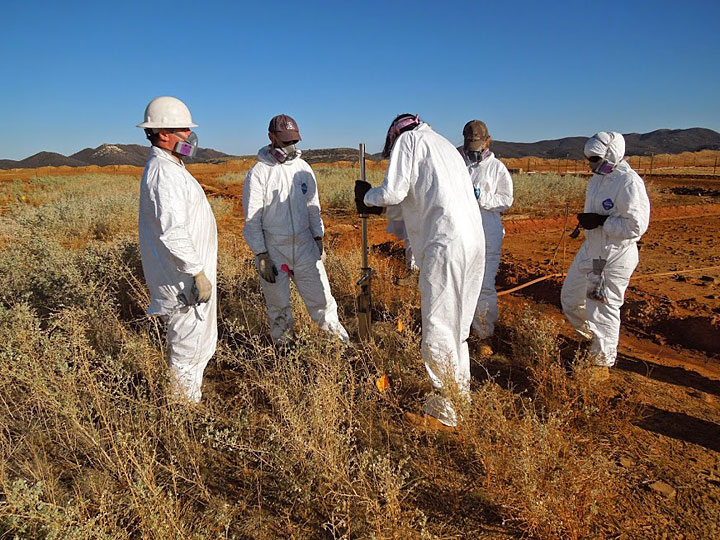 Scientists from the University of Arizona collect plant samples from the mine tailings at the Iron King Mine and Humboldt Smelter Superfund site in central Arizona. X-ray studies at Brookhaven Lab helped reveal how these plants' roots lock up toxic forms of arsenic in the soil. (Credit: Jon Chorover)

Working in collaboration with scientists at the U.S. Department of Energy’s Brookhaven National Laboratory and SLAC National Accelerator Laboratory, researchers at the University of Arizona have identified details of how certain plants scavenge and accumulate pollutants in contaminated soil. Their work revealed that plant roots effectively “lock up” toxic arsenic found loose in mine tailings—piles of crushed rock, fluid, and soil left behind after the extraction of minerals and metals. The research shows that this strategy of using plants to stabilize pollutants, called phytostabilization, could even be used in arid areas where plants require more watering, because the plant root activity alters the pollutants to forms that are unlikely to leach into groundwater.

The Arizona based researchers were particularly concerned with exploring phytostabilization strategies for mining regions in the southwestern U.S., where tailings can contain high levels of arsenic, a contaminant that has toxic effects on humans and animals. In the arid environment with low levels of vegetation, wind and water erosion can carry arsenic and other metal pollutants to neighboring communities.

Planting contaminated soil or mine tailings with specific vegetation that can tolerate toxic conditions and also physically immobilize pollutants could prevent these contaminants from being carried off. However, the scientists were concerned that the additional water needed for plants to grow in such arid environments might cause the pollutants to leach into groundwater, as has happened in Southeast Asia.

“Phytostabilization is a very attractive ‘green’ technology, but we wanted to know whether using phytostabilization had any effect on arsenic in the mine tailings on the molecular scale, and if so, whether there were any implications for public health,” said University of Arizona researcher Jon Chorover, senior author of the study published in Environmental Science & Technology. “We wanted to determine the contribution of plant root chemical activity to the long-term phytostabilization of arsenic in the mine tailings in this particular arid climate.”

Chorover and his research team selected a plant known as Prosopis juliflora, a small tree that naturally grows in arsenic-enriched environments in Mexico, South America, and the Caribbean. The team planted P. juliflora in the mine tailings at the Iron King Mine and Humboldt Smelter Superfund site in central Arizona. 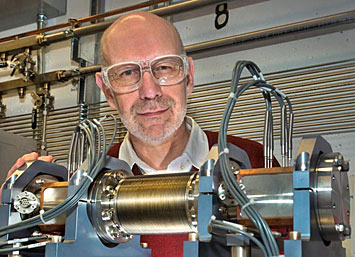 They then brought their plant root samples to the Submicron Resolution X-ray Spectroscopy (SRX) beamline at the National Synchrotron Light Source II (NSLS-II)—a DOE Office of Science User Facility at Brookhaven Lab that produces some of the brightest x-ray beams in the world. They worked with lead beamline scientist Juergen Thieme to examine the distribution of different elements within their samples using a technique called x-ray fluorescence (XRF) microscopy.

X-ray fluorescence microscopy works by shining high energy x-rays onto a sample—in this case, the plant roots. As the x-rays interact with the atoms, they displace electrons, resulting in the emission of fluorescent light, Thieme explained. Each specific element in the sample (arsenic, iron, sulfur, etc.) emits light of a different wavelength. By scanning their sample surface with x-ray beams and tracking the fluorescent light emitted, the scientists created a 2D map of the elements within each root.

The researchers then used a technique called x-ray absorption near edge structure spectroscopy (XANES) to learn more about the chemical states of the individual elements. These chemical states are specific forms of an element defined by their oxidation state, which describes the loss of electrons of an atom in a chemical compound.

The same section of a P. juliflora plant root revealed by a light-microscope (a) with dotted lines delineating the parts of the root, and XRF imaging (b-f). The color intensity corresponds to the fluorescence signal produced by each chemical component in the sample: potassium (b), sulfur (c), iron (d) and two different arsenic species (e and f). (Credit: SLAC)

The team also studied mine tailings that had not been treated with plants. Chorover explained that it was critical for the team to investigate the effect of the plant roots on the arsenic species in the mine tailings, because a change in environment—for example, the introduction of plant roots to previously barren mine tailings—can alter a chemical’s mobility and toxicity.

A change in speciation 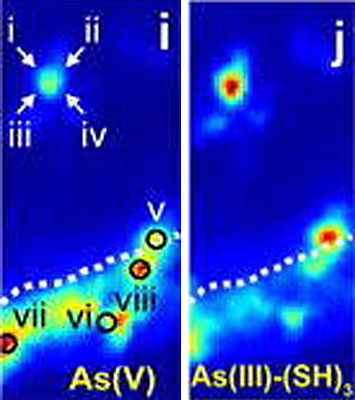 Produced at Brookhaven National Laboratory using XRF imaging, these high resolution images show two different species of arsenic bound to two distinct molecular environments in the root zone—the species in (i) is typically fixed to the surface of the root and the species in (j) is contained within the root.

The scientists found that, prior to the introduction of P. juliflora, the mine tailings contained only one dominant species of arsenic—the same species that leaches into groundwater in Southeast Asia. In similar arid environments, wind and water erosion can easily carry the pollutant to surrounding communities.

However, after trees had been planted in the mine tailings, the biological action of the roots changed the arsenic speciation in the area of soil known as the root zone, or the soil region directly influenced by root activity. In treated tailings, the scientists found two different species of arsenic coexisting in close proximity, bound into two distinct molecular environments in the root zone.

“The SRX beamline provided us with a very high spatial resolution, which we needed to probe the plant root surface as well as the plants’ interior,” Chorover said.

“These two closely associated species of arsenic show that the biological and chemical processes in the root zone can alter arsenic speciation to new forms,” said Chorover. “After phytostabilization, the two arsenic species will bind to either the surface or the interior of the root, and therefore, arsenic is no longer free in the soil and cannot leach into groundwater.

“This work suggests that that this phytostabilization method does not introduce any increased risks to human health.”

Now the team is interested in understanding what happens to these arsenic species when the plant roots die and decay. Chorover said they plan to return to the SRX beamline to study the soil samples of decaying roots.

Thieme will be eager to help them. “Chorover and his team were some of the first scientists to use the SRX beamline,” he said. “At the time, we were learning about the beamline as well, so I’m very happy to see that the researchers got the results they wanted.”

The work at SRX was complemented by similar studies at SLAC’s Stanford Synchrotron Radiation Lightsource (SSRL), another DOE Office of Science user facility. The research was funded by DOE’s Office of Science.