Retiree Mike Reynolds Takes a Voyage ‘Around the Americas’

Brookhaven Lab retiree Mike Reynolds is serving as a scientist on a yearlong expedition aboard a 65-foot, single mast, steel-hulled yacht that is sailing around the Americas. The voyage of Ocean Watch began in Seattle around Memorial Day and will take the yacht and its crew around North America — down the east coast of the Americas, around Cape Horn, up the west coast of the Americas, and back to Seattle sometime next year. 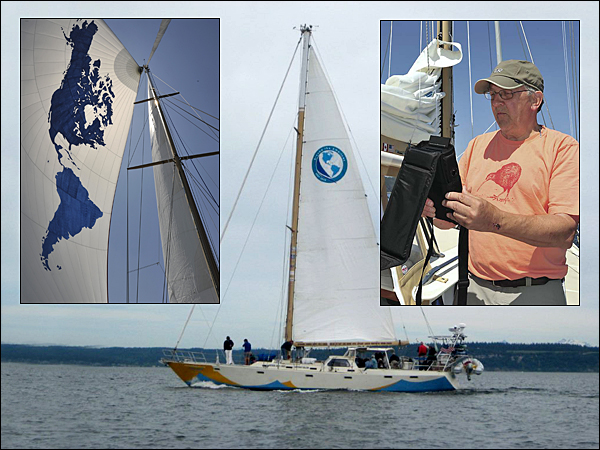 Scientist Michael Reynolds (top, right) shoots the sun with the sun photometer supplied by the Joint Institute for the Study of the Atmosphere and Ocean (JISAO) while aboard Ocean Watch (background).

Its mission is to bring awareness to people about the conditions of our oceans, and one of the jobs for the expedition scientist is to meet with local people along the way to discuss the scientific program. Ocean Watch is currently in Alaska, and the crew expects to be in the New York area sometime in September. In the meantime, you can follow their progress and read about this great adventure on their daily blog with pictures at www.aroundtheamericas.org.