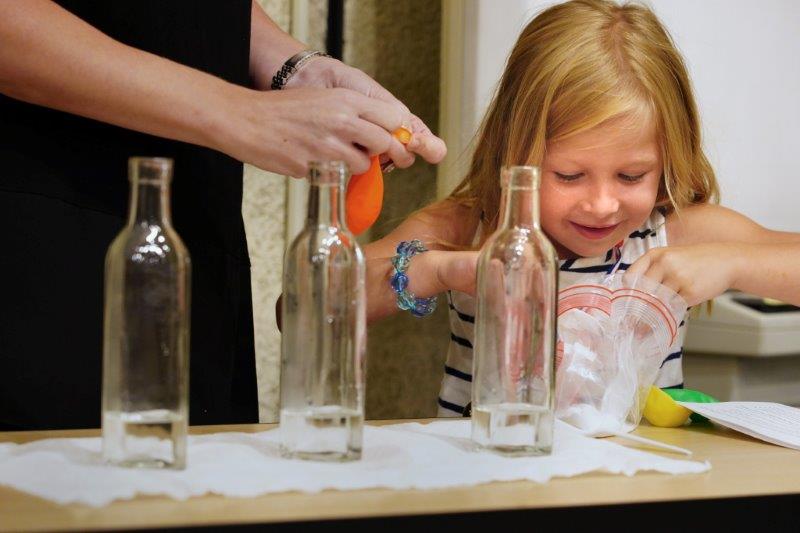 Alka Seltzer Lava Lamp, How Old Are You on Other Planets, Finding a Super Cleaning Machine in Your Kitchen, and Mars Exploration: Spirit & Opportunity Rovers. No, these are not the names of cutting-edge experiments at Brookhaven Lab’s world-class facilities, but some of the projects featured at the third annual Brookhaven Employees’ Recreation Association (BERA) Summer Camp Science Fair held on Aug. 15 in Berkner.

Sponsored by Brookhaven Women in Science (BWIS), the Science Fair invites girls and boys, from five to 11 years old, to submit a science project of their choosing. The goal of the fair is to increase students’ interest in science, technology, engineering, and math (STEM), as well as help them develop speaking skills and independent work skills.

“We tell the parents to let the children do all the work themselves,” said fair organizer Firoza Zanoni, Manager of the Environment, Safety, and Health Representatives Group in the Safety & Health Services Division and a BWIS member. “Some were a little shy, but they got through it. You could see the pride on their faces.”

Students had to speak in front of fair attendees and explain their projects, as well as answer questions by a camp counselor with a background in science education. Over 30 people attended this year’s event, including parents, BWIS members, and interested Lab staff.

Parents, who are also employees across the Lab, expressed their appreciation for the event, with one going so far as to say her daughter now looks forward to participating in her own school science fair.

Students received a certificate of participation, a gold medal to wear around their necks, and a special prize package. The children then enjoyed a luncheon with their parents.

If you have questions about the BERA Summer Camp Science Fair, please contact Zanoni at Ext. 4532 or firoza@bnl.gov. To learn more about BWIS, visit www.bnl.gov/bwis.