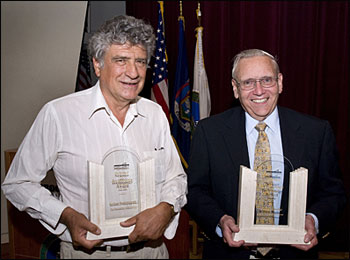 Serban Protopopescu of the Physics Department (left) and F. William Studier of the Biology Department (right), the 2009 winners of the Brookhaven Lab Science & Technology Awards.

At the annual Employee Recognition Ceremony held June 22 in Berkner Hall, 13 BNLers were honored with the Lab’s highest awards: five received the Brookhaven Award, five, the Engineering & Computing Award, and two, the Science & Technology Award. Candidates are selected for the exceptional nature and difficulty level of their contributions as well as the benefit of the contributions to the Laboratory.

Also congratulated were 146 Spotlight Award winners, cited for extending extraordinary efforts in response to the needs of their departments or divisions.

Doon Gibbs, Deputy Laboratory Director for Science & Technology, presented the 2009 Science & Technology Awards, which recognize distinguished contributions to the Laboratory’s science and technology mission over one or more years. Contributions may be in any scientific or technical discipline other than engineering and computing. Each awardee is presented with $5,000.

Nominations for the Science & Technology Award are made by organization heads. A Lab-wide selection committee for this award consists of the Associate Laboratory Directors for scientific programs who recommend award recipients to the Laboratory Director for final approval. The committee members evaluate each nominee with respect to three criteria: the exceptional nature of the employee’s contributions, the difficulty level of the contributions, and their benefit to BNL.

Serban Protopopescu, a physicist in the Physics Department who joined BNL in 1972, is cited for his world-class contributions to high energy physics over the past three decades. In particular, he is recognized for his work on the D0 Experiment at the Tevatron collider at Fermi National Accelerator Laboratory. A founding member of the D0 collaboration, Protopopescu led the team that designed the early analysis software for this experiment and is credited as one of the very few people whose contributions were most crucial to the D0 detector’s role in discovering the top quark at the Tevatron in 1995. The top quark discovery is recognized as one of the most significant in the last two decades of high energy physics research.

From 1996 to 2000, Protopopescu was the chief architect of new software for the D0 experiment’s upgrade, and for the next two years led the D0 simulation, ready for Run II, which began in 2002. His main interest for the Run II data focused on tau lepton identification and physics processes such as the first observation of a Z boson to tau-lepton pair decay at a hadron collider, and the search for the Higgs boson to tau-lepton pair decays. Protopopescu is now recognized as one of the world’s leading experts on tau-lepton identification in hadron colliders. In 2008, he joined BNL’s ATLAS team to continue studying final states with tau leptons at the Large Hadron Collider in Geneva, Switzerland.

F. William Studier, a senior biophysicist in the Biology Department who joined BNL in 1964, is recognized for his outstanding contributions in characterizing the life cycle of the bacterial virus bacteriophage T7 and its interaction with its host bacteria, Escherichia coli, and for developing tools for the expression of proteins and the analysis of proteins and nucleic acids. Studier’s methodical genetic and physical analyses provided the basis for a sustained investigation of T7 genetics and biochemistry that has resulted in many important observations and over 90 peer-reviewed scientific papers that largely define the T7 system. His publications are among those most highly cited in biological research, and his work has stimulated the research of many others.

Studier’s idea of casting flat gels that enable the simultaneous analysis of many proteins or nucleic acids revolutionized molecular biology research and was a forerunner of the modern, high-throughput methods that have enabled a systems approach to biological research today. His system for the expression of proteins was critical to the success of structural genomics research and is probably the most widely used expression system for proteins today. Royalties from his patents continue to be a critical factor for developing new research programs at BNL, not only in the life sciences, but Laboratory wide. He is currently developing new ways to work with proteins that are difficult to clone and express.