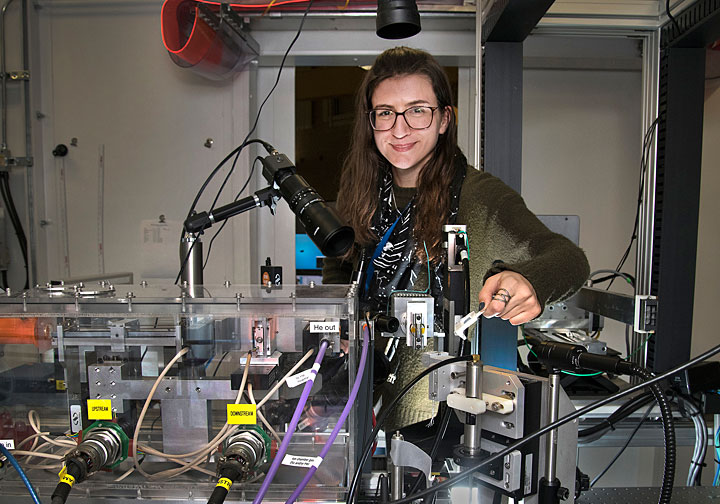 Catherine Trewhella, a recent graduate from the University of Massachusetts, Amherst, and current intern at the U.S. Department of Energy’s (DOE) Brookhaven National Laboratory, is taking a microscopic look at rocks at the National Synchrotron Light Source II (NSLS-II), a DOE Office of Science user facility. Her research will help prepare scientists for analyzing samples brought back from outer space, specifically Mars.

Trewhella is currently interning as a part of Brookhaven Lab’s Office of Educational Programs’ Supplemental Undergraduate Research Program (SURP). Over the course of the fall, she has been using NSLS-II’s Submicron Resolution X-ray Spectroscopy (SRX) beamline to map out the chemical make-up of terrestrial analogs for Martian samples.

“They’re terrestrial rocks,” she said. “But what makes them worth the closer look is researchers believe they’re similar to rock formations expected on Mars.” These x-ray fluorescence images (XRF) will therefore help scientists better understand what they are seeing when studying Martian samples.

Scientists plan to bring back rock samples from Mars in titanium tubes that will protect them from the Earth’s atmosphere, however the titanium blocks any XRF measurements. To prepare for this, Trewhella has been testing the Earth samples with tubes of alternative materials to see if the samples could be transferred to these. This would allow x-ray measurements to be taken while keeping the samples safe.

The rock samples are scanned across a very small x-ray focus, created by the SRX beamline. The focus spot has a size ten times smaller than the diameter of a human hair, allowing for very high spatial resolution. Each scan covers an area of a given sample rock that’s less than half the size of a fingernail. Using the results of the scans, Trewhella can make a highly detailed map showing exactly how chemical elements like calcium or iron are distributed in the sample.

“X-rays at a known energy hit the sample causing electrons in the sample’s atoms to be displaced,” said Trewhella. “Another electron then falls in to fill the space left by the displaced electron, and to do this and remain stable, the electron must give off the excess energy as an x-ray that is picked up by the detector.”

“The most interesting part of planetary research is how it brings every other science together.”

“The energy of this emitted x-ray is unique to each element, Trewhella explained. “We can repeat this process at multiple spots in a chosen area of the sample. Using this data, we can plot the distribution of elements within the sample to make an x-ray fluorescence map.”

It is the perfect research project for Trewhella, whose longtime fascination with rocks goes back to growing up in Peekskill, New York. She enthusiastically collected them from the surrounding trails and woods. She didn’t consider turning her love for rocks into serious study, however, until her junior year at UMass, when she decided to switch from a major in classics to geology.

Trewhella made the decision after finishing her classics major two years early: either pick up a new major or give up two more years of scholarships. Choosing geology specifically though was more of a whim. “I thought, I’ll pick geology, try the introduction courses, see if I still like it,” she said. “And then I loved it.”

Now Trewhella is putting her studies to use under the supervision of her mentor, Juergen Thieme, who built the SRX beamline and is now Science Coordinator for the Imaging and Microscopy Program at NSLS-II.

Trewhella has been interning at the beamline since June, first as an intern under the DOE’s Science Undergraduate Laboratory Internship Program (SULI), funded by the Office of Science, Office for Workforce Development for Teachers and Scientists. Over the summer she characterized rock samples from NASA’s Jet Propulsion Laboratory. This fall, under SURP, she put her focus into mapping the characteristics of the Gunflint Formation, a 1.8 billion year old sample provided by Stony Brook University. In the spring, she will come back to SRX to continue her work on terrestrial analogs.

After Brookhaven, Trewhella plans to go to graduate school and continue in the field of planetary research.

“The most interesting part of planetary research is how it brings every other science together,” said Trewhella. “I have a geology degree, my mentor is a physicist, and the beamline scientists that I work with are mechanical engineers, chemists, and biologists.”

The diversity of scientific fields available at the lab is also what interested her in working at Brookhaven in the first place.

“I’m able to learn from all these amazing people across all of these disciplines and each experiment is unique,” said Trewhella. “You learn something new each day.”

The National Synchrotron Light Source-II and Brookhaven National Laboratory are supported by the Office of Science of the U.S. Department of Energy.  The Office of Science is the single largest supporter of basic research in the physical sciences in the United States, and is working to address some of the most pressing challenges of our time.  For more information, please visit science.energy.gov.