The third annual meeting of the Interdisciplinary Consortium for Research and Educational Access in Science and Engineering (INCREASE) stressed the importance of amplifying the participation of faculty and students from minority-serving institutions. Held July 15-17 at the National Synchrotron Light Source (NSLS), the workshop attracted 11 faculty members from 10 institutions to learn how to transform themselves and their students into successful synchrotron users. 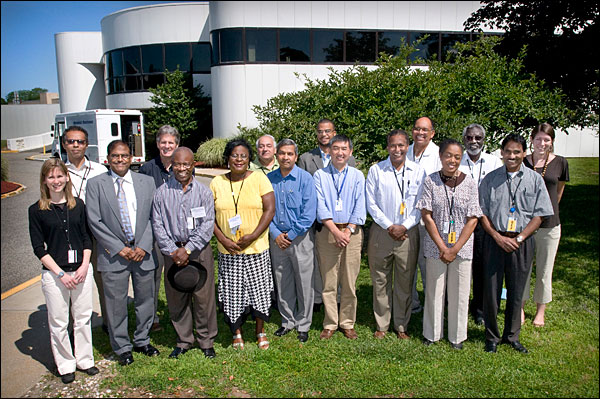 Participants in the 2009 INCREASE meeting

Formed at Brookhaven in 2007, INCREASE aims to promote research in Historically Black Colleges and Universities (HBCUs) and other minority-serving institutions (MSIs) at national user facilities – in particular, the NSLS – as well as to facilitate education and research training, especially for African Americans, Hispanics, Native Americans, and women.

Participants in the workshop, organized by the NSLS and Brookhaven’s Office of Educational Programs (OEP), were welcomed by Laboratory Director Sam Aronson and NSLS Chair Chi-Chang Kao, who stressed the importance of reaching out to potential minority scientists early in their careers.

“The best way to attract future employees is to start them off here as students,” Kao told the workshop participants. “The key is the faculty. Your research will guide the students at your institutions and get them interested in what we do here.”

During the three-day workshop, the participants – some of whom had never been to the NSLS – received basic information about synchrotron mechanics, specific NSLS beamlines and techniques, and future plans for science at NSLS-II. In addition, NSLS staff members led a session on writing successful beam time proposals, and Stony Brook University physicist Laszlo Mihaly discussed the university’s new Master of Science in Instrumentation Program.

At the end of the first day, the professors gave brief presentations about their specific research area, ranging from thermoelectric materials under extreme pressures and temperatures to advanced X-ray detectors. Based on their backgrounds, they then participated in various hands-on, technique-focused activities on the experimental floor. These activities, which highlighted everything from x-ray fluorescence microscopy to magnetic circular dichroism, helped identify what beamlines and techniques would best fit the participants’ research needs. The professors presented their research proposal ideas on the last day of the workshop.

The next steps for the consortium are to finalize its bylaws and seek independent funding to carry out collaborative research or educational outreach, said Delaware State University professor Gabriel Gwanmesia, a founding member of INCREASE.

“The key issue we're focusing on now is finding a theme to bond us,” Gwanmesia told the participants on the first day. “As a consortium, we've identified numerous research problems we can tackle and educational efforts to embark upon. Now we have to take these common problems and work toward solving them.”