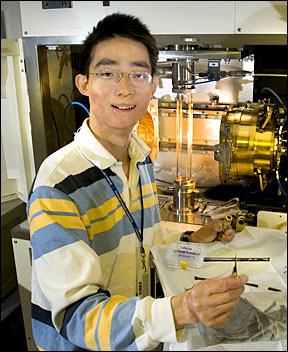 Jinsheng Wen is working toward an energy solution, one superconductor at a time. A Stony Brook graduate student and West Hempstead resident, he is completing his Ph.D. thesis at Brookhaven National Laboratory (BNL) as a member of the Lab’s Condensed Matter Physics and Materials Science Department and Neutron Scattering Group.

Wen studies superconductors — materials that conduct electricity and allow electrons to flow without any resistance so no energy is lost. With 100 percent efficiency, superconductors are a promising piece in solving the nation’s energy challenges.

While superconducting materials are energy efficient, they are only superconducting when cooled below a specific “critical temperature,” close to absolute zero (approximately 273-Celsius degrees below zero). Although the critical temperatures for some superconductors have been raised to approximately 140-Celsius degrees below zero, maintaining such a cold environment is not so energy efficient or commercially viable.

“The ultimate goal for researchers working on superconductors is to understand why they are superconducting — and then raise their critical temperatures closer to room temperature, therefore not requiring so much refrigeration,” Wen explained. “BNL is an ideal place for my research — it has experts on growing superconductors and experts who know how and what to study with the superconductors.”

Wen begins his research by “growing” superconducting crystals that he thinks might yield interesting results. He grinds raw materials — mostly metallic alloys — into powders, mixes them together, and then exposes them to intense amounts of heat, with some temperatures as high as 2,000 degrees Celsius. It can sometimes take several days and several tries to get high-quality superconducting crystals.

Wen’s final superconducting products are black and cylindrical, a few millimeters in diameter and as long as 20 centimeters. Wen uses a tool called a magnetometer to check that the sample’s composition is correct, and then a microscope to confirm that the mixtures have successfully crystallized and are now made up of a consistent, repeating arrangement of atoms.

Once Wen and his fellow team members have grown their superconductors, they travel to one of two neutron sources to test their samples: the Center for Neutron Research at the National Institute of Standards and Technology in Maryland or the High Flux Isotope Reactor at Oak Ridge National Laboratory in Tennessee.

Like the High Flux Beam Reactor at Brookhaven Lab, which was permanently closed in 1999, these sources bombard samples with beams of charge-less, subatomic neutrons to probe the superconducting crystals — a process called neutron scattering. Researchers believe that magnetism plays a large role in superconductivity so neutrons are used because they are sensitive to magnetism and can penetrate the sample crystals.

Wen is on his way to becoming a noted scientist in his quest to better understand superconductors, even though he hasn’t yet earned a Ph.D. He has authored and coauthored 15 papers since joining Brookhaven Lab, some of which have been published in Science, various Nature journals, Physical Review Letters, Applied Physics Letters, Physical Review B, and the Journal of Crystal Growth. He also received the “Margaret C. Etter Student Lecturer Award” earlier this year for his work to control a material’s electrical properties using magnetic fields.

“We still have a long way to go before fully understanding superconductors and designing superconductors suitable for room-temperature use, but we are making progress step by step,” Wen said. “I believe that, together with all people working in this field, these problems will be eventually solved — and as long as there is hope, there is fun.”