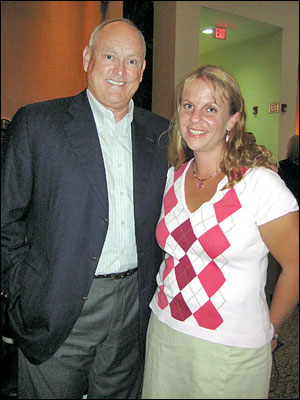 Michelle Wilinski can’t count the number of times she’s been at bat. But she’ll never forget her experience at the plate last month, when she got to stare down eight-time Major League Baseball All-Star and Hall of Fame pitcher Nolan Ryan.

Wilinski, an electrical engineer at the Collider-Accelerator Department at BNL, has been a fixture in the Brookhaven Employees’ Recreation Association (BERA) Softball League throughout her nine years at the lab. She recently won a Southwest Airlines contest to play ball with Ryan at the National Baseball Hall of Fame and Museum in Cooperstown, New York.

Wilinski participated in a variety of sports growing up, and remains active at Brookhaven, where she runs, swims, and plays volleyball. Although she stopped playing softball after elementary school, she quickly took the sport back up after coming to Brookhaven.

Wilinski is not only heavily involved with the BERA Softball League, playing second base and outfield and acting on the executive board as the site’s webmaster, she is also part of a local Brookhaven Town team. When asked how long she intended to play softball, Wilinski replied, “As long as I can. Forever.”

While browsing the Southwest Airlines website for flight information in July, she came across an ad for its annual “Play Ball with Nolan Ryan” contest. She ventured to click on the ad, and decided to enter the contest.

“You had to write a 150-word-or-less essay on why they should pick you to come play softball with him,” Wilinski said.

Knowing the stakes were high, what inspiring topic formed the basis of this crucial essay?

“I wrote about how I love the color pink, and about my pink glove and pink shoes,” Wilinski said.

She then offered Southwest a wager: if she didn’t strike out against Nolan Ryan, the airline would have to paint one of its aircrafts entirely pink, and if she did, she would sing her own version of “Take Me Out to the Ball Game” for Ryan and the other contestants.

Evidently, it was an offer Southwest could not refuse. Within the first week of August, Wilinski received notification that out of some 1,500 entries, she was one of 10 to win the contest.

At the end of August, Wilinski and her dad, both hardcore Mets fans, traveled to Cooperstown for the weekend, along with the other winners and their guests. Although the game was scheduled for Saturday morning at the iconic Doubleday Field just outside the Hall of Fame, heavy rain forced the players indoors, and they later played on a makeshift diamond set up on a soccer field.

When the game did start, Ryan stayed on the mound, pitching for both the “All Star” Southwest employee team and the “Flyer” contestant team. Ryan held back, Wilinski said, using a smooth and relaxed underhand throw, thus giving the other players a chance to hit in a game that could have otherwise been a total shutout — for both teams.

Nevertheless, as Wilinski said, “you could tell he still had the competitive flair in his eyes.”

After the game, the contestants ate dinner in the hall’s plaque gallery, and conducted a small ceremony where everyone was (strongly) encouraged to read their essays in front of Nolan Ryan. Some contestants were clearly nervous about addressing the stellar athlete so directly, admitting that they probably would have written something less personal if they had known they would be reading their essays aloud in front of everyone. As for Wilinski, she was given the “opportunity” to grace the audience with a performance of her special anthem. That night, the contestants sat down with Ryan for some informal but engaging conversation.

“It was fun enough to play, but hearing about life and times in Major League Baseball was really cool,” Wilinski said.

As for the wager itself, Wilinski was able to bat successfully against Ryan, fulfilling her end of the bargain. Plans for a pink aircraft, however, are still up in the air.

Take me out to the ballgame
Pick me for the Flyers crowd
Buy me a flight on a Southwest jet
Cooperstown NY is where the game’s at
We will root, root, root for the Flyers
If they don’t win it’s a shame
For it’s Ryan’s one, two, three strikes I’m out
At the old ballgame.