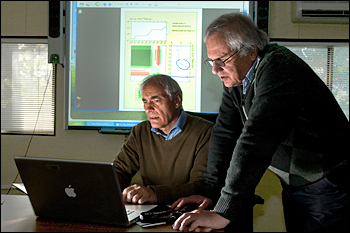 A collaboration between Brookhaven and Idaho national laboratories will improve the way scientists model the inner workings of nuclear reactors. The Department of Energy's Office of Science is funding the research to develop more accurate reactor simulations, leading to better, more efficient reactors.

Scientists will use data from experiments already performed at nuclear facilities around the world to test and calibrate their models of nuclear reactions at the atomic level. This will allow them to integrate data from the meter scale with outcomes on the scale of the femtometer (1 quadrillionth of a meter). Brookhaven scientists Michal Herman, Pavel Oblozinsky, and Marco Pigni of the National Nuclear Data Center (NNDC) will use advanced modeling at the nuclear physics (femtometer) level, while Idaho researchers will take charge at the meter scale. Feeding off each other, the two groups will test the simulations they develop against information from actual experiments.

"The project represents a real novelty but also considerable challenges in how to achieve direct coupling of two vastly different worlds: microscopic nuclear physics and bulk reactor integral experiments," said former NNDC head Oblozinsky. "What we are talking about is the direct link between these two worlds, with a possibility to establish microscopic nuclear physics parameters by analyzing integral experiments. This has never been done before, not in such a direct manner. This is the most exciting aspect of the project. We believe that the current level of microscopic nuclear reaction physics modeling, combined with huge progress in computer technology, makes this direct coupling possible, but it remains to be shown how it would actually work."

The NNDC will make use of the advanced nuclear reaction code system EMPIRE to model interaction of neutrons with nuclei of interest to the reaction community. EMPIRE collects all relevant nuclear reaction mechanisms and procedures needed for creating evaluated files along with the respective covariances and sensitivity matrices. Herman said that these unique features, together with the evaluation expertise available at the NNDC, provide for a perfect match to the nuclear data adjustment capabilities existing at Idaho National Laboratory.

The project, which began on October 1, received funding of $1.05 million over three years through the American Recovery and Reinvestment Act.