Characterization of materials under the extreme conditions of next-generation energy systems, nuclear systems in particular, was the focus of a workshop hosted by BNL on September 25-26. 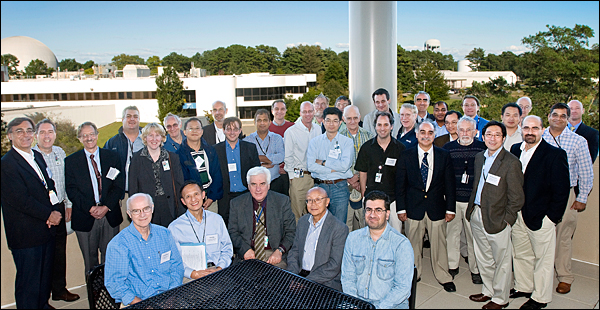 Participants at Brookhaven’s workshop on materials under extreme conditions.

Recognizing the key role of materials throughout the spectrum of energy systems, the Department of Energy (DOE) organized a series of workshops addressing research needs. These workshops formed the springboard for addressing more specific issues and identifying future directions.

The BNL workshop focused on the advancements made in recent years in the characterization techniques using light source x-ray beams and electron beams. It also highlighted advances in modeling and simulation, such as atomistic simulations of material behavior, multi-scale modeling, and molecular dynamics.

Organized by BNL’s Energy Sciences Technology Department (EST) and the National Synchrotron Light Source (NSLS)/Joint Photon Sciences Institute, the workshop’s primary goal was to establish a bridge between extreme-conditions material science and advances in material characterization and computational techniques, including the role of next-generation light sources, such as the NSLS-II currently under construction at BNL.

When completed in 2015, Brookhaven’s NSLS-II will deliver world-leading intensity and brightness, producing x-rays more than 10,000 times brighter than the current NSLS. Workshop discussions explored the potential of x-ray beam parameters offered by next- generation light sources and neutron sources in the characterization of materials under the extreme conditions of new energy systems. Brookhaven has a long history of energy systems research and has advanced capabilities in characterization techniques using the NSLS and Center for Functional Nanomaterials, as well as advanced computing with its Blue Gene supercomputer.

According to workshop organizer Nick Simos of EST and NSLS-II, the workshop succeeded in initiating an in-depth dialogue between scientists addressing the material issues and their potential performance limitations with scientists developing advanced characterization methods using the potential rendered by the light source x-ray beams, electron beams and other techniques.

“We need to know more about the performance of materials when they are operating at the extreme states of radiation, temperature, pressure and aggressively corrosive environments which characterize the next-generation energy systems,“ Simos said. “Excellent presentations were made during the workshop by renowned scientists in the fields of materials, characterization techniques and modeling, leading to very stimulating discussions.”

Super-alloys, composite materials and nano-structured coatings are expected to play a central role in the advancement of energy systems that require increased material performance under conditions that are more intense and extreme than those experienced thus far.

“A number of scientific groups are linked to the issue of materials under extreme conditions,” Simos pointed out, “but they each have a unique vantage point -- the material scientists are studying, in particular, nuclear materials and nuclear fuels, the experimentalists are developing characterization techniques using light source x-rays and electron beams, and the computational/modeling scientists are working to link the scales from atomic level to continuum and understand the mechanics of the processes taking place when materials are pushed to extremes of temperature, radiation, and pressure.”