Eden Figueroa is into making 'beautiful connections' with quantum networks

As a new joint appointee at the U.S. Department of Energy’s Brookhaven National Laboratory, Eden Figueroa is getting accustomed to traversing between his roles within the Lab’s Computational Science Initiative (CSI) and Instrumentation Division while also overseeing the Quantum Information Technology group as a tenured professor at Stony Brook University. For most, working in so many places at once can be stressful and disconnecting. However, for Figueroa, who has a long-held fascination with quantum mechanics, navigating complicated connections serves to inspire the quantum networks currently being configured and tested by his team.

Out of the Cold

Figueroa started his journey in Mexico as a physicist and experimentalist, whose interest in quantum mechanics led him to the University of Konstanz (Germany) and the Institute for Quantum Information Science at the University of Calgary (Canada) to study under A.I. Lvovsky. While pursuing his doctorate, Figueroa started building quantum memories, atom-filled glass cells that are stimulated by lasers to control the atomic states within them or as he put it, “to make photons talk and tell their secrets to atoms.”

One of the most characterizing aspects of operating quantum hardware is the need to keep it cold—very cold; 2 K (-456°F) cold. The cold keeps particles as stationary as possible, enabling measurements to be taken. Figueroa realized that working at these super-cold temperatures was a limitation. When he asked his professor if a quantum memory could operate at room temperature, he was told: “I don’t think so, but prove me wrong.” That command was the impetus for Figueroa spending nearly three years working on various prototypes until he helped devise an operable room-temperature quantum memory, which has since been expanded into integrated, portable “shoebox-size” memories that serve a core role in how his team is building a quantum network.

As a baseline definition, a quantum network transfers quantum data bits, or qubits, over distances using standard telecommunications fibers. However, unlike the usual exchange of 0 and 1 bits, this data transfer is based on laws of quantum mechanics. At the subatomic (quantum) level, particles can behave much differently than they do at states commonly understood by classical physics—even exist in two places at once. This “quantum entanglement” where particles share properties despite being separated by distance is an elemental part of the quantum network experiments in progress at Brookhaven Lab, Stony Brook University, and (soon) Yale University.

“Particles in the quantum-mechanics-entangled world share things even if they’re thousands of miles apart,” Figueroa said. “If you’ve seen Star Trek, it’s like when Kirk calls in, ‘Beam me up.’ We can use quantum entanglement to teleport information from one area to another at a speed that can’t be matched in classical systems.”

To test this effort, Figueroa and other Lab scientists initially employed existing communications fiber lines, measuring roughly two kilometers (km), or a little more than a mile, between buildings on the Brookhaven Lab campus to build a small quantum network that shares entanglement. Notably, this ongoing work brings together all of Figueroa’s research connections. CSI manages the quantum computing aspects of the network, as well as designs the networks and links, while Brookhaven’s Instrumentation group provides the entanglement photons and other experimental infrastructure and capabilities. Some the testbed’s detection components have been developed in the Lab’s Physics Department. Figueroa’s laboratory at Stony Brook University supplies the quantum memory that processes the information. A direct “twin” of that lab also is being built within the Instrumentation building at Brookhaven. The goal is to have an operating quantum network within a few years.

In another quantum entanglement experiment, Figueroa and his team will “transmit photons into free space,” basically from one telescope to another in its direct line. Figueroa explain this ongoing work will be a linchpin in moving toward a more expansive quantum network. 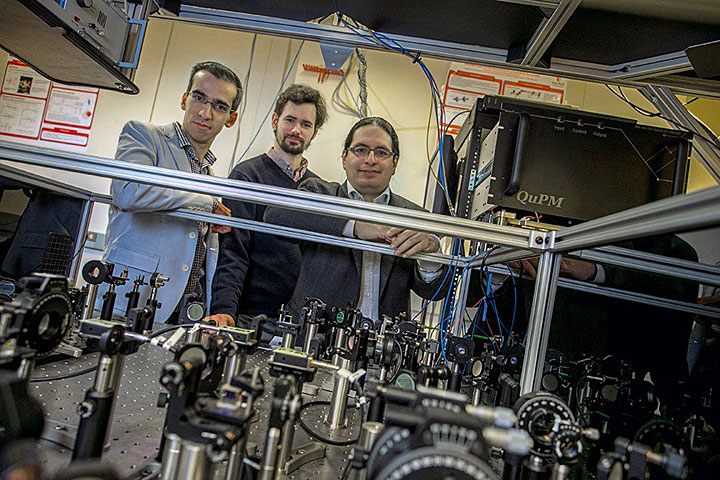 (From left): Mehdi Namazi, Mael Flament, and Figueroa with a quantum memory of their own design and other quantum networking equipment. Years ago, Figueroa's professor challenged him to design a quantum memory that could operate at room temperature. Photo courtesy of Stony Brook University.

“If we can demonstrate that it works on two experiments set over 20 km, we can put more in connections,” he said. “Right now, we want to build a network between Brookhaven, Stony Brook, and then to Yale and create links from one campus to another until we’re actively sharing photons between the three campuses. Maybe five years from now, we can scale the system we use and put more connections to cover New York State, Connecticut, the whole Northeast region.”

Figueroa also credited the newly launched Northeast Quantum Systems center, known as NEQsys, for facilitating the connection to Yale University, noting that Brookhaven Lab has provided a regional nexus for researchers with common interests in quantum information science (QIS) that otherwise might not exist.

“The connection between Brookhaven and Stony Brook is sort of a natural marriage,” he explained. “However, NEQsys provides a beautiful connection to research at, for example, Yale and MIT that I wouldn’t necessarily have interacted with. Now, with Yale, we are connected and starting an expansion of our research. This would not be possible without NEQsys.”

Why Now? Why Not?

Figueroa acknowledged serendipity in the timing of these efforts. He has seen an uptick in interest in quantum from entities such as DOE and noted that leadership at Brookhaven Lab and Stony Brook University have been offering both the facilities and opportunities to launch the fundamental experiments needed to amplify QIS research.

“We’ve encountered the challenge: first, building quantum memory at room temperature. Now, we can build it,” he explained. “Now, we have labs running in different places to launch a quantum network. These ideas only move forward when you are willing to put resources into solving the problem. The approaches really converged at Brookhaven. Kerstin [Kleese van Dam, CSI Director], Dimitri [Katramatos, CSI scientist], Gabriella [Carini, Instrumentation, Deputy Division Head], and Andrei [Nomerotski, Physicist], all have been supportive, getting what we need to create this quantum infrastructure.”

Mostly, Figueroa is excited and impressed at the level of commitment he has seen from everyone involved as the experiments grow. The technical steps and scaling require the brain power of lead scientists, information technology engineers, graduate students, and more. Figueroa added that the rising attention on QIS also is generating increased interest among students.

“They know that in quantum research, there’s some things happening that have never been done, and they can see the hardware, infrastructure, and grants seeking research. It’s very powerful, and the conditions are right. For students, it’s magical,” he said.

Training the next generation is another ingredient in the plan to amplify QIS, especially in New York. According to Figueroa, Stony Brook University will begin offering courses in fall 2019 toward a master’s degree program with emphasis on QIS. The courses will offer immersion into quantum for engineers or scientists that he hopes will feed startups in quantum technology. By including Brookhaven Lab as a resource partner, Figueroa envisions “empowering a Long-Island-centric quantum program.”

Figueroa readily acknowledged that there is a full-fledged competitive race to be first in the world to host a scalable quantum network that shares entanglement. Already, China has an almost 10-year lead on its quantum investments with Europe not too far behind. Still, with many challenges remaining to unlock a functioning quantum network, Figueroa oozes with optimism when he peers at the research landscape.

“Why not be the ones to do it?” he asked. “We can be leading this area. It’s the right time to get it done. If we make it happen, it would be a lead story in The New York Times. It would be game-changing for the community. I am pumped about it. We can get something beautiful done.”

Read more about Eden Figueroa’s groundbreaking work in a few of his favorite papers: