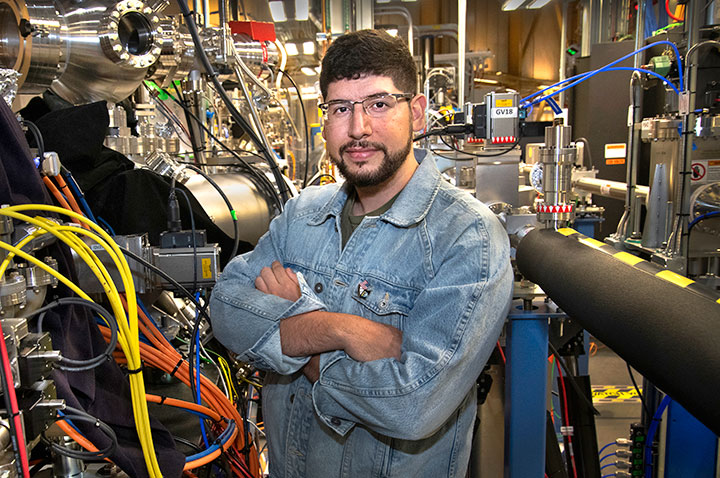 Guerrero says he is grateful for the programs offered by the Lab’s Office of Educational Programs (OEP), and that he owes his own scientific mentors and OEP staff for inspiring him toward a career that has him excited about his future.

Guerrero, who first came to the Lab in 2013 as a participant in the Lab’s C-STEP winter program (New York State Collegiate Science & Technology Entry Program), has now volunteered to be a mentor for Brookhaven’s summer interns.

“I’ll get the chance to be the mentor instead of the mentee,” said Guerrero. “I am eager to pay it forward and provide the same positive experience for young students embarking on their science and engineering careers.”

During the C-STEP program, Guerrero spent two weeks interacting with scientists, attending lectures, and getting tours of the Lab’s facilities. He also met Ryan Tappero, a scientist at the National Synchrotron Light Source (NSLS)—the predecessor of NSLS-II, a current DOE Office of Science User Facility at Brookhaven.

“I was mesmerized by the science being done at the Lab, particularly at NSLS,” said Guerrero. “By the time C-STEP ended I knew I wanted to be part of the experiments being conducted there and was happy when Ryan agreed to be my mentor the following summer.”

Guerrero participated in DOE’S Science Undergraduate Laboratory Internships (SULI) program in the summer of 2013 and worked with Tappero.

“That was a dream come true,” Guerrero said. “I was working at a world-class institution with extraordinary scientists. I was a member of the ‘on-the-fly’ fluorescence microspectroscopy project. I worked with Ryan on a small motion control project that included the development of PyEPICS-based software, a derivative of Python web programming designed to develop complex scientific applications and help facilitate data analysis. By the end of the summer I had learned how to conduct an experiment from start to finish. I will be forever grateful for the time Ryan spent mentoring me.”

Guerrero returned as a summer intern in 2014 and worked with core controls group at NSLS-II, learning more about the importance of controls during experiments. “This internship was perfectly aligned with my interests,” said Guerrero, who earned his degree in engineering physics from Fordham University.

In February 2016, Guerrero says he realized another dream when he became a full-time employee at NSLS-II. He now works under the direction of Anton Derbenev.

Working at several beamlines, Guerrero is now part of the core controls group that provides hardware and software engineering expertise on various aspects of development, operation, and maintenance of NSLS-II control systems. Guerrero’s primary focus is on equipment protection systems and motion control. “We think first about safety and we work hard to protect all of the components at the beamlines from potential hazards that could cause the experiment to fail,” said Guerrero.

In his spare time, Guerrero, who was born and raised in the Bronx, enjoys traveling, trying ethnic foods, and learning about other cultures.

“I’m planning to work at the Lab for the next 30 or 40 years,” added Guerrero. “I really do feel like I’ve landed my dream job in the best place on earth.”