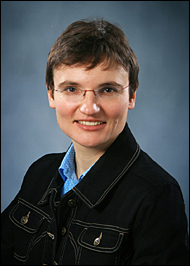 Anna Stasto, a research associate in the Physics Department from 2004 to 2006 and currently a fellow with the RIKEN-BNL Research Center, has received DOE’s Outstanding Junior Investigator Award for her research in nuclear physics. This year, only three researchers in nuclear physics received the honor, which recognizes scientific achievement in the fields of particle and nuclear physics. The $300,000 award supports Stasto’s research for three years.

But good news sometimes comes in twos. Earlier this year, Stasto was awarded an Alfred P. Sloan Research Fellowship in recognition of her research as a young scientist engaged in cutting-edge research. Currently, the Sloan Foundation gives the $50,000 two-year fellowships to a total of 118 researchers in a variety of scientific fields.

“I am happy that my research has been recognized and very honored that I have joined the elite group of scientists who have received these awards,” Stasto said.

Stasto’s research is focused on quantum chromodynamics, a theory that describes the interactions of subatomic particles. In particular, Stasto investigates the properties of the strong interactions of these particles at the limit of high energies and densities. When two strongly interacting particles, such as hadrons, or nuclei at high energy, collide, theorists expect a high number of partons – the building blocks of hadrons – to be involved.

Stasto analyzes how these partons behave and interact when their densities are very large, looking for any novel phenomena that might occur. She is also interested in determining the potential signatures of novel phenomena that may be observed in experiments. This theoretical work is especially relevant for the Relativistic Heavy Ion Collider, as the accelerator collides highly energetic heavy nuclei and protons, and creates a system with a very high number of partons.

In the past, Stasto’s research involved deep-inelastic scattering of electrons on protons, a process that was investigated experimentally at the Hadron Electron Ring Accelerator in Germany. The results of her theoretical analyses have been applied successfully to a variety of subjects in particle physics, including structure-function studies of protons, and the production of heavy quarks and jets of particles. She also studied the mechanisms of the production of neutrinos and the propagation of neutrinos through the Earth.

In the future, Stasto plans to focus her research on theoretical descriptions of the processes that will take place at the Large Hadron Collider at CERN, Swtizerland, which will be the world’s most powerful particle accelerator when it goes online.

Stasto earned a master’s degree in physics at Jagiellonian University in Poland in 1996 and a joint Ph.D. in theoretical physics at the Polish Academy of Science and the University of Durham in the United Kingdom in 1999. In 2005, she earned habilitation in theoretical physics. Habilitation is the highest academic credential given in many European and Asian countries.

After working as a postdoctoral fellow at the University of Florence, Italy, and DESY, a national center for photon science and particle physics research in Hamburg, Germany, Stasto joined BNL as a research associate in the Physics Department in 2006. In 2008, she became Assistant Professor in the Department of Physics at Pennsylvania State University, while retaining a joint RIKEN-BNL position at the Laboratory.