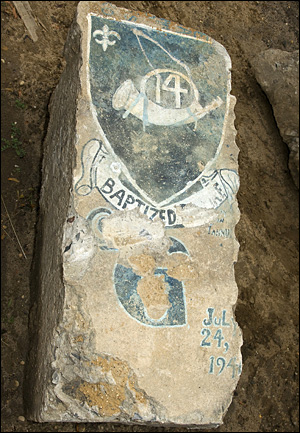 Torcon heavy equipment operator Brian Peters peered through the windshield of his forklift and noticed an unusual sight under the dirt he was excavating to build a trench – a large concrete “boulder” with writing and a drawing inscribed on it. He called Torcon’s Site Quality Assurance Manager Michael Beatrice to take a look. What did they find?

What lay in the newly dug trench was a large rock with a hand-drawn emblem of a bugle, the number 14, the notation “Company G,” and the logo “Baptized by Fire.” The date July 24, 1940-something appeared in the bottom right of the boulder. Unfortunately, the last digit of the year was no longer legible, but it is possible that the date is 1940, meaning the boulder actually predates World War II. The forklift operator noticed a second boulder with hand-painted names, possibly the names of members of Company G during that time period.

Beatrice called NSLS-II Conventional Facilities Director Marty Fallier to come take a look. “Knowing that the Lab was originally the site of Camp Upton, I realized that we had unearthed an artifact from the World War II era,” said Fallier. “So, I called the Lab’s Cultural Resource Manager, Tim Green, to come over and investigate.”

“This find is very interesting and it certainly sparks curiosity,” said Green. “As far as we can tell, this was probably painted on the floor of a warehouse. I notified Don Farnam of the Lab’s Veterans Association because I knew he and his fellow veterans would be interested.”

When Farnam saw the boulder he was amazed that it was in such good shape. “This boulder has been underground for over 70 years, but the writing on it was quite legible,” he said. “The emblem and logo were intriguing, but reading the hand-painted names of those who served our country during the Second World War made this personal for me.” 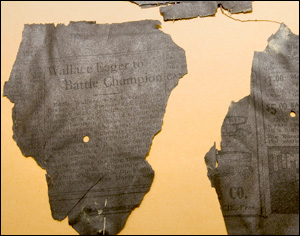 Farnam went home that night and did some research online and found that the blue background represents the infantry, the bugle is the insignia of the infantry dating back to the Civil War, and the fleur-de-lis in the upper left corner signifies service in France during World War I. “It appears that the 14th regiment’s origins date back to 1847,” he said. “The insignia and coat of arms painted on the boulder were adopted in 1926. They were known as the ‘Fighting Fourteenth’ and the ‘Red-Legged Devils’ from Brooklyn. They fought in many battles during the Civil War, including Fredericksburg, Bull Run, and Gettysburg. It’s quite an interesting piece.”

And what about the logo “Baptized by Fire?”

Michael Beatrice shares Farnam’s enthusiasm. He was also awed by the excavated find. “My mom is a history teacher and I absolutely love American history,” said Beatrice. “I did some research and found a story that appeared in the New York Times dated June 2, 1918, indicating that the second wave of American troops sent to France in World War I, including soldiers from Camp Upton, received their last bit of training just behind Allied lines and were subject to enemy fire. This may be why the regiment adopted ‘Baptized by Fire’ as their logo.”

In addition to the inscribed concrete boulder, other items such as old bottles and charred newspapers dating back to 1917 were found at the excavation site. “It’s difficult to read most of the charred newspaper remnants,” said Michael Bromfield, lead construction engineer for the NSLS-II Project team. “But I salvaged what I could and saved the scorched pieces of newspaper in a folder. There are a few sections of the paper that are legible. One is a story about the World Series and another is a story about a boxing match scheduled for October 2, 1917 – Tommy Tuohey versus Ed Wallace.”

Many BNLers know that Camp Upton was the original site of the Laboratory, one of its most famous soldiers being noted songwriter Irving Berlin. Berlin wrote the play “Yip, Yip, Yaphank” and composed many songs including “White Christmas,” but he is primarily known for writing “God Bless America.” Another notable soldier was Sergeant Alvin York, WWI’s most decorated soldier, who briefly trained at Camp Upton.

“The Lab has a rich history and I bet there are many more artifacts buried beneath the site. As the cultural resource manager for the Lab I enjoy being part of its history -- both past and present. For sure, these types of finds keep it interesting,” said Green.