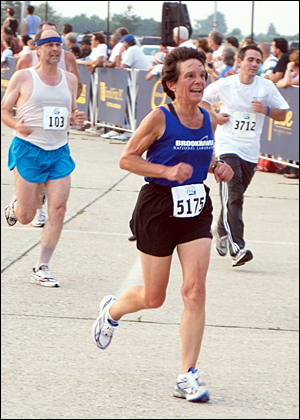 Christine Brakel running the 2008 Marcum & Kliegman Workplace Challenge. This photo was on the cover of the September 2008 edition of “Footnotes,” the Greater Long Island Running Club’s newsletter.

Christine Brakel has a passion for long-distance running. She recently ran in the New York City Marathon and finished the 26.2-mile race in 4:20:33, placing a strong 28th out of 247 finishers in her age group. Not bad, considering it was her first marathon ever.

Despite the fact that Brakel did not run much at all until she was, in her own word, “old,” she is now dedicated to the sport. She runs at least four times a week, and regularly enjoys the extensive network of trails on the Lab’s grounds.

Her first official race was not until 2002, but the experience opened her up to the area’s vibrant running culture.

“Until I started running, I had no idea there were all of these races happening on Long Island,” she said.

Since then, she has been a regular competitor in the region’s long-distance circuit, participating in a number of races, including the Caumsett State Park 50K and the Long Island Half Marathon.

Due to the New York City Marathon’s popularity, runners that do not meet a special set of qualifications are chosen by a lottery system. Brakel had entered the lottery several years ago and was selected for the first time this year.

The wait was worth it.

“Well, let’s put it this way: If I was going to run a marathon, that’s the one I wanted to do,” Brakel said. “It was everything it’s cracked up to be. The people who organize the race and those who support it — they really do a great job.”

Brakel came to the marathon hoping to beat a personal goal of four hours and 30 minutes. Not only did she surpass her own target by 10 minutes, she also finished the race within the qualifying time for the Boston Marathon.

On the day of the race, Brakel said that the extraordinary energy of the New York streets took her mind off any goals she had in mind prior to the marathon.

“Once you step out onto the starting line, there isn’t anything in your mind other than that you’re going to finish,” she said.

Having met the qualifying time for Boston, Brakel now intends to run that race as well, an opportunity she describes as too good to pass up. Incidentally, her plans just recently narrowly avoided a major setback. Brakel came perilously close to an ankle injury when she least expected it -- while crossing a local street on her way home. So far, however, she has a green light to her second marathon in Boston.