On November 23-24, 50 scientists from more than 10 leading climate research centers in Europe and the U.S. met at a “kick-off” workshop at BNL of the new “FASTER” (FAst-physics System TEstbed & Research) project — a new multi-institutional project aimed at accelerating the evaluation and improvement of fast physics processes in climate models.

Leading the FASTER project is Yangang Liu of the Atmospheric Sciences Division (ASD) in BNL’s Environmental Sciences Department (ESD). Liu, together with more than 20 scientists from 10 institutions, will work to accelerate improvements in climate models. The FASTER project is a major effort of the Earth System Modeling Program of DOE’s Office of Biological & Environmental Research (BER) to bridge the research undertaken within BER’s Atmospheric System Research Program to fully utilize the decade of measurements taken by ACRF (ARM Climate Research Facility) scientists. The project is co-managed by Kiran Alapaty of the Atmospheric System Research program and Anjuli Bamzai of the Earth System Modeling program.

“Evaluating model performance and identifying and improving representation of fast processes — especially those related to cloud and precipitation processes — are complex in terms of both science and management,” said Liu. “Scientists with many different areas of expertise, ranging from observations to theory to modeling, need to work in concert, and there are major bottleneck problems involved. To achieve our goal, we’ll be building and maintaining a fast-physics testbed and using a 3M (multi-scale, multi-model and multi-institution) approach to tackle the 3M (multi-body, multi-scale, and multi-type) scientific complexity.”

All the tasks will be performed under the umbrella of the Brookhaven Climate Consortium formed for the FASTER project, Liu added. 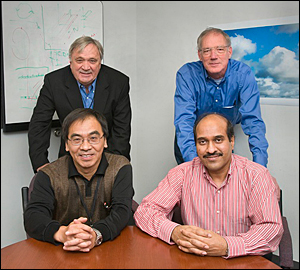 “This new program is an important addition to the portfolio of climate programs that we have at BNL as it will enable us to enhance our climate modeling capabilities at BNL,” said Peter Daum, acting ESD Chair. “We think that the partnerships that develop under funding from this program will open new avenues for collaborative climate-change research in the future.”

“For us, this new program is an exciting opportunity to apply our traditional areas of expertise, namely with the meteorological, microphysical, and chemical aspects of aerosols and clouds, by directing that process-level understanding towards the improvement of models for climate simulation,” said Bob McGraw, ASD acting head, who is part of the project.

A vital resource that facilitates this work is the massive amount of climate research data collected by the ACRF since the early 1990s at locations from the tropics to the southern Great Plains to the Arctic. These data cover clouds, radiation, and many other geophysical variables, and are critical for this project.

The workshop provided a great opportunity for all the investigators to assess implementation of the effort. More importantly, excellent ideas on research and project management also resulted from the meeting, Liu said. Two examples were to form focus groups to tackle specific problems as needed and to identify no more than six variables of top importance in climate model development as the first “fox to chase” by all the team members.

Said Alapaty, who visited BNL from DOE in Washington, DC, to attend the workshop and for discussions with Liu, Daum, and McGraw, “We anticipate that the outcome from this project will lead to major improvements in climate models. The number of scientists who attended the first FASTER workshop is an indication of how important accurate climate change projections are now considered worldwide.”