Linking Lava and ‘Rust’ to the Earth’s Evolution 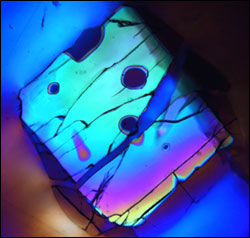 By examining microscopic crystals that once lived deep in the Earth, a team of scientists is chipping away at a big story – one that tells the details of the planet’s evolution. This research, conducted by University of Rhode Island researcher Katherine Kelley and Smithsonian Institution geologist Elizabeth Cottrell, helps explain why the Earth’s mantle is more oxidized at subduction zones – areas of the ocean floor where tectonic plates merge – than at mid-ocean ridges, where the plates spread apart.

“The availability of oxygen in the mantle controls everything from viscosity and the types of minerals found there to the kind of gases that are being put into the atmosphere by volcanoes,” Cottrell said. “This study helps us understand how the mantle and the Earth's surface interact and evolve over time.”

The oxidizing process, Cottrell explains, can be thought of as a “rust conveyor belt.” Similar to the metal on a bicycle or a car, iron in the oceanic tectonic plate also can “rust” (oxidize) when it comes into contact with the oxygen in seawater. As this plate moves across the mid-ocean ridge toward the subduction zone over millions of years, the rust builds and builds before slowly being transported into the Earth. 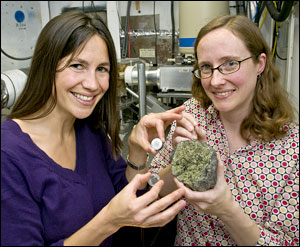 Researchers assume that this process adds oxygen to the mantle buried deep below the surface. Proof can be found in tiny crystals preserved in magmas, like a prehistoric mosquito frozen in a piece of amber. Inside these crystals is glass with dissolved gases from volcanic eruptions. However, because the samples are so small (no larger than 50 microns), researchers have been without a technique to analyze them – until now.

Working with researchers at the National Synchrotron Light Source (NSLS), Cottrell and Kelley fine-tuned a technique called micro x-ray absorption near-edge structure spectroscopy to determine the oxidation state of iron in a variety of glass samples from different tectonic areas.

“Every time we visited the NSLS, we asked for higher precision than the time before,” said Cottrell, who worked closely with University of Chicago researcher and beamline X26A spokesman Tony Lanzirotti to improve the instrumentation. “We ended up with an order of magnitude increase in precision, which made this micro-analytical tool just as good as a bulk tool.”

The researchers found that the oxidation state of iron in magma increases with the amount of water in the sample. It’s already known that the water found in the magma comes from the subduction zone. This work takes that concept a step further, showing that the oxidized environment also is transferred from the subducting plate to the mantle below.

The research was published in the July 31, 2009 edition of Science.

“This indicates that what happens on the Earth’s surface influences what goes on beneath it,” Cottrell said. “It’s one of the first steps in understanding if the mantle oxidation state is evolving over time.”

Funding for this study was provided by the Smithsonian and the National Science Foundation. The operation of the NSLS is supported by the Office of Basic Energy Sciences within the U.S. Department of Energy Office of Science.