Some people enjoy relaxing vacations at tropical beaches or scenic mountain resorts, but not Brookhaven physicist Johan Bengtsson. Bengtsson prefers trips to Antarctica, a place known for its harsh climate and barren landscape, where fewer than 200,000 people have dared to venture.

“I spent my first 25 years in Sweden and had always wanted to go to the North Pole for a research project,” said Bengtsson. 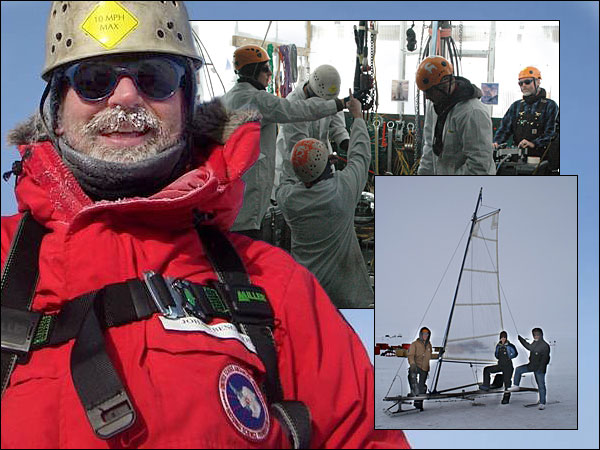 Johan Bengtsson working as a hot water driller for the IceCube project &mdash; a neutrino- detecting telescope being constructed at the Amundsen-Scott South Pole Station. Above: Bengtsson and colleagues deploying a string for the IceCube project. Below: Bengtsson (right) and colleagues display their newly constructed snow boat, which they built while working at the Amundsen-Scott South Pole Station.

Two years ago, his wish began to take shape when he heard about an “extreme science” project called IceCube -- a one km3 neutrino-detecting telescope that is being built deep into the ice at the South Pole. The National Science Foundation (NSF) funded project, like all Antarctic research, is regulated by the international Antarctic Treaty, which requires that the undertaking have minimal impact upon the region’s natural serenity and beauty.

IceCube seemed ideal for making Bengtsson’s dream expedition a reality, only at the opposite polar ice cap from the one he had envisioned, a slight 180-degree modification. He found the opportunity at a time when he was eager for a hands-on project, after working mainly on computer simulations to guide the NSLS-II conceptual design for four years.

Bengtsson applied for a hot water drilling position and has since spent his last two vacations in Antarctica’s frigid summer climate at the Amundsen-Scott South Pole Station. Working eight-hour swing shifts six days a week, Bengtsson was part of a team operating a hot water drill that used 200 gallons per minute of 190° F water at 1,000 psi to melt 8,000-ft holes in the 9,000-ft thick glacier.

After the ice-holes were opened, cables beaded with 60 sophisticated neutrino-detecting spheres, or strings, were then lowered into the 200,000 gallons of melted ice during the subsequent critical 24-hour period, during which the water begins to refreeze.

Bengtsson discovered that the protocol for working under extreme conditions was somewhat different than his previous projects.

“With five megawatts of thermal power in the drill head and working in temperatures 40 degrees below zero, if anything major happens you don’t try to fix it, you run the other way,” said Bengtsson.

When not testing his impromptu science abilities at the drill, Bengtsson spent most of his free time outside his fifty square-foot living quarters in search of exercise and entertainment. The tiny, eclectic ice-community offers mostly activities based on the seasonal workers’ interests.

During the last drilling season, the vast, empty scenery reminded Bengtsson of his sailing days, and he was inspired to construct a wind-powered snow boat in his spare time.

“It was like being on the ocean with the horizon surrounding on all sides,” said Bengtsson.

Despite limited resources in the isolated community, he and a colleague managed to scrounge up some plastic packaging materials and make a 130-square-foot broad-seamed sail.

After recruiting two more co-workers to help construct the frame, they completed the contraption just before the end of the last drilling season. Unfortunately, the wind picked up with enough speed to power the boat only once before he had to leave.

“Now, with the snow boat built and in need of further testing and improvements, I would really like to go back again,” said Bengtsson.

Next year is the last season that Bengtsson can work as a hot water driller since the telescope’s construction is nearly complete, with only twelve strings remaining to be installed. Even if it he is unable to return next year, he is hopeful that he will find a way back.

“The station could always use seasonal maintenance personnel,” he added.

In the meantime, Bengtsson has found that he really appreciates the comforts of his home and work life north of the equator.