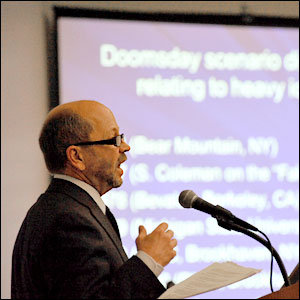 More than 1 billion people watched as CERN’s Large Hadron Collider (LHC) started up on September 10, 2008, a news event that MSNBC reporter Alan Boyle called “bigger than Britney.” He’s referring, of course, to pop star Britney Spears, whose re-entry to the music scene at the 2008 MTV Video Music Awards garnered about 60 news articles that day in September. The LHC, meanwhile, made the pages of the world’s press more than 4,000 times.

The fact that the LHC is the world’s largest and most powerful accelerator had a lot to do with the attention shift from the pop princess to particle physics, as did the prospect of discovering well-hidden physics superstars like dark matter, supersymmetry, and the Higgs boson. But a large segment of those watching the LHC’s very beginnings were likely interested in something else entirely: the creation of black holes, strangelets, and vacuum bubbles – “doomsday” scenarios centered around the massive machine.

“Of the billions who tuned in for the switch-on, I suspect that many were only interested in seeing whether or not we would be blown to smithereens,” said LHC physicist John Ellis, who spoke with Boyle and Stony Brook University Philosophy Department Chair Robert Crease at the 2010 annual meeting of the American Association for the Advancement of Science (AAAS). The “Doomsday Versus Discovery” symposium, hosted by CERN and Fermi National Accelerator Laboratory, was held on February 21 at the San Diego Convention Center.

During the session, Crease, who has documented many years of Brookhaven’s history, explained that science-based doomsday scenarios existed long before the LHC and that these predictions often reflect upon people’s fears and anxieties of the time. For example, Crease said, prior to World War I, two-thirds of the existing doomsday scenarios were based on natural causes, and after the war, two-thirds were tied to humans.

The possible dangers of producing “abnormal matter” in a collider were first discussed at a science conference in 1974 in Bear Mountain, NY, Crease said. Since then, the discussion – and associated outcries from the public and the press – continued at numerous accelerators, including Lawrence Berkeley National Laboratory’s Bevalac, Michigan State University’s National Superconducting Cyclotron Laboratory, and, most recently, at Brookhaven’s Relativistic Heavy Ion Collider (RHIC), where the question of Earth-swallowing black holes and matter-devouring strangelets first entered the arena.

As a last-minute attempt to stop RHIC from turning on, the facility was sued in federal court in 2000, while the purported dangers of the “Big Bang Machine” circulated through national and international media outlets. The machine’s safety was carefully examined by a group of distinguished physicists, who found no reason for alarm. The suit was dismissed. The collider started up. And the world keeps turning.

“RHIC didn’t produce strangelets, and, according to theory, the LHC will produce even fewer strangelets than what RHIC has not produced,” said Ellis, a member of the LHC Safety Assessment Group, which like RHIC’s safety committee, found no potential risks associated with its machine.

In fact, cosmic rays have been interacting with the Earth’s atmosphere at energies equal to or far exceeding those of LHC collisions for billions of years, Ellis said, and the planet still exists.

“It’s estimated that the entire LHC experimental program has already been conducted on Earth by cosmic rays about 100,000 times,” he said.

But the doomsday scenarios likely will continue throughout the future of the LHC and the next-generation of particle colliders, said Crease, who stands by history as the best defense against the perpetuation of these fears.

“The best thing you can do is hold up a mirror to them,” he said. “We have to expose the atmosphere in which these things get distorted.”