In honor of Women’s History Month, this is the third article in a series of profiles of women who are members of Brookhaven Women in Science. 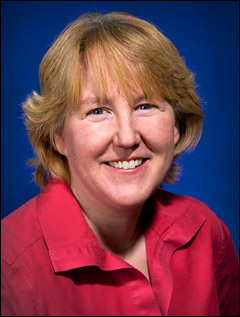 When Lynne Ecker came to Brookhaven Lab in November 2004 as an associate scientist in the Energy Sciences & Technology (ES&T) Department, she immediately joined Brookhaven Women in Science (BWIS). At a BWIS meeting that month, she heard that the group needed a volunteer to be the speakers’ coordinator for BWIS-sponsored lectures. She pitched right in to volunteer for the spot.

“As a graduate student, I received career advice from a national group, the Association for Women in Science, that helped me land my first job,” Ecker said. “I was glad that BNL had a women’s group where I could share ideas and meet new people. In a workplace as big as the Lab, it’s easy to become isolated in your own department, but it’s important to share ideas. It leads to growth, and often to greater creativity and productivity.”

Ecker earned a B.A. in physics in 1988, an M.S. in mechanical engineering in 1992, and a Ph.D. in solid-state science and technology in 1996, all from Syracuse University. Before she joined BNL, she worked as an engineer, and eventually as a scientist and senior scientist at Lockheed Martin’s Knolls Atomic Power Laboratory from 1995 to 2004.

Currently a scientist in ES&T’s Advanced Nuclear Concepts Office, Ecker studies materials used in advanced energy systems, such as nuclear and enhanced geothermal systems, under extreme conditions. She uses the National Synchrotron Light Source to characterize these materials to determine their structural and chemical makeup, important information for improving their performance.

Ecker was a member of the Child Development Center’s parent council in 2008, and currently, her sons, three-year-old Nathan, and nine-month-old Aaron are enrolled at the center, which BWIS fostered. She is grateful for the convenience of the center on the BNL site.

Along with Kathy Walker, Ecker is currently serving as BWIS Coordinator. She is looking forward to starting a new BWIS networking initiative on March 30. Results from a recent BWIS survey circulated among the Laboratory community indicated that a networking group would be welcomed for career growth. Speakers of interest to the Lab community will be featured at some of these networking groups.

“BWIS has had an important impact on the culture of the Lab,” Ecker said. “We are grateful for the support of Brookhaven Science Associates and the Diversity Office, but it is the members who keep the group alive and thriving. We invite the entire BNL community to join BWIS.”