In honor of Women’s History Month, this is the fourth and final article in a series of profiles of women who are members of Brookhaven Women in Science. 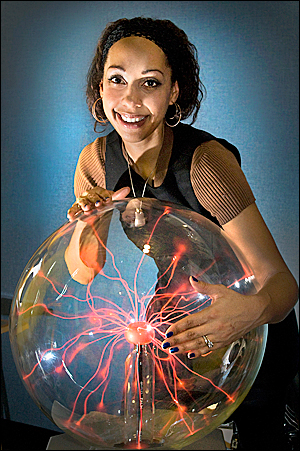 Kahille Dorsinvil, an educator in BNL’s Office of Educational Programs (OEP), thinks science is “cool,” and conveys that idea through teaching – with the aid of hands-on projects and exhibits – to elementary school children at the Science Learning Center.

“We have equipment and materials set up for students to explore, and we introduce and reinforce concepts aligned to the New York State school curriculum,” she said. “We also link the programs we teach to science at BNL.”

In addition, Dorsinvil travels to local schools to teach “Magnets to Go,” a popular program also linked to schools’ curriculum and Brookhaven science. “The children learn about magnets, and they are introduced to Brookhaven Lab,” she said.

Dorsinvil earned a B.S. in biology, anthropology, and African American studies from Stony Brook University in 1999. She worked for Computer Horizons Learning Center and Islip Tutoring Services before she started her career at BNL in 2006, thanks to OEP’s Renee Flack (now retired), who told her about the job opening for educator. When Dorsinvil was a high school freshman, she attended the Lab’s Minority Apprenticeship Program, which Flack coordinated.

While working, Dorsinvil attended Dowling College on a part-time basis, and she earned an M.S. in adolescent education in 2009. She also received accreditation to teach biology and general science.

In 2007, Dorsinvil became a Brookhaven Women in Science executive board (BWIS) member and volunteered to coordinate BWIS’s Career Day, an annual program that aims to interest young women in careers in science. In the program, approximately 50 female high school students from four local high schools listen to panel discussions by female Brookhaven scientists about their careers and research, and get an opportunity to ask questions and interact with them. Also, the students are treated to lunch, take a guided tour of Laboratory facilities, and enjoy hands-on exhibits at the Science Learning Center.

“Seeing instant mentoring happen between the women scientists and the students is great,” Dorsinvil said. “Historically, it’s been difficult for women and minorities to advance in science. At Career Day, multiple perspectives and networking create a lot of ideas and often a lot of enthusiasm for science. Also, the female scientists are excellent role models for the girls.”

Dorsinvil and her husband, Phil, have two daughters: Djane, age 15; and Sarina, age 10. “They are the best daughters in the world, and they love the Lab,” Dorsinvil said. They are interested in science, which pleases her.

“There are so many fields in science,” she said. “There is no limit to where you can go.”