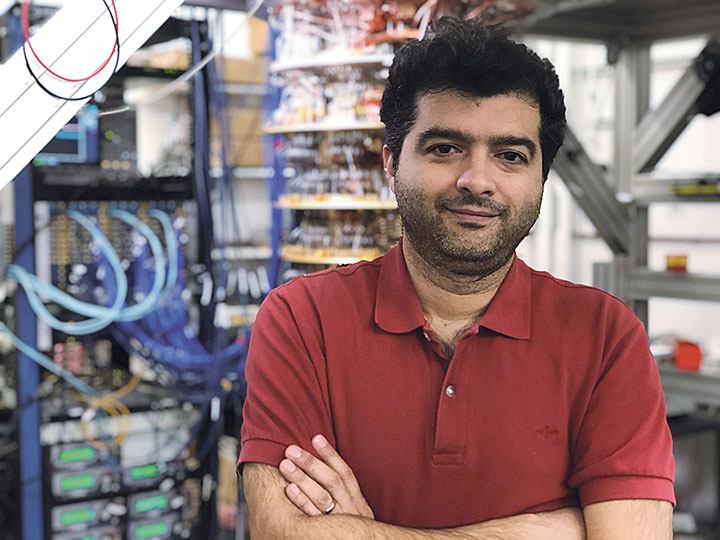 The talk is free and open to the public. Visitors age 16 and over must bring a photo ID.

The promise of quantum computers is that certain computational tasks might be executed exponentially faster on a quantum processor than on a classical processor. Roushan and other members of Google’s AI quantum team recently announced they had achieved “quantum supremacy,” with a system they estimate is capable of performing a specific calculation in three minutes that would take even the best classical supercomputer 10,000 years to complete.

Roushan will discuss the team’s computer, known as Sycamore, and the implications of quantum supremacy for the field of computer science and its applications.

“The promise of quantum computers is that certain computational tasks might be executed exponentially faster on a quantum processor than on a classical processor. A fundamental challenge is to build a high-fidelity processor capable of running quantum algorithms in an exponentially large computational space.

“Our Sycamore processor takes about 200 seconds to sample one instance of a quantum circuit a million times—our benchmarks currently indicate that the equivalent task for a state-of-the-art classical supercomputer would take approximately 10,000 years.

“This dramatic increase in speed compared to all known classical algorithms is an experimental realization of quantum supremacy for this specific computational task, heralding a much-anticipated computing paradigm.”

Add this event to your calendar.

In 2011, Pedram Roushan received his doctorate from Princeton University. His work included performing the first scanning tunneling microscopy on the surface of topological insulators in A. Yazdani’s Laboratory. After three years of post-doctoral studies in the J. Martinis Lab at the University of California, Santa Barbara, he joined the Google quantum hardware lab in 2014, aiming to create a quantum computer. His current research focuses on simulating condensed matter systems with engineered quantum platforms.