Back to the Basics: Studying Quantum Phenomena 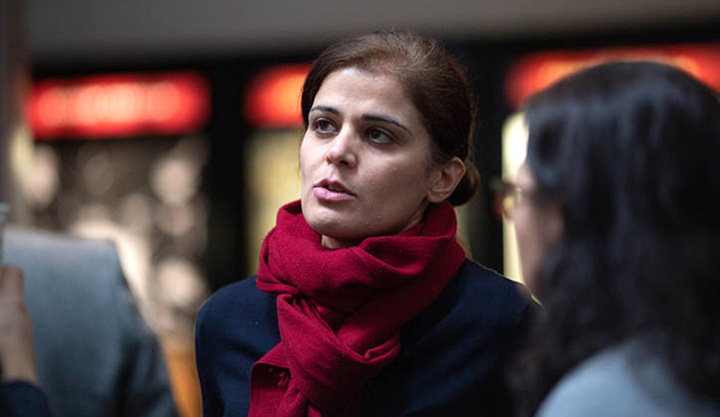 Despite being the most basic, most fundamental, and most underlying phenomenon that governs nature, there is nothing simple about quantum physics.

But somehow, theoretical physicist Layla Hormozi seems to understand the field in all its complexity with ease. Her passion for math and science, coupled with a desire to study the fundamental aspects of nature, is what led her to pursue a career in physics. After taking her first quantum physics course in college, she was “completely blown away.” Since then, Hormozi has studied and researched quantum theories at places including the Joint Quantum Institute at the University of Maryland and the Massachusetts Institute of Technology. Most recently, Hormozi joined the Computational Science Initiative at the U.S. Department of Energy’s Brookhaven National Laboratory, where she leads the quantum computing group.

Most people have some familiarity with “classical” physics theories, such as those about gravity, motion, and energy, that are seemingly responsible for everything that we commonly understand about nature. However, these concepts only apply to behavior at the macroscopic, or visible, level. Upon this realization in the early 20th century, scientists began to explore physics on a new scale. Quantum mechanics describes physics at the subatomic level—the behavior and mechanisms of atoms and their constituents.

Because subatomic particles make up atoms and atoms essentially make up everything in nature, quantum physics underlies nature’s true behavior. To Hormozi, this sense of foundational importance is what made studying quantum so appealing.

Quantum studies mainly focus on simulating subatomic systems in nature to learn more about them. What makes studying quantum phenomena so complex is the fact that the understanding of their outcomes is purely probabilistic.

In the physics we encounter every day, people can observe the behaviors of a given system. For example, we know that a soccer ball is moving towards the goal because we can see it. However, according to Hormozi, one cannot pin down what the outcome is going to be in quantum systems. They do not have the “deterministic nature” that classical physics systems have, she says. Quantum formulas that yield the outcome of a quantum system, that is, how it behaves, are based on the expectation that the outcome will occur. Therefore, the understanding of quantum systems is technically only backed by sound mathematics.

In addition to formulaic models, quantum computers can be used to simulate quantum systems. The idea is to design machines or systems in labs that effectively mimic a given physical process.

These simulations allow scientists to study the behavior a system exhibits during and after a process takes place. Conversely, the integration of quantum principles in computers is also being investigated. Quantum computers use programs based on quantum phenomena to perform computations that challenge even so-called supercomputers.

Currently, with her considerable understanding of math and quantum mechanics, Hormozi is working to make quantum computers less error-prone. Errors can and often do occur when quantum memory (in units known as qubits) is transmitted during computations. Encoding qubits with an error-correcting ability can prevent the memory from being incorrectly translated, making the computations more accurate.

Although she agrees that the application of the concepts she champions is important, Hormozi noted that the most important outcome research offers is gained knowledge. As someone who sees the beauty in math and is fascinated by nature, she accredits studying quantum theory as a great source of excitement in her life. She believes that the process of understanding quantum phenomena does not have to be designated to finding an application or mastering an understanding. Instead, Hormozi approaches researching the complicated nuances of quantum physics with a simple goal: learning for the sake of learning.