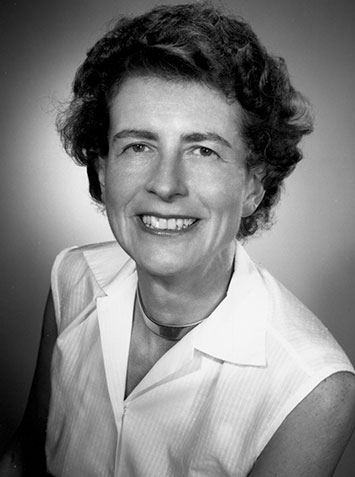 Brookhaven Women in Science (BWIS) is now accepting applications for the 2020 Gertrude Scharff-Goldhaber Prize. This year’s prize is $2,000, made possible by funding from Brookhaven Science Associates as well as generous support from Fred and Suzan Goldhaber and the Brookhaven National Laboratory Nuclear Particle Physics Directorate.

Scharff-Goldhaber was a pioneer both as a scientist and as a woman. In 1950, she was the first woman with a Ph.D. to be hired at the Lab. In 1972, she became the third female physicist ever elected to the National Academy of Sciences – at the time, Brookhaven’s only female scientist who was so honored. An original member of BWIS, she was named the first lifetime member in 1988.

This prize is granted to a female graduate student in physics who is recognized for her substantial promise and accomplishment. To be eligible, she must be an enrolled physics graduate student who is a candidate for a doctoral degree, but she should not have graduated with that degree before 2020. She must be performing her thesis research at Brookhaven Lab and/or enrolled in the Department of Physics and Astronomy at Stony Brook University.

Please apply using the online form. The application deadline is April 1, 2020. The recipient will be announced in June and the award ceremony will take place later in the summer.

Please contact BWISSGAward@bnl.gov or go to https://www.bnl.gov/bwis/scholarships.php for more information.