Vladimir Litvinenko, Thomas Roser, and Maria Chamizo-Llatas co-authored a paper describing a design for a possible future high-energy electron-positron collider in which an energy-recovery linac (ERL) recaptures and recycles both the particles and their energy.

As physicists developed plans for building an Electron-Ion Collider (EIC)—a next-generation nuclear physics facility to be built at the U.S. Department of Energy's Brookhaven National Laboratory for nuclear physics research—they explored various options for accelerating the beams of electrons. One approach, developed by scientists at Brookhaven Lab and Stony Brook University, was to use an energy-recovery linear accelerator (ERL). The ERL would bring the electrons up to the energy needed to probe the inner structure of protons and atomic nuclei, and then decelerate the electrons and reuse most of their energy. The R&D to develop the innovative ERL may end up having a major impact in a different area of physics—high-energy particle physics, where the power needs make its energy-saving features particularly attractive.

“The power consumption of scientific instruments for particle physics experiments has steadily increased. To perform sustainable research, physicists are investigating ways to reduce that power consumption,” said Thomas Roser, head of Brookhaven Lab’s Collider-Accelerator Department, one of the scientists developing the ERL approach.

In a paper just published in the journal Physics Letters B, the authors describe how their innovations could tame the power requirements of an electron-positron (e-e+) collider—a next-generation high-energy particle physics research facility under discussion for possible future construction in Europe.

The particle physics community is in the early stages of planning for a possible future electron-positron collider, including discussing various designs and locations. In each of these setups, the facility would bring beams of negatively charged electrons (e-) into collisions with their positively charged antimatter counterparts, known as positrons (e+), to conduct precision studies of the properties of the Higgs boson. That’s the particle discovered at the Large Hadron Collider (LHC) in Europe in 2012 that is responsible for imparting mass to most fundamental particles in the Standard Model of particle physics.

“Learning more about the Higgs particle’s properties and interactions with other particles would help scientists unravel the mechanism behind this important foundation of how our universe works, and possibly uncover discrepancies that point to the existence of new particles or ‘new physics,’” said Brookhaven physicist Maria Chamizo-Llatas, a co-author on the paper. 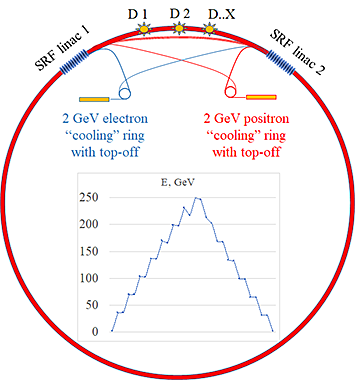 Possible layout of an energy-recovery linac (ERL) electron-positron collider. Beams of electrons and positrons would each be accelerated in stages during four passes through two superconducting linacs, moving in opposite directions through the 100-kilometer-circumference ring after each acceleration pass. When the particles reach maximum energy (250 billion electron volts, or GeV, as shown on the inset graph) they would be brought into collision in one of the detectors (D1, D2). After collisions, smashed beams would be decelerated and cooled in low-energy (2 GeV) accelerator rings before repeating the acceleration-collision-deceleration process over and over again.

One of the possible designs is a “storage ring” 100-kilometers in circumference based at Europe’s CERN laboratory (home to the 27-kilometer circular LHC). Beams of electrons and positrons would circulate through the storage ring continuously and collide repeatedly to produce the desired data. An alternate design would consist of two large linear accelerators that produce straight-line, head-on smashups.

Power requirements for both of these setups are approaching hundreds of megawatts, Roser said—enough energy to power hundreds of thousands of homes.

In a storage ring, Roser noted, lots of energy gets lost as “synchrotron” radiation, a type of energy emitted by charged particles as they change direction moving around the circle (picture the way water sprays off a wet towel if you swirl it around above your head). “The higher the energy, the greater the synchrotron energy loss,” Roser said—and the greater the need to make up that loss by adding more energy to keep particles colliding.

In a collider using linear accelerators, no synchrotron radiation is emitted. But the used beams are discarded after a single pass through the accelerator. That means that the beam energy, and also all the beam particles, are lost. More energy is needed to accelerate fresh particle beams over and over.

The Brookhaven and Stony Brook physicists say their energy-recovery and beam-recycling ERL components could solve key problems of both alternate designs. As described in the new paper, it would cut the electric power needed to operate the 100-km ring-shaped facility under discussion in Europe to one third of what would be required without an ERL. And, by refreshing particle beams while recovering and reusing their energy, it would eliminate the need to dump and replace beams while still allowing single-pass collisions of tightly packed particles for maximum physics impact.

The ERL would be made of superconducting radiofrequency (SRF) cavities, and act as “a perpetuum-mobile of some kind invented in 1960s by Maury Tigner at Cornell University,” explained Vladimir Litvinenko, a professor of physics at Stony Brook University with a joint appointment at Brookhaven Lab. “The main advantage of SRF cavities is that they consume very little energy while operating. They are perfectly suited to accelerate new particles by taking energy back from used particles,” he explained.

For an e-e+ collider, a multi-pass ERL would accelerate both sets of particles in stages to higher and higher energy each time they pass through the SRF linear accelerator. After each stage of acceleration, the particles would zip through a 100-kilometer ring-shaped tunnel back to the linear accelerator for the next stage of acceleration; electrons moving in one direction and positrons going the other way. Having the particles travel around such a large circular path helps to reduce the energy lost as synchrotron radiation.

“After colliding at the top energy, both electrons and positrons would give their energy back by passing through the same accelerator but in decelerating fashion,” Litvinenko said. “During deceleration, the particles’ energy is captured in the SRF cavities to be used for accelerating the next batch of particles.”

Importantly, not only the energy but also the particles themselves would be recycled after the collisions. Additional cooling components would ensure that the particles stay tightly packed to keep collision rates high but power requirements relatively low.

“By taming the need for power and reusing particles in an e-e+ collider, our design would allow scientists to perform cutting-edge research in a sustainable way,” Roser said.